Bring your ideas to life

You provide the ability and work ethic—we'll teach you the skills you need to join the ranks of the many successful screenwriters among BU alumni.

See what alumni do now

Stretch yourself creatively as you hone your writing skills. Write for different mediums and genres. Develop original ideas and adaptations, write episodes of existing television shows, and create one of your own. Learn the business side of screenwriting. Blend theory with practical understanding.

When Madi arrived on BU’s campus, she didn’t discover COM right away. She first enrolled in psychology, inspired by her love of the show Criminal Minds. When she realized that wasn’t the right fit, she switched into international relations, partly thanks to her obsession with the show Homeland. Still searching for the major that would be the perfect match, Madi explored journalism. She loved writing, but wanted to apply that passion in a different way. It suddenly became clear to her that the decisions she made were influenced by television. So why not write for television? Even though it took a few tries, once Madi found screenwriting, she knew she had found her home.

At the end of four semesters, you’ll leave with a strong, diverse portfolio and one of the few Screenwriting MFAs offered by a university today. Our MFA program prepares you to place, sell, and produce your work for film and television.

Since the MFA is a terminal degree, our students can gain teaching experience while also earning a paycheck through a graduate assistant position. Through teaching their own section of our undergraduate screenwriting course, our MFA students have gone on to adjunct and full-time teaching positions.

The graduate Screenwriting program is selective, small, intimate, and nurturing. There are only a handful of students, and our students grow together as a cohort – first, through three semesters of rigorous writing training in Boston, then while in the classroom as well as interning in their fourth semester in Los Angeles. The writing classes are small, providing every student with the necessary class time to workshop their scripts on a regular basis. This not only has a profound impact on the feedback students receive, but it has also proven to create friendships that follow many of our alums into their careers. BU’s award-winning faculty provide mentoring, lead script workshops, and facilitate in-depth feedback. The learning experience is personal—often one on one—with a faculty of accomplished screenwriters. Students also meet innovative film and television professionals through our Cinematheque screening series, where they share their work, discuss their careers, and address students’ questions.

Prepare to wear many hats

Ultimately, I aim to nurture screenwriting students to “become” all of the following: a storyteller, a filmmaker, a wordsmith, a lover of humanity and a truth teller.

Become fluent at whatever you do, so you can afford to be fearless. 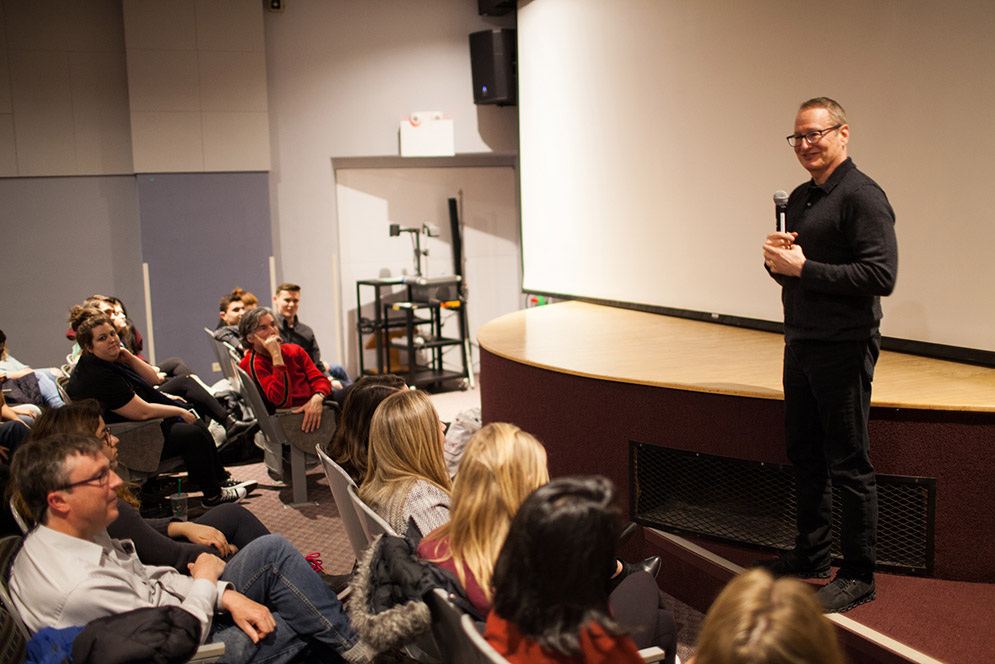 BU Cinematheque Gives Students a Glimpse into FX’s “The Americans”

With the explosion of the television industry, you’ll choose from courses such as Writing the Pilot, Writing the Sitcom, and Writing the Episodic Drama, among others. These courses position our students for TV internships through the fourth semester in BU L.A.’s “Writer in Hollywood” program.

The foundation of our program is writing for film. Courses in Writing the Short Film, three feature screenwriting workshops, Script into Film, and various genre writing courses have prepared our students to become award-winning writers.

In addition, students will learn to participate in story meetings with producers and write coverage for projects in various stages of development.

Explore Boston, “America’s College Town” and a major East Coast media and cultural center, and Los Angeles, the epicenter of the entertainment industry. Both cities are thriving global hubs and major media markets, providing a great introduction to the skill development and business that frequently lead to a graduate’s first job.

During your fourth semester, you gain valuable experience in the film business in Los Angeles, work with established writers, and network with our Los Angeles-based alumni. In addition, you take a Rewrite class where you revise a script you wrote while in Boston. Guest speakers share their experiences and answer your questions.

A sneak peek into the acting, writing, and production opportunities offered by the BU in LA program.

Bring your passion and your talent.

We’ll help you apply it. Screenwriting experience is not necessary to apply. What matters most is the ability and desire to tell stories and tell them well.