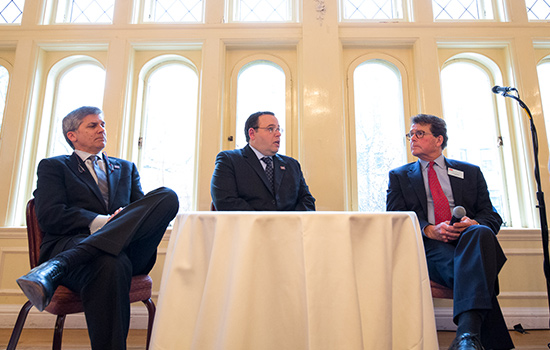 For the last 506 days, Washington Post Tehran bureau chief Jason Rezaian has been imprisoned in an Iranian jail, held on vague charges that include espionage. His employer, his family, and the international journalism community have condemned his imprisonment, contending that the charges are fabricated and his continued detention violates international law. He has now been detained longer than any previous Western journalist in Iran.

Yesterday, Rezaian was honored with the 2015 Hugo Shong Reporting on Asia Award, given by the College of Communication to an individual who has displayed the highest standards of international journalism on matters of importance specific to Asia. This is the sixth time the award has been given since it was established in 2005. Rezaian’s brother, Ali Rezaian, accepted the award at a luncheon at the Castle.

“We want to bring your attention to both a tragedy and a travesty,” dean Thomas Fiedler said at yesterday’s event. “Our hope is that by presenting this award to Jason, in a small way we can bring attention to this and perhaps lead to a positive result.” Throughout the ceremony, speakers commended Rezaian’s reporting for giving readers a fuller understanding of what Iranian citizens’ everyday life is like; his last story before being imprisoned was about the growing popularity of baseball in the country.

Workshop: Succeed as a Freelancer (Day 2)