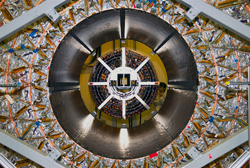 On July 4, 2012, it was announced that the long sought after Higgs boson particle was believed to have been found by the ATLAS and CMS experiments associated with the Large Hadron Collider at CERN. Boston University personnel have been heavily involved in the ATLAS experiment. The ATLAS experiment is conducted by a collaboration of more than 3,000 physicists from 174 universities and laboratories from around the world. Boston University and Harvard University are both part of this collaboration and jointly provide one of the five U.S. ATLAS “Tier 2″ computing centers: the Northeast Tier 2 Center (NET2). As a Tier 2, we are able to process multiple petabytes of data produced by the experiment and provide computing resources for both simulating proton-proton collisions and for analyzing the simulated and real data.

See more details on the Boston University work at the BU Physics site.

RCS provides support in the planning, implementation and ongoing operation of the ATLAS Northeast Tier2 cluster. The cluster has grown over time and currently has 112 nodes, providing 1120 CPU cores, supported by a 1.8 Petabyte filesystem and a 10Gigabit high speed network. On the software side, the workload is managed using the PBS batch system and OpenScienceGrid software suite. Most of this work is performed by RCS staff member Augustine Abaris.