Porting RESTMD in CHARMM to the Katana Cluster 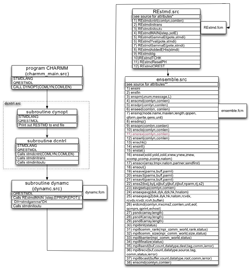 This goal of this work is to create a robust algorithm to sample the energy landscape of the methonine-enkephaline interaction. This involves combining two approaches: replica exchange (RE), a method requiring replicas that cover adjoining energy ranges should have substantial overlap of their energy probability distributions at the borders; and statistical temperature molecular dynamics (STMD), a method for dynamically adjusting the molecular dynamics forces to achieve an evenly sampled distribution. The RESTMD algorithm will be implemented into the Chemistry at HARvard Macromolecular Mechanics (CHARMM) source code via best practice modification of Dr. Robert Best’s (University of Cambridge) replica exchange module. Even with the basic ideas of RESTMD in hand, digging into the minimally documented, convoluted, legacy, multi-author CHARMM code and making the combination requires a computational chemistry and computer-science background. This tool will be used to simulate a larger coarse-grained system, such as a small flexible 120 residue section of the Chk2-PP2A system. With this we can visualize how DNA damage-induced phosphorylation events may regulate the interaction. Our initial test platform is ibm-aix (BU’s now retired IBM pSeries cluster); however, we have compiled, built, and run RESTMD-CHARMM as a 32 and 64 bit code on the Katana Cluster, which is an IBM blade server machine running the BU-Linux operating system.

Over several meetings, Shanadeen Begay, a Chemistry graduate student, and Yann Tambouret, an RCS staff member, met to diagnose several issues with the CHARMM compilation process on Katana. Yann researched a solution for porting binary, input files from Twister’s AIX operating system (OS) to Katana’s Linux OS, using a tool that took into account the endian differences between the systems. Since the Katana system has both GNU and Portland group compilers and two versions of MPI (OpenMPI and MPICH), users must declare specific environment variables that define which compiler/library combination they wish to use. Yann identified the correct environment variables and compiler flags needed for the compilation of Shanadeen’s custom version of CHARMM.

We have extensive documentation regarding the compilation of MPI-based programs on Katana, as well as a tutorial about using MPI in your programs. Feel free to contact us if you have questions about porting/compiling your code onto any RCS systems.