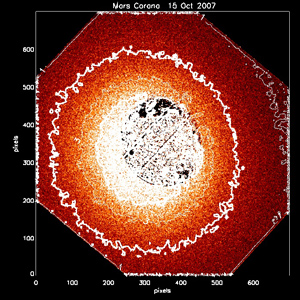 Mars is, perhaps, the only other object in the Solar System that has conditions suitable for supporting life. The recent discovery of Martian surface features indicating the existence of liquid water in the past has compelled scientists to investigate the history of Mars (Baker 2001). It is believed that the lack of a strong magnetic field on Mars might have led the solar wind to vaporize most of its atmosphere including the water present on its surface (Brain et al. 2010). Hydrogen atoms (H) from H2O, being the lightest element, diffuse into the farthest reaches of the Martian atmosphere, i.e. the corona from which the hotter ones escape via thermal processes like Jean’s escape. The solar wind also ionizes and strips off H atoms from this region through non-thermal processes. Investigation of the Martian corona would provide clues towards the rate at which various processes has aided in the depletion of the, once believed, thick atmosphere of Mars, and stripped off its supply of liquid water. 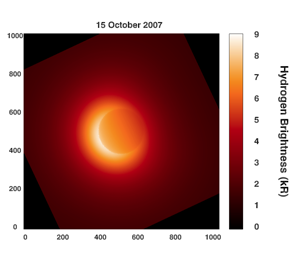 Simulation of the Martian corona using a Radiative Transfer Model

In this project we simulate the Hydrogen corona of Mars using a Radiative Transfer model first proposed in Quémerais and Bertaux, 1993 and used by Chaufray et. al, 2008. The model is then compared with UV imaging observations of the hydrogen corona taken with the ACS SBC instrument onboard the Hubble Space Telescope (HST). The input parameters to the model are adjusted to optimize the difference between model and data. From this study we can derive an escape flux of atomic hydrogen and thereby trace the history of escape of water from the atmosphere of Mars. This project is directly applicable to NASA’s MAVEN mission to Mars, which was launched on November 18, 2013 and will reach Mars on September 22, 2014.

Dolon Bhattacharyya of the BU Astronomy Department writes:
“The radiative transfer model was originally written in IDL on an APPLE Mac. However the model took more than 48 hours to complete a single run. Yann Tambouret of RCS helped parallelize the code for the Shared Computing Cluster, which now takes less than 2 hours to finish.

Katia Oleinik of RCS helped develop a CUDA program to create the final picture (as shown above) which takes approximately 5 minutes to run, instead of 8 hours on a desktop APPLE Mac.

With this significant jump in efficiency of computing time, we are able to run many more simulations with different modified input parameters without a long wait-time.”