Excited State Dynamics of Molecules in Liquids and Solids Our calculations study how photo-excited molecules relax in condensed phase environments. When molecules absorb visible or UV light they become electronically excited. This electronic excitation can result in breaking, reforming, and thus rearrangement of chemical bonds, as well as electron and energy transfer between various parts of a chemical system. Which of these different competing excited state processes occurs depends on the nature of the interactions between the excited molecule and its surroundings. Controlling the environment can thus enable the control of excited state chemical reactivity. The goal of our studies is to learn what aspects of excited state solute – solvent interactions influence excited state reactive pathways.

The simulations use “all atom” model excited state interaction potentials which are capable of accurately describing the mixing between the electronic states th at lead to electronic transitions. The probability that these transitions occur depends on the dynamical evolution of the system which is treated in our studies using an approximate mixed quantum – classical description in which the electro nic state occupation is treated quantum mechanically while the nuclei are treated using classical mechanics. The consistent coupling of these different degrees of freedom is achieved using a surface hopping non-adiabatic molecular dynamics method which describes the electronic transitions by allowing the nuclear subsys tem to hop from one electronic potential surface to another with a probability determined by the evolution of the quantum electronic subsystem.

In this study we wanted to understand why experiments showed that iodine molecules, I2, when photoexcited in simple liquids, dissociated about 3 – 5 times faster than in experiments conducted in simple solids. The experimental signals are reproduced in Fig. 1a. The oscillation in these signals result from the molecule vibrating in the initially excited state. The oscillation decays away because the molecule makes transitions out of this state. This occurs much faster in a liquid (upper panel), than in a solid environment (lower panel). These trends are reproduced well in our calculated results displayed in Fig. 1b. 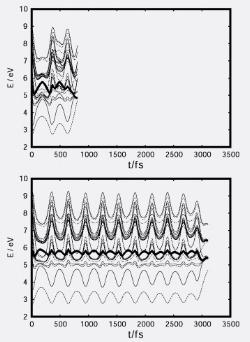 The movie segments present typical trajectories showing iodine molecule dissociation (purple balls) in both our liquid xenon (green balls) and solid argon (blue balls) solvents. In the solid we see many vibrations before the bond breaks while in the liquid, the bond breaks after one or two vibrations, then the iodine atoms hit the surrounding solvent and eventually are “caged” by their surroundings and recombine to reform the molecule in a different excited electronic state. Fig. 2 presents plots of the state energies calculated for these trajectories as functions of time. In the liquid (upper panel) the state rapidly relaxes out of the initially excited state while in the solid (lower panel) the molecule hangs up in the excited state for a much longer time. In these figures the state energies are shown as lines and the occupied state is indicated with a symbol so appears as a thick curve.

Our analysis reveals that this difference in electronic relaxation results due to the symmetry of the solvent environment in the solid. The initial excitation energy has to eventually start the molecule moving relative to the lattice which “breaks” the symmetry and results in mixing the electronic states. In liquids the symmetry is already broken because of the disorder in the environment and so the states can mix much more quickly.