Using mobile interventions can be a powerful tool for promoting continuing medical education among clinicians in resource-limited settings, according to a new study led by a School of Public Health researcher.

The study, published in BMJ Global Health, used a short message service-based (SMS) educational intervention to improve medical knowledge across a wide range of clinical domains among a group of Vietnamese HIV clinicians.

Clinicians in high-income countries are required to participate in accredited continued medical education (CME) activities, generally delivered through self-educational, Internet-based modules. For global clinicians, however, the challenge is that traditional CME, delivered through in-person training workshops, is resource-intense and frequently unaffordable in poorer countries.

In 2009, Vietnam passed a law mandating CME for clinicians to sustain licensure. Owing to limited resources, the country’s ministry of health subsequently acknowledged distance learning to be the most efficient method to implement the mandate—but did not offer specific ideas for how to conduct said learning.

Given the widespread use of mobile phones in the country, the researchers proposed an intervention using SMS messages to deliver CME information to clinicians in the country.

“Uncertainty about the best way to achieve high uptake and impact created an opportunity to test innovative strategies for distance learning,” the authors wrote.

The researchers enrolled 106 HIV clinicians from three provinces in the study. The clinicians were then divided into intervention and control groups. For six months, both groups received access to online CME courses and were encouraged to use them as often as they liked. However, only the intervention group received daily SMS messages with quiz questions, linked readings, and feedback messages on performance (see below). 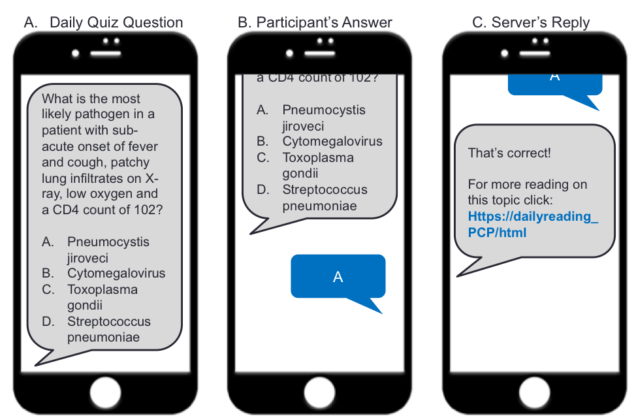 The study found was that participants who received the SMS texts were more than twice as likely to use the CME online courses. They were also more likely to increase engagement in self-study behaviors than the control group, including using medical textbooks, consulting with colleagues, searching the Internet, using specialist websites, and consulting with Vietnam guidelines on AIDS treatment. Participants who received the texts also did better on the exams, with 23 percent gains in scores compared to only 12 percent gains among the control group, and also reported higher job satisfaction.

“We see mCME as a novel pedagogical approach that is pragmatic, flexible, and generalizable, since our intervention has no inherent links to any particular content area, user group, or geography,” the researchers wrote.

The researchers also emphasized that the mobile-based interventions are not a substitute for primary medical education, but rather a tool to retain previously acquired knowledge and search for new information.

“By offering our users daily reminders of key concepts, facts and problems, it provides a daily series of reminders covering the scope and breadth of the core medical knowledge required, while highlighting current knowledge gaps or misconceptions,” the authors wrote.

The study was supported through a grant from the Fogarty International Center at the National Institutes of Health.

There are 2 comments on Texting Can Enhance Medical Education