Serotonin Keeps You Sad
and Sleepy

Neurotransmitter manipulation shows that an imbalance in serotonin may cause simultaneous depression and sleep disorder symptoms.

“I love sleep. My life has the tendency to fall apart when I’m awake, you know?” Ernest Hemingway had a not uncommon (though dreary) outlook on life.[1] As a patient diagnosed with clinical depression, he enjoyed the escape that sleep could bring. Unfortunately, unlike the famous author, many people with this condition find no more relief at night than they do during the day. In fact, a significant portion of depressed patients report sleep disorders as a secondary symptom, yet the existence of a biological link between the two problems remains uncertain.

However, hope exists for the suffering. One brain chemical commonly glorified in scientific literature, serotonin, plays a key role in both emotional stability and sleep patterns. While scientists debate the extent of serotonin’s involvement in the development of depression, most agree that the neurotransmitter clearly plays some role in the psychological disorder, albeit one more complex than initially presumed. And depression isn’t the only disorder linked to serotonin—recent studies have identified a relationship between serotonin and sleep disorders like insomnia and sleep apnea. So what does this neurotransmitter do? And why are these links important?

Serotonin, like every other neurotransmitter, is a molecule used to communicate in the brain. When released by a neuron, it travels to the next brain cell, which can either absorb it or block the molecule from entering. If allowed entry, serotonin will prompt its own release by the new cell, triggering a pathway throughout the brain that will eventually lead to the regulation of emotions and circadian rhythms. If blocked, the serotonin pathway (and in turn any change effected by it) will not occur. With this basic understanding of serotonin in mind, let us move on to discuss the neurotransmitter’s role in sleep and depression. 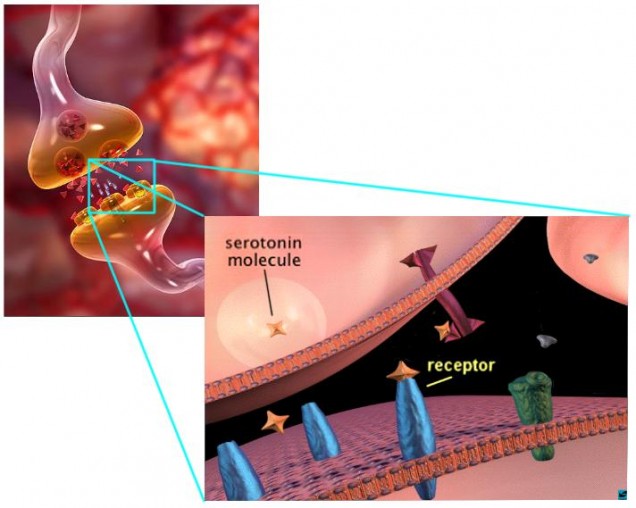 Figures 1 & 2. The meeting of two neurons, called a synapse, where serotonin is
sent out of one neuron and absorbed by another through specific receptors.

As previously discussed, the movement of serotonin across neurons creates a pathway, which in turn regulates a behavior. However, serotonin is not confined to one route and one set of neurons—various areas in the brain utilize the neurotransmitter to send different messages through the nervous system. In 2000, the American Journal of Medical Genetics published an article that related a specific gene to suicidal tendencies, demonstrating the result of one failed pathway. This gene codes for a serotonin receptor (5-HT2A), a molecule that rests on the edge of a neuron waiting to send serotonin into the cell. With a faulty receptor, the cell cannot accept serotonin, which blocks the normal pathway and prevents any regulation of behavior. The serotonin receptor discussed in this research does not allow passage of serotonin into the neuron as it should, and individuals whose bodies produce this receptor tend to have depression with suicidal ideations (Du, et al.). This research did not find a direct relationship between a decrease in serotonin and a problematic symptom; after all, at least seven types of serotonin receptors exist, so the failure of one does not lead to a complete loss of serotonin circulation in the brain (Frazer 1999). However, the breakdown of a receptor can lead to the breakdown of a pathway, and the “significant association” between the serotonin receptor gene and suicidal tendencies suggests that the serotonin pathway allowed by this receptor affects emotional stability and happiness (Du, et al. 2000). Without the pathway, serotonin can still travel throughout the brain, but it does not act on the same regions that it would reach via the 5-HT2A receptor, and therefore the same behaviors will not necessarily occur. Though it may not have an impressive name, this one receptor (and the serotonin it receives) has quite an important role in securing our mental balance.

Like many neurotransmitters, serotonin has more than one message to convey to its targets in the brain. Twelve years after the completion of the previous study, researchers continued to examine the effects of altered serotonin on behavior, using technology and methods that were unavailable during Du’s experiment. In the June 2012 publication of the European Journal of Neuroscience, a study involving the brain chemistry of mice found that serotonin depletion disrupted the circadian rhythm of sleep-wake cycles without actually decreasing the cumulative amount of sleep in mice. Rather than exhibiting insomnia symptoms, mice with abnormally low serotonin levels woke twice as frequently as control mice while sleeping for the same overall amount of time (Nakamaru-Ogiso, et al.). This finding, which opposes previous understandings of the relationship between serotonin and sleep, clarifies one of the key concerns about serotonin and sleep patterns. In previous scientific literature, some studies suggested that a decrease in serotonin led to insomnia, while others argued that serotonin depletion led to lethargy. This new result explains how both conclusions, though incorrect by themselves, can and do occur outside of the laboratory setting: by disrupting the circadian rhythm of sleep-wake cycles, an imbalance in serotonin leads to restless sleep during which the subject wakes often, leading them to lack sleep at night and desire sleep during the day.[2] While the mice studied in the aforementioned experiment share many biological and physiological characteristics with humans, including brain chemistry, they do not share their ability to nap throughout the day with us. So while mice use daylight hours to make up for their wakeful nights, humans with similar serotonin problems have to fend off yawns with coffee and candy bars.

We know that an imbalance in serotonin can upset circadian rhythms, and we know that improper circulation of serotonin can lead to suicidal thoughts . . . but beyond the scope of scientific inquiry, what significance do these discoveries have on medical advancements? To answer this question, let us revisit the dilemma introduced at the beginning of this article. According to articles from Biological Psychology, Journal of Psychosomatic Research, SLEEP, and Psychosomatic Medicine, sleep problems and depression seem to occur together more often than not. Sleep disturbances “belong to the core symptoms of the disorder,” so it follows that one biological cause might exist for both symptoms (Riemann, 2011). While scientific literature floods with research presenting correlations between sleep and depression, sleep and serotonin, and depression and serotonin, one has to ask: could irregular serotonin regulation trigger both depression and sleep disorders?

First, let’s take a step back and consider the “common sense” approaches to why depression and disturbed sleep exist together with such frequency. Some believe that those who lack restful sleep cannot perform to their greatest potential during the day, and therefore find themselves stressed and anxious, eventually leading to depression. Others see the flipside of that scenario, i.e. those with depression have problems falling and staying asleep due to stressful thoughts and nightmares. While both situations make sense at some level, they ignore the biological facts that we now know play a significant, if not primary role in the development of psychiatric disorders. In a twin study, scientists concluded that 58% of coexisting depression and sleep disorders developed due to gene expression, and while studies vary on exact values, the general trend demonstrates a relationship between genetics, depression, and sleep problems (Gregory, et al. 2011). If biology so clearly points to a genetic basis of these symptoms, certainly some biological product must cause them, which brings our discussion back to serotonin. Considering all three relationships—that between sleep and serotonin, that between depression and serotonin, and that between sleep and depression—we can begin to draw inferences that will lead us to medically pertinent conclusions.

We know that depleted serotonin can lead to a disruption of circadian rhythms. We know that a lack of serotonin absorption by neurons can lead to plans of suicide. Finally, we know that disrupted sleep occurs commonly in depressed patients, and that this association is usually genetically based. Nonetheless, we have yet to identify the root of the problem. Scientific literature does not state that depletion in serotonin causes the disruption of circadian cycles, nor does it state that the irregular serotonin receptor causes suicidal thoughts. However, with so many journals recognizing at least one of the correlations between the two symptoms and a serotonin imbalance, it is not unreasonable to presume that serotonin might be at the source of the coexisting conditions.

Scientists have generally accepted serotonin as a regulator in the sleep-wake cycle, but a fierce debate over its relationship with depression still exists. Some researchers, such as Alan Frazer at the University of Texas, don’t think serotonin has much role at all in the development of depression. Others, including Joseph Coyle of Harvard Medical School, assert that a relationship between serotonin and depression—though complicated—clearly exists (Spiegel 2012). This debate, while important to the eventual understanding of how our bodies work, does not necessarily help the advancement of treatments for the two disorders. It also narrows the critical lens to each individual relationship, but as we can see, a broader scope exists which demands consideration. When considering the three relationships previously mentioned, serotonin takes on a much greater role in the body than it has in individual pathways.

We cannot state that an imbalance in serotonin, whether by depletion or misdirection, causes every case of depression or restlessness. But for the cases that include both depression and sleep disruption arising from genetic expression, we can conclude that an imbalance in serotonin causes the disorders. With this understanding, scientists can work to develop medicines that reach the source of both symptoms, rather than treating them as separate disorders. Though Hemingway’s only respite came in permanent sleep, future sufferers could have a healthy alternative to painful days and restless nights. By acknowledging imbalanced serotonin as a major contributor to coexisting depression and sleep disorders, scientists could provide new patients with the relief that Hemingway never experienced.

1. Ernest Hemingway eventually succumbed to his depression, committing suicide in 1961. He was not the first to do so in his family—his father, sister, and brother died in the same manner. The coexisting conditions imply that inheritance (and therefore genetics) factored into the development of these depression cases. (Source: Running From Crazy. Dir. Barbara Kopple. Perf. Mariel Hemingway. 2013.)

2. To clarify, an imbalance in serotonin does not make daytime sleep more restful than nighttime sleep. The disruption of circadian rhythms causes frequent awakenings during all periods of rest; however, the restlessness at night increases a patient’s need for sleep during the day.

Related to Serotonin Keeps You Sad
and Sleepy