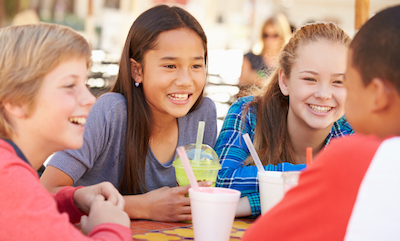 In the study, published in the International Journal of Behavioral Nutrition and Physical Activity, participants in the pilot program at the Boys and Girls Club (BGC) of Worcester, Mass., and their parents consumed fewer sugary drinks and more water over a six-month period than children and parents at a demographically-similar BGC in a nearby city.

“Youth created their own narratives around why it was important for them—not their parents, teachers, or researchers like myself—to change the types of beverages they were drinking,” says study lead author Monica Wang, assistant professor of community health sciences. “This type of empowerment strategy recognizes youth as experts in their own lives, and may be particularly engaging for youth of color.”

After a training from Wang and her colleagues, BGC staff in the pilot study led an ethnically-diverse group of nine- to twelve-year-olds in activities that promoted replacing sugar-sweetened beverages with water, including blind taste tests of flavored water, a corner store scavenger hunt, and role play skits about ways to drink water and what to do when tempted by sugary drinks.

The staff also guided the participants in creating written, audio, and video narratives to promote replacing sugary drinks with water and provide strategies for doing so. The children then taught their parents or guardians what they had learned each week and shared their narratives. The children also led a culminating BGC community event at the end of the six-week program, featuring their narratives and taste tests.

The researchers had found that over half of the youths at both BGC sites were considered overweight or obese before the pilot program began. Six months after the program, the researchers found that the participants from the Worcester BGC had decreased zBMI scores (an adjusted body-mass index measurement that takes into account how children grow) compared to the children at the other site.

“Most obesity prevention programs target multiple behaviors, but we found that a youth empowerment program targeting one dietary behavior could prevent obesity risk among youth,” Wang says. “Reducing sugary drinks through youth empowerment may be a promising starting point for families to engage in additional healthy eating efforts down the road.”

The authors wrote that the program has great potential for scaling up statewide, since it used existing BGC infrastructure. In fact, they reported, the Worcester BGC staff continued to implement the program on their own after the study ended. The enthusiasm goes beyond Worcester, Wang says: 12 BGCs across Massachusetts have expressed interest in the program for a future, larger-scale study.

The study was co-authored by Marisa Otis, who was a student and senior research assistant in community health sciences while working on the study. The other co-authors were Milagros Rosal and Stephenie Lemon of the University of Massachusetts Medical School, and and Christina Griecci of Tufts University Friedman School of Nutrition Science and Policy.