Most of us who have grown up educated in the United States are fed a stereotype of what a “Native American” is: when we hear the term, we picture feathered headdresses and cabins or teepees residing far away in nature. We’ve been given the impression that “real” indigenous people are the romanticized and crafted image of friendly gift givers, and that they’re far removed from our society today. However, this image is false and ignores the state of indigenous peoples’ societies today. If indigenous peoples are written out of the spotlight and attention, how can they fight for their rights and improve their reality?

We Still Live Here: Âs Nutayuneân, by Anne Makepeace, follows Jessie Littledoe Baird as she recounts her efforts in bringing the lost Wampanoag language back to life, learning and teaching Wampanoag culture in the process. The film aims to change the fundamental ways we view indigenous communities and nations, carefully crafting a message to combat the stereotype and stigma built up over centuries. Bill Nichols’s Introduction to Documentary, Second Edition describes an expository documentary as one that “emphasizes verbal commentary and an argumentative logic” (31), focusing on communicating information in every way to the audience. We Still Live Here uses the expository mode, but rather than presenting an argument up front or textbook-style narration, it is instead selective in what information is conveyed. Through its unconventional approach of omitting certain photos and editing in a way that emphasizes and clarifies Baird’s story, the documentary is able to deliver an unclouded yet not obvious point: that people of indigenous heritage, no matter who they are, can empower themselves by embracing and reviving their culture to transform the definition of what it means to be a “Native American.”

We Still Live Here is unconventional in the way it puts together its story, maintaining its credibility while shifting its focus onto Baird’s personal journey. Expository documentaries usually feature “omniscient voice overs by professional male commentators” (Nichols 31), placing an emphasis on delivering a wealth of information. History is often presented in a series of facts, “with relative indifference to the specific individuals or situations captured in order to shape proposals or perspectives” (Nichols 157). We Still Live Here clearly contradicts this: there is no narrator, and the entire film is centered around Baird. However, the film still employs information as needed, while still making her story as compelling and emotional as possible. For example, when Baird recounts her vision of her ancestors talking to her, she determines that they mentioned yellow fever. Then, some of the limited historical background given in the film is the statistic for deaths from the disease in the Wampanoag population in 1616. The delivery is impersonal, but interviews are included to help viewers empathize with the severity of the outbreak, and how indigenous people feel about it today. The information is then controlled and reined back in for the story to continue. The audience is not given extra historical facts to provide it with biases and distract from the narrative. In this way, the credibility and clarity are preserved while continuing to build an emotional background. Only enough historical evidence and interviews are provided for context, and the different forms of media are combined to paint the picture Baird’s story needs.

Beyond the structure of the film, the content, or rather the deliberate choice not to use certain content, also lends clarity to the ongoing image of indigenous people being formed. Nichols states that documentary filmmakers must decide “whether to use archival or other people’s footage and photographs or only those images shot by the filmmaker on the spot” (72). In many history documentaries, a main goal is to give the audience a deeper connection to the setting. To achieve this, the production may use pictures or footage from the time of the events. One might expect that when Baird talks about the lost Wampanoag language and culture, depictions of those traditions would be shown. However, very few pictures or primary sources are offered to help viewers grasp what exactly was lost. Even with regard to the use of text documents to reconstruct the language, the main subject of the film, only colonial sources such as the Bible, in Wampanoag print, are shown.

This is due to both the scarcity of historical depictions of Wampanoag and the nature of those depictions. On the Mashpee, Tribe of Gay Head, and Seaconke tribe websites, information is only provided in text without pictures to accompany, suggesting that photos or drawings from within the tribes are nonexistent or not released to the public. Outside of the tribes, the Library of Congress does have numerous centuries-old sources. However, those sources would only lower the credibility of the documentary, since many of them depict figures or events centuries before the creation of the artwork. Additionally, the pictures often depict indigenous people in a degrading manner. For example, one piece titled “The Palace of Massasoit” shows a small ramshackle hut, with a lone figure, presumably Massasoit, standing next to it. The condescending title references Massasoit Sachem, the chief of the Wampanoag when the Pilgrims arrived in the New World (“About Massasoit”). The drawing itself is from 1857, so rather being based in truth, it is a figurative depiction that casts an important leader in a negative light (“The Palace of Massasoit,” 1857). Instead of using pictures like these that belittle indigenous history and propagate the stereotype, the film uses its own animations, which, despite not conveying many cultural details, are not harmful to the film’s stance. If the pictures had been used, the audience might adopt the stereotype as a representation of the “real” Wampanoag people, and the current efforts to revive the culture would seem false. Outsiders would expect that the community become exactly like the images and the texts suggest, or they would not really have succeeded at being Wampanoag. 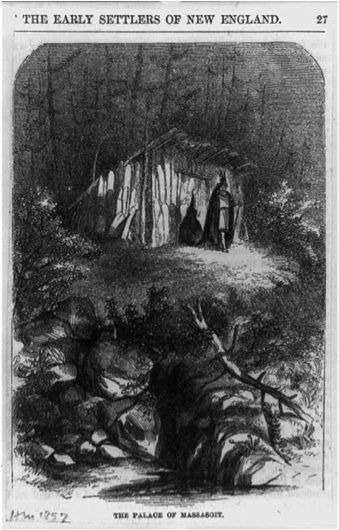 There is an additional distracting effect that would come with using older pictures. In An Indigenous Peoples’ History of the United States, Roxanne Dunbar-Ortiz discusses one aspect of ingrained colonialism that historian Jean O’Brian has termed “lasting” (9). The idea that Native Americans are no longer prevalent in our society is promoted by commemorations of “last” events involving indigenous people. We begin to associate a sense of ending with indigenous peoples after seeing places dedicated to people who are no longer there, or tribes that are no longer existent. If the filmmakers had shown old images of the “last” Wampanoag in a wholly traditional setting, it would only fuel this mindset. Instead of focusing on the new beginning that Baird is leading, we would only see the past coming to an end.

Avoiding colonially influenced media allows the documentary to avoid stereotypes, but is the film able to actually combat them? Americans are taught a certain indigenous narrative from early in their education, so attempting to reduce this ingrained colonial mindset of US citizens would be no small feat. One way the documentary is able to combat this bias is by changing people’s ideologies from the foundations. In J. Kēhaulani Kauanui’s interview of Patrick Wolfe on settler colonialism, they discuss “blood quantum,” the idea that white settlers used peoples’ lines of descent to their own advantage with ambiguous definitions (242). Whereas anyone with even a small percentage of African heritage was considered black and used as a slave for economic advantage, any indigenous person even slightly of white descent was designated white, in the goal of eliminating indigenous peoples. This, along with an oppressive narrative and image of indigenous people, is forged in our minds early on. We Still Live Here not only avoids those prejudices by omitting pictures, but takes steps to counteract them. At the end of the film, as the Wampanoag community holds a festival with traditional dances and clothing, it struck me as very likely that few of them were completely of Native American heritage; for example, several participants are clearly of mixed African and indigenous ancestry. In order to undo the destruction blood quantum had caused, the definition had to be reversed. Perhaps the filmmakers decided to only show indigenous peoples’ descendants as they are now for this reason. If everyone is unconsciously of the mindset that Native Americans must look like we expect and stereotype them to, we are still perpetuating the harmful prejudices. Herein lies the film’s subtle message: the Wampanoag community is undergoing a cultural revival, and they will take a new shape that will discard historical stereotypes and may radically shape our image of indigenous peoples. By not only denouncing the stereotypical image by omitting historical depictions but providing a new image of Wampanoag to the audience, the documentary attacks the definition of indigenous peoples and reminds us of their very current presence in our world.

By not exactly fitting the model of an expository documentary (Nichols 31) due to its omission of historical depictions of Wampanoag people, We Still Live Here is instead able to increase the credibility and clarity of the film’s underlying message. The story of Jessie Littledoe Baird is given context and supportive evidence while avoiding the same colonially influenced lens with which textbooks and visual depictions may display history. As the Wampanoag cultural and linguistic revival is brought into the spotlight, a new and current image of indigenous community is created to reverse centuries-old prejudices.