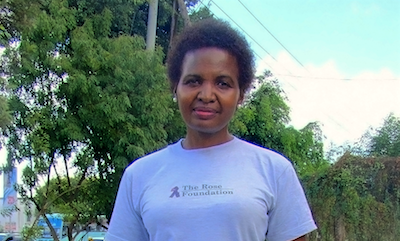 From late February into March, two Kenyan men—Ian Lai and Thomas Rajula—walked almost 300 miles in sweltering heat from Mombasa to Nairobi to raise awareness of domestic violence in their country, and to challenge men to take part in its prevention.

The three-week trek brought nationwide attention to the issue, but community action needs to accompany that awareness, says Esther Kisaghu (’06), founder and chair of the Rose Foundation, the organization behind the walk.

Named after Kisaghu’s late mother, a community activist, the Rose Foundation was created in 2015 to work against gender-based and domestic violence in Kenya as a public health issue, applying community-based intervention methods Kisaghu learned at the School of Public Health.

After fleeing an abusive husband from a powerful political family, and bringing their son with her, Kisaghu says she could not remain in Kenya. She had been working for Kenya’s National Hospital Insurance Fund, and explains SPH offered a way to further her public health career 11,000 miles away. It was an opportunity, she says, to “keep safe and begin rebuilding my life.”

It was here Kisaghu says she learned domestic violence, like other public health issues, is preventable. “It was a great revelation,” she recalls. “It gave me a renewed sense of my purpose and passion. I could prevent what befell me from befalling others.”

While completing her MPH, Kisaghu volunteered with shelters and domestic violence organizations in Massachusetts. After submitting her thesis—on domestic violence in Kenya—Kisaghu remained in the state for another year to work at Transition House in Cambridge and Casa Myrna in Dorchester.

Immersed in domestic violence work here in Massachusetts, her home country was always in mind. “I could transfer what I learned in the U.S.A. to Kenya,” she remembers thinking.

Still, Kisaghu says she couldn’t safely live in Kenya yet. She came back to the country via Tanzania, staying for only six months before relocating to Rwanda, where she spent two years working with Generation Rwanda, which supports higher education for Rwandans orphaned by the 1994 genocide.

“This was my healing time as well,” Kisaghu explains. “I was battling severe depression. I had left my son behind in the US, and that was a very difficult thing to do.” (Her son is still in the US, waiting to finish college before he returns.)

Kisaghu says her divorce took 11 years. When, in 2012, the divorce finally went through, she returned to Kenya and began looking for a way to apply what she had learned at SPH.

In 2014, Kisaghu published a book about her experience, The Triumph of My Life: Domestic Violence and Society’s Thundering Silence. In 2015 the Rose Foundation was finally registered as a nonprofit.

The walk from Mombasa to Nairobi brought plenty of attention to the new organization, Kisaghu says, with coverage by the country’s biggest newspaper and a number of radio stations—but awareness is only the beginning.

Last October, Kisaghu met with local leaders in Kajiado County to begin the Rose Foundation’s pilot project. Kisaghu says rates of domestic violence—and gender-based violence in general—are especially high in Kajiado, and the pilot engages local leaders, schools, and churches in education and prevention activities. With the new momentum from the walk, Kisaghu says the project will ramp up in May.

Kisaghu notes this community-based initiative draws from the social and behavioral sciences courses she took at SPH. “The Rose Foundation’s training and community outreach heavily relies on behavior change models,” she says, “changing attitudes and perceptions, which in turn change behavior.”

The Rose Foundation is also planning support and consultancy for programs already implementing domestic violence services across the country.