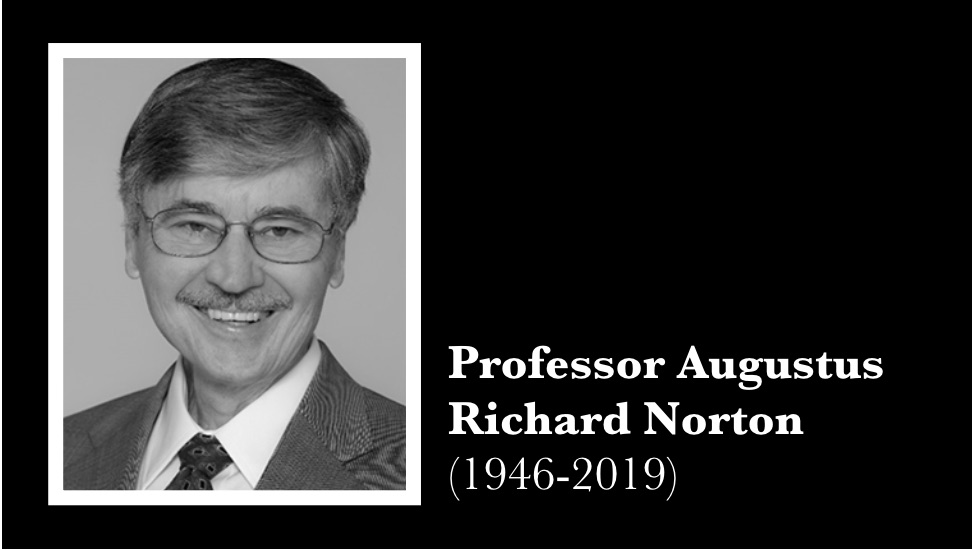 Norton (Ph.D., University of Chicago, 1984) joined the faculty of the then Department of International Relations at Boston University, where his research interests focused on strategies of reform in authoritarian regimes in the Middle East and renewal in reformist Muslim thought. In 1996, he was also appointed to the faculty of the department of anthropology.

“Professor Norton was a mentor to me, and so many others,” said Pardee School Dean Adil Najam. “When I joined Boston University as an Assistant Professor, my first office was right next to his. To me he personified dignity and integrity. I learnt from him that to be a professor is a privilege and a responsibility that must always be taken seriously. He demanded high standards from all around him, and held himself, always, to even higher standards. Today, I can look back to so many ways in which he helped shape what has now become the Boston University Pardee School. Dick Norton will be dearly missed.”

At his recent retirement from the BU Pardee School in May 2017, Pardee School Professor of International Relations and History Houchang Chehabi presented the following tribute on behalf of his faculty colleagues:

In the 1990s Norton headed a widely-cited three-year project funded by the Ford Foundation that examined state-society relations in the Middle East and the question of civil society in the region. The project resulted in his edited two-volume study, Civil Society in the Middle East. Perhaps his best-known book is Hezbollah: A Short History (2007). In a review in the Washington Report on Middle East Affairs, Margeret Hall called it “the most fluent survey of Hezbollah to date.” Publishers Weekly described it as a “remarkably thorough, articulate portrait of Hezbollah” that is “also personal, speckled with anecdotes from more than three decades of experience.”

His experience in the Middle East included residences in Bahrain, Egypt, Jordan, Kuwait and Lebanon. Prolific as a policy commentator, his writings focused on inter-sectarian relations in the Middle East, reformist Muslim thought, and strategies of political reform and opposition in authoritarian states. In 2006 he was an advisor the Iraq Study Group, also known as the Baker-Hamilton Commission. He was also a member of the Boston Study Group on Middle East Peace.

Norton’s books include Hezbollah: A Short History, the two-volume collection Civil Society in the Middle East, Amal and the Shi’a: Struggle for the Soul of Lebanon , The International Relations of the PLO (senior editor), Political Tides in the Arab World (co-author), UN Peacekeepers (co-author), and Security in the Middle East: New Perspectives (in Arabic). His articles have appeared in Current History, Foreign Policy, International Spectator, Journal of Palestine Studies, Middle East Journal, The Nation, and in leading newspapers.

Born in Brooklyn, New York, on September 2, 1946, he was commissioned from the ranks in 1966 and served in the U.S. Army until he retired in 1993, as a colonel. He served two combat tours in Vietnam as an airborne infantry officer – as a platoon leader in 173rd Airborne Brigade, 1968-69, and senior adviser to First Battalion of Vietnamese Airborne Division in Vietnam, 1970-71. Later, in 1980-81, he served as an unarmed United Nations observer with the United Nations Truce Supervision Organization (UNTSO) in southern Lebanon. In 1981, he joined the U.S. Military Academy at West Point, NY, and taught there till 1993, rising to the rank of Professor of Comparative Politics and Middle Eastern Studies.

“Richard was a dedicated mentor, colleague, and scholar who challenged prevailing narratives about the people and places of the Middle East,” said Shamiran Mako, Pardee School Assistant Professor of International Relations. “His experience in the region enabled him to analyze socio-political conditions from a multifaceted angle, adding nuance to complex events while, simultaneously, never underestimating the power of people to challenge well-entrenched obstacles. Although the Middle East studies community has lost a pillar, his legacy is permanently etched in his life and work and in a generation of scholars whom he has influenced.”

“Richard was a true scholar,” said Pardee School Associate Dean for Academic Affairs and Professor of International Relations William Grimes. “He held himself to a high standard of rigor and inspired the rest of us to do the same.”

“Richard Norton has been a dear friend and colleague for a quarter century, and it is with great sadness that I received the unexpected new of his passing.  May he rest in peace,” said Robert Hefner, Pardee School Professor of Anthropology and International Relations. “Richard brought warmth, humor, and a depth of experience to the Pardee School and the Department of Anthropology, where he had joint appointments.  For those of us who worked on policy and world affairs in the Muslim world, Richard was the model of how to combine the finest quality academic work with principled policy and political interventions.   I lost track of the number of times we were in Washington at policy events together over a 20 year period; perhaps 40?   But he was always in the lead.  He was also someone who had that rare ability to speak to and influence policy analysts and politicians from a broad portion of the political spectrum.  He was able to demonstrate to an often skeptical public that research and academia can make a difference in our troubled world.  And as I saw so many times, he did make a difference. Richard was a rare and exceptional person.  We’ll miss him dearly and remember him always.”

“I was very sad to hear about the passing of Richard Norton, who I knew for almost thirty years,” said Pardee School Lecturer Gregory Aftandilian. “Richard was a highly respected teacher, scholar, and political analyst on Middle East affairs, and his views and insights were highly sought after by government analysts and policymakers.  I would often see him at think tank events in Washington, D.C. where he gave erudite presentations; afterwards, he always took the time to chat with colleagues in his very friendly way.  I will be forever grateful to Richard for recommending me to teach some of his Middle East courses at BU in 2006-2007 when he was going on sabbatical, which led to my association as a lecturer with International Relations Department and the Pardee School.  He was one of a kind and will be sorely missed.”

“Richard Norton was the very first person I met when I interviewed for my job at BU. Even in the intimidating setting of a job interview with a formidable intellect, Richard came across as an extremely kind person,” said Pardee School Associate Professor of International Relations Manjari Chatterjee Miller. “After I was hired, Richard was assigned as my official mentor through the tenure track process. He was always an invaluable fount of information, and support. In no small part thanks to him, I learned how to navigate the often-frustrating and difficult path of being an assistant professor. I’m deeply grateful I got to know him as both, a colleague and guide.”

The Boston Consortium for Arab Region Studies (BCARS), for which Norton served as the founding Chairman of BCARS’ Executive Committee, published a remembrance on their website which can be read here.

Augustus Richard Norton will be dearly missed by his family, his students, his colleagues, and his friends around the world.