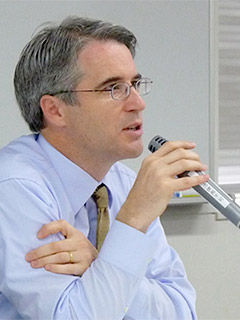 William W. Grimes is Associate Dean for Academic Affairs and Professor of International Relations at the Frederick S. Pardee School of Global Studies at Boston University, where he has taught since 1996. He previously served as chair of the Department of International Relations and as the first director of the BU Center for the Study of Asia.  He has also spent time as a post-doctoral researcher and as a visiting assistant professor at Harvard University.

Professor Grimes’ work bridges comparative and international political economy. His work on Japanese politics and political economy includes Unmaking the Japanese Miracle: Macroeconomic Politics, 1985-2000 (Cornell University Press, 2001) and his co-edited volume (with Ulrike Schaede) Japan’s Managed Globalization: Adapting to the 21st Century (M.E. Sharpe, 2002), as well as a variety of articles and book chapters on the impacts of financial globalization in Japan, Japanese monetary policy making, US-Japan relations, and related topics. He has also written extensively on East Asian regionalism, including his book Currency and Contest in East Asia: The Great Power Politics of Financial Regionalism(Cornell University Press, 2008), which was awarded the 2010 Masayoshi Ohira Prize for outstanding book on the Pacific Basin and received an Honorable Mention for the Asia Society’s Bernard Schwartz Book Award, as well as a series of scholarly and policy articles and chapters on this rapidly evolving issue. He also works on issues related to financial policy and financial innovation.

Professor Grimes has spent time as a visiting researcher at the Japanese Ministry of Finance, the Bank of Japan, and several universities in Japan and Australia. He has been the recipient of various fellowships and awards over the years, including two Fulbright fellowships and a book-writing grant from the Japan Foundation Center for Global Partnership. He is an active lecturer in Japan and the United States in both academic and policy venues and has been recognized for his teaching and advising at Boston University. Professor Grimes is committed to policy-relevant research and works regularly with government officials and financial professionals, particularly from the United States and Japan. He is a life member of the Council on Foreign Relations and has been a Research Associate of the National Asia Research Program.

Lukes and Grimes Awarded the 2020 Gitner Prize for Faculty Excellence

Pardee School Celebrates the Class of 2020