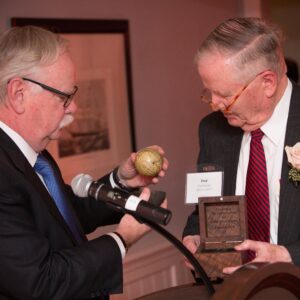 The Frederick S. Pardee School of Global Studies was born out of Boston University’s longstanding commitment to global issues, the legacy of excellence of the many academic units that now constitute the school, and the vision and generosity of the benefactor whose name it bears. The initial $25 million endowment from Fred Pardee and the University’s decision to launch the new school was announced in December 2013.

The following is an excerpt from a report of the announcement in BU Today (December 13, 2013):

Building on its growing international profile and the global scope of its programs for research and education, Boston University announced the launch of a new school of global studies in December 2013.

To be named for its largest benefactor, the Frederick S. Pardee School of Global Studies will be housed within the College of Arts & Sciences and will bring together faculty from across the University to support uniquely interdisciplinary research aimed at the great challenge of advancing global human progress and educating the next generation of leaders who will address these issues. Improving the human condition around the globe is at the core of the school’s mission.

Mr. Frederick S. Pardee (SMG’54, GSM’54, Hon.’06) donated $25 million to endow the school, matching the largest single gift in University history. This gift brings his lifetime giving to BU to almost $40 million, the most of any supporter…

The new school’s nascent mission statement declares its dedication ‘to advancing human progress and improving the human condition through rigorous and creative undergraduate, graduate, and professional education; pathbreaking research; and active engagement in innovative projects that apply this education and knowledge [to] the critical challenges humanity faces.’

Mr. Pardee made an additional $25 million endowment to the Pardee School in 2018. BU Today covered the second pledge in a November 2, 2018, news story. Excerpt below:

A former economist who runs a real estate management firm in Los Angeles, Pardee (Questrom’54, Hon.’06) has said his passion and determination to help build a more peaceful society was born when he was a child during World War II. He was able to attend BU on scholarship and has said the financial aid that provided him that opportunity—he earned a bachelor’s and a master’s degree at what was then the School of Management—became a driving force in his desire to better the world.

The latest gift from Pardee, which is meant to provide partial funding for a stand-alone building for the Pardee School, brings his total support to BU’s comprehensive fundraising campaign to $50 million, making him one of the University’s largest supporters.