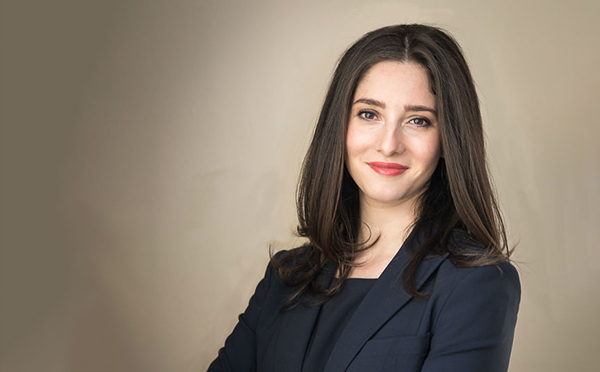 The SPH alum and healthcare policy analyst advises the Speaker on a range of healthcare issues, from substance use disorders to hospital financing.

“You can’t be engaged in the world without being engaged in the policy environment around you,” says School of Public Health alum Sarah Sabshon (SPH’15).

As the healthcare policy analyst for Massachusetts House Speaker Ronald Mariano, Sabshon engages with stakeholders every day to stay abreast of the critical state and federal-level health issues that impact residents in the Commonwealth.

In her role, Sabshon advises Speaker Mariano on a broad spectrum of healthcare issues, ranging from tobacco use and substance use disorders to hospital financing and long-term care. She also serves as the liaison to the legislature’s subject-matter committees, such as the Joint Committees on Public Health, Elder Affairs, Mental Health, Substance Use and Recovery, and Health Care Financing.

“I spend a lot of time reading, researching, learning, and meeting with stakeholders, as well as advising the Speaker on what our priority areas should be and how we should approach healthcare issues,” say Sabshon, who served in the same position for former House Speaker Robert DeLeo.

She says COVID-19 continues to be a priority, but as the Commonwealth and nation begin to emerge from the pandemic, the House is also placing a focus on issues that were unresolved before, or exacerbated by, the global health crisis—such as community hospital financing. Community hospitals play a vital role in treating many of Massachusetts’ most vulnerable populations, but are facing challenges such as lower reimbursement rates, staffing challenges, and increased competition from larger healthcare systems.

“Community hospitals have been hard-hit by COVID without many of the assets that larger academic medical centers have,” says Sabshon. “They play such an important role in our healthcare system and are economic drivers for the community, so we are thinking a lot about how we can make sure that these hospitals remain sustainable.”

Other pressing issues include pharmaceutical pricing, substance use disorders, and long-term care, as well as issues related to racial injustice and health inequities and disparities, Sabshon says.

“There has been discussion about disparities in healthcare for a long time, but not a lot of concrete action,” she says. “It’s unfortunate that it takes a tragedy like this pandemic to really bring some of these issues to the forefront, but it’s something that people are finally taking seriously and realizing that we can’t procrastinate on addressing it any longer.”

Creating these types of policy changes on a large scale is exactly what motivated Sabshon to pursue a public health degree. While studying health policy and management at SPH, she served as a legislative intern on the Joint Committee on Public Health, and was soon hired full-time as a research analyst for the committee and then as the chief of staff for former Massachusetts State Representative Jeffrey Sánchez, who has been a frequent guest speaker at SPH events and classes.

“In Representative Sánchez’s office, we always said that all of his best staffers were from BUSPH,” Sabshon says. “But that is a testament to the school’s relationship with the legislature, and with the community at large. Many research analysts who have worked for the Joint Committee on Public Health are also BUSPH alums, and have done excellent work.”

Amid a charged political climate, Sabshon says she is motivated by the desire to “make Massachusetts a better place to live and to be.

“What’s special about Massachusetts is that we are a model in a lot of ways for other states,” she says, adding that colleagues from other states often call to gauge how the Commonwealth has handled and solved various issues. “To go to work every day and feel like I’m pushing the needle and making a difference in the world of public health and healthcare is really exciting and fulfilling.”