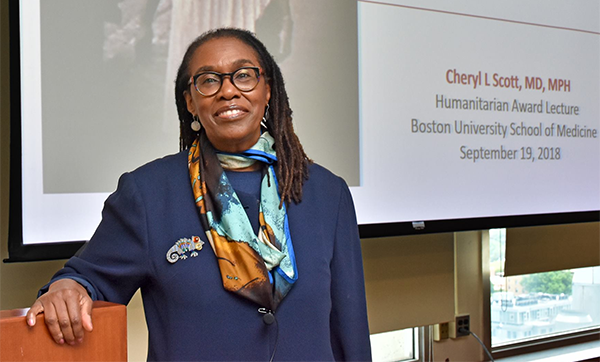 ‘My Energy Is Focused on Addressing Widening Inequalities’

SPH Dean’s Advisory Board Member Cheryl Scott is working to increase public acceptance and equitable distribution of the COVID-19 vaccine.

After nearly a 40-year career in preventive medicine, health systems strengthening, and domestic and international disaster work and relief, Cheryl Scott (MED’82) has brought a wealth of public health and clinical experience to the School of Public Health as a member of the Dean’s Advisory Board.

Scott is serving her second year on the 24-member board that helps Dean Sandro Galea and senior SPH leadership evaluate strategy and best practices, examine financial matters, and bolster philanthropic support of the school.

At this critical time in public health, “I’m very excited about the direction and energy that’s present at the School of Public Health,” says Scott. “I love the work and thought that is coming out of the school from good people who are making a difference—that gives me hope.”

Scott is passionate about health equity and system issues that affect marginalized populations. No stranger to the Boston University Medical Campus, Scott graduated from the School of Medicine in 1982 and completed residencies in internal and preventive medicine. She earned a Master of Public Health in International Health at Johns Hopkins University School of Hygiene and Public Health (now Johns Hopkins Bloomberg School of Public Health) in 1986. She received her medical degree amidst the HIV/AIDS epidemic and devoted her career to disease control and treatment, developing sustainable solutions to the social and economic barriers that impact health all over the world.

Scott brings significant medical experience to the board, including 20 years as a medical officer in the US Public Health Service Commissioned Corps (PHS) assigned to the Centers for Disease Control and Prevention (CDC). She currently serves as a medical consultant at the South Carolina Department of Health and Environmental Control in Columbia, SC.

Prior to the COVID-19 pandemic, Scott’s consulting centered on women’s health, family planning, and HIV/STD, with a goal to understand factors associated with maternal mortality, and address the state’s disproportionate rate of maternal mortality among Black women. Now, in addition to this work, much of her energy is dedicated to advancing COVID-19 vaccine education, acceptance, and allocation throughout the state. She serves on a vaccine advisory committee for the state and frequently speaks with local groups and organizations to quell vaccine hesitancy and encourage immunization among South Carolinians—particularly Black people and residents in rural communities, who are disproportionately affected by the virus.

She has held HIV focus groups members of the South Carolina HIV Planning Council, as well as Zoom meetings talking with seniors in the state’s Democratic party, who expressed concerns about the slowness of the vaccine rollout in their communities.

“What I’ve experienced here is an exchange,” says Scott. “I’m really learning so much about people and their lives, and also how informed communities are” about the history of medical racism in medicine and consequential figures such as J. Marion Sims, the South Carolina-born physician known as the “Father of Modern Gynecology”, who performed medical experiments without anesthesia on enslaved Black women.

The vaccine challenges in the US, from public reluctance to inequitable distribution in certain areas, “have really uncovered how discrimination is still baked into our processes,” Scott says.

Scott is also working with the health department on establishing predictive syndromic surveillance for COVID-19. She is a state co-investigator with the University of South Carolina’s NIH Big Data Health Center that examines COVID-19 transmission and associated community impact.

She has also been vocal about the history of redlining and the public health impact of discriminatory housing practices in the US. She recently spoke about residential segregation and racial inequities in housing during a Columbia City Councilwoman’s “Color of Law” panel, named after the award-winning book by Richard Rothstein that delves into government-imposed residential segregation. The panel discussed issues around residential zoning, education, finance and banking, adverse childhood experiences, and health inequities.

Scott has been devoted to reducing inequities since the beginning of her clinical and public health career. After completing projects in Cote d’Ivoire, India, Kenya, and the Caribbean, where she studied uterine rupture, pancreatic cancer and delayed puberty among malnourished schoolgirls in these settings, she decided to pursue her MPH and gain experience  in applied epidemiology. Scott joined the CDC and PHS in 1993 and served as an epidemic intelligence service officer in the Maternal and Child Health Division of the California Department of Health Services. She has had multiple assignments and held several senior public health roles in the US, Caribbean, Latin America and several African countries.

From 2000-2005, Scott was seconded to the US Department of State and served as the inaugural CDC Director in Tanzania, where she established a CDC office and a $34 million HIV/AIDS program for prevention, care, and treatment, which laid a cornerstone for the rapid scale-up of national services on Tanzania’s mainland and islands of Zanzibar. Scott’s collaboration with the Tanzanian government and its multiple partners played a critical role in the implementation of the country’s first no-cost national antiretroviral therapy program.

Scott returned to the US to work for the next five years with the California Department of Public Health Multidrug-Resistant Tuberculosis Service. She retired from the PHS at the rank of captain in 2010, and served for five more years on the Pacific and Southwest Regional Health Equity Council, which established a system to leverage resources into equitable public health policies and practice within the region.

As an African American woman, Scott says she experienced several challenges throughout her career, working in an industry staffed and led primarily by white men.

“There were very few women of color at the CDC when I joined,” says Scott, adding that it was important to share her perspective as an African American woman, to inform the CDC’s understanding of and recommendations for racial health equity. She praises the vision and tenacity of her CDC colleagues, whom she joined in pushing for the agency to “recognize racism as a social determinant of public health”—especially at a time when epidemiologic data was invariably highlighting its impact on health outcomes. Working directly with communities on strategies toward health equity, Scott has learned the importance of community context and the power of local community input and participation.

Looking back on her work, Scott says her career of service has been “a tremendous gift.

“My career in public health is filled with growth,” she says. “Now my energy is focused on reinforcing the progress that has been made over the past several decades and addressing widening inequalities.”