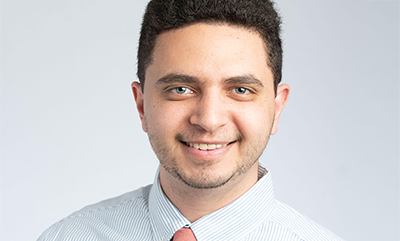 Rafik Wahbi, an MPH candidate who is working tirelessly to advance true justice in the US carceral system and address racial and ethnic inequities in health, has been named the student speaker at the 2020 the School of Public Health Convocation. Wahbi will speak during a Virtual SPH Celebration on Friday, May 15 from 4 p.m.-5 p.m. on Zoom.

Born in Cairo, Egypt and raised in California, Wahbi is passionate about developing solutions to public health issues that impact the health of communities of color. He started his higher education at Pasadena Community College and arrived to SPH with a BS in neurobiology and physiology, along with public health experience conducting epidemiologic research on substance use at the Los Angeles Department of Public Health. He had also worked in research and health education with an NGO that served a marginalized Muslim community in the southern Philippines.

As he completed the Community Assessment, Program Design, Implementation, and Evaluation certificate at SPH, Wahbi continued to pursue his research interests in substance use disorders, with interventions geared toward marginalized populations. Soon after he began the MPH program in September 2018, Wahbi became a research assistant in the Clinical Addiction Research and Education unit at Boston Medical Center, where he conducted preliminary analyses for Project RECOVER, an Office of Minority Health-funded study that aims to understand the role of peer recovery coaches on black and Latinx individuals receiving treatment for substance use. Soon after, he became the program coordinator of the project.

For his practicum, Rafik spent summer 2019 with Health Resources in Action (HRIA), a Boston-based public health organization. At HRIA, he worked on the Massachusetts Community Health Fund, in collaboration with the Department of Public Health. The fund was designed to address institutional and structural barriers to health including racism, poverty and power imbalances. After finishing his practicum, he was invited by HRIA and DPH to be a part of the fund review committee to help decide which projects would get funded.

Last summer, Wahbi also designed and taught a hip-hop writing course to incarcerated individuals receiving treatment for substance use disorder at the Suffolk County House of Correction. Funded by an Activist Bucks grant from the SPH Activist Lab, Wahbi says the eight-week project was a way “to advocate for those in our carceral system” and “help the participants process their substance use and incarceration.” The classes were so well received that Wahbi recruited seven fellow SPH students to join an expanded version of the project at the House of Correction. Now called the Prison Art and Advocacy Project, the project will offer two hip-hop classes, one facilitated by local Boston artists, as well other art and mental health-related programming.

Wahbi joined the Students of Color for Public Health student organization in his first semester at SPH, and soon joined the group’s executive board, first as the events coordinator and then as the president. He also served as a teaching assistant for the Quantitative Methods for Public Health and Qualitative Research Methods courses. He has presented his research on substance use disorder, as well as the Activist Bucks project, at local and national conferences.

“I think I have successfully lived out the school’s mission of ‘Think. Teach. Do.,” says Wahbi, adding that it was important to him to help SPH “continue to be a place for students to thrive.”

In one nomination letter, MPH candidate Tierra Holmes (SPH’20), wrote that Wahbi “applies a health equity lens to promote social justice for people of color.” In another nomination letter, MPH candidate Leah Stansky (SPH’20) wrote that Wahbi “is a true leader of our community who perfectly embraces SPH’s core values and mission.”