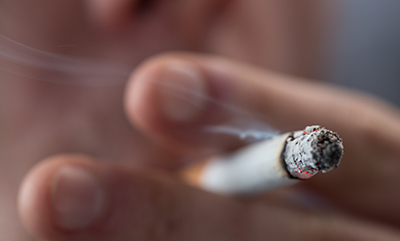 Past studies have shown that as many as three-quarters of adults with substance use disorders (SUDs) also have a history of cigarette smoking.

Now, a new study by a team that includes a School of Public Health researcher has found that continuing or initiating cigarette use after stopping the use of illicit drugs is associated with an increased likelihood of substance use relapse.

The study, in the Journal of Clinical Psychiatry, examined the association between cigarette smoking and relapse rates among adults who had stopped illicit substance use. The researchers studied data from 34,653 adults enrolled in the National Epidemiologic Survey on Alcohol and Related Conditions (NESARC) who were assessed at two time points, three years apart, on substance use, substance use disorders, and related physical and mental disorders.

Daily smokers and nondaily smokers had about twice the odds of relapsing to drug use at the end of the three-year period compared to nonsmokers. Those odds held even after controlling for demographics and other factors, including mood, anxiety, alcohol use disorders, and nicotine dependence.

“To our knowledge, no prior study has shown that cigarette smoking—both continued smoking and new-onset smoking—is associated with an increase in the likelihood of relapse to SUD among adults with past SUDs,” the authors said.

They suggested that if further research confirms a relationship between smoking and relapse, then substance-use treatment programs should consider incorporating smoking prevention efforts into their services. Only a minority of treatment centers report that they have formal smoking-cessation programs, they said.

The study cites several possible reasons why smoking may increase the likelihood of relapse, including that cigarettes may become a “cue” for use of illicit drugs, and that nicotine may cause increased cravings for stimulants and opiates. The authors said that while there have been some concerns that quitting smoking makes it more difficult to quit or stay off illicit drugs, cigarette abstinence “does not appear to lead to a compensatory increase in other drug use, and may even improve drug abstinence.”

The authors noted that cigarette smoking is just one of many potential factors associated with SUD relapse, and that more data are needed to determine the clinical significance of the association. But they said, “The treatment of SUDs is extremely challenging, and even if not smoking is just modestly associated with improvements in sustained abstinence, this association may be useful in treatment programs.”

Sandro Galea, dean and Robert A. Knox Professor, was a co-author on the study. It was led by researchers from Columbia University’s Mailman School of Public Health and the City University of New York.

Cigarette Smoking Linked to Increased Risk of Substance Use Relapse