Social Welfare and the Utility of Promoting Health

Before today’s Note, a comment on the violence that has characterized this week. I was moved reading a New York Times editorial, “When Will the Killing Stop?,” which argued that the ongoing, seemingly endless, racially charged violence—manifesting this week as the deaths of Alton Sterling and Philando Castile—is a consequence of decades of disinvestment in efforts to build a healthier world. This was then resoundingly reinforced by the killing of 5 police officers in Dallas, an event that President Obama has correctly described as “despicable.” I am unfortunately not sanguine about the violence stopping, absent a real societal shift towards an investment in social justice that can create the foundations for a healthier, less violent world.

Changing tone, and moving on to today’s note. It is relatively canonical in public health that our goals to improve the health of populations are best served if we adopt multi-sectoral and interdisciplinary approaches. This emerges both in our school’s value statement and through our recent strategic thinking initiative. Although I have not written much on the topic, it strikes me that we have much to learn from the field of economics. Although economics has historically stood apart from the mainstream of population health science, we have leading economists among us, and the perspective of economics—particularly its focus on resource allocation, models of human behavior and interaction, and the population-level consequences of policies and other exposures—are closely linked to the core aspirations of public health. I would like to use this Note to explore an area of further confluence: the promotion of social welfare.

To begin, it is important that we differentiate what “welfare” means in the economic sense from its other connotation of government assistance for the poor. In economic terms, social welfare refers to the aggregated measure of a society’s wellbeing and happiness. “Welfare economics” is the subset of economics that concerns itself with the allocation of goods, resources, and services, with an eye toward optimizing this allocation to promote general prosperity and satisfaction. At the heart of this approach is the concept of utility. Utility can be broadly defined as the satisfaction a person derives from the consumption of goods, or from being the beneficiary of services. Jeremy Bentham, who originated this thinking, described utility as “that property in any object, whereby it tends to produce benefit, advantage, pleasure, good, or happiness…or…to prevent the happening of mischief, pain, evil, or unhappiness.” The concept of utility extends beyond preferences for goods and services directly sold in the market: people may derive utility from having children, from residing in socially cohesive communities with good weather, from living without pain or activity limitations, etc.

A social welfare approach then provides us with a lens through which we can view several fundamental questions of interest to populations: how do we value, or weigh, the welfare of different groups of people in order to maximize welfare across all groups, given the constraints of scarce resources and political intransigence? Whose utility matters in society and whose utility should policy interventions seek to increase? Given these questions, it seems to me that such an approach has two central utilities for our thinking in population health.

First, a social welfare approach can help us formalize our thinking about our aims in population health, and the values that underpin these aims. Consider the vexing problem of income inequality in the United States. This issue is clearly of central import to public health, given the inextricable link between income and health. A social welfare view forces us to ask the question: how might a utility-focused approach be applied to maximize general prosperity? Should we seek to improve social welfare by raising taxes on the rich and redistributing through social programs? Or would a smarter strategy be to promote economic efficiency, by streamlining our tax code, or even redistributing income directly via a negative income tax? Or would social welfare be better maximized through increased regulation of wages and improved bargaining power of workers?

Different types of social welfare functions—different value sets—illustrate these choices differently. Figure 1 below uses indifference curves to illustrate the implications of different welfare functions; each point on the curve represents an equal amount of welfare for both individuals; welfare increases in the direction of the arrows, away from the origin. Two approaches are shown. One approach adopts a Rawlsian function, which measures a society by the utility of its worst-off members. Implied by this approach, resources would be reallocated from the best-off to the worst-off members of society until equal utility was reached. Another approach embraces a utilitarian view which averages the utility of all individuals and focuses only on increasing aggregate utility for all, without any attention to distribution. Under such a welfare function, very unequal distributions of utility may be optimal if total utility is greater than more equitable distributions. (It is worth noting that because there is decreasing marginal utility to wealth – a dollar is worth more for an impoverished person than for a rich person – even the utilitarian social welfare function places implicit value on equitable resource distribution.) Figure 1 illustrates these two functions, and a generalized mix of the two, in a simple two-person society.

In public health, we, too, concern ourselves with the measurement and maximization of utility, even if we think about these topics less. Take, for example, the occasionally controversial practice of cost-utility analysis. This approach attempts to quantify the value of a particular treatment or program, to determine its overall effect on individuals or societies. In this analysis, utility refers to general quality of life. By this metric, a person’s quality of life is measured according to a utility value scale, where the value of an intervention is determined by its translation into quality-adjusted life years (QALYs, Figure 2 below). Utility is also linked to health in other ways. Longer life expectancy means a longer future utility stream; less pain has a direct utility effect; and activity limitations caused by disability or disease shape utility gained from other parts of life. Economics has increasingly recognized the centrality of health and longevity to utility, and this has led to a greater focus on health in the economics literature. 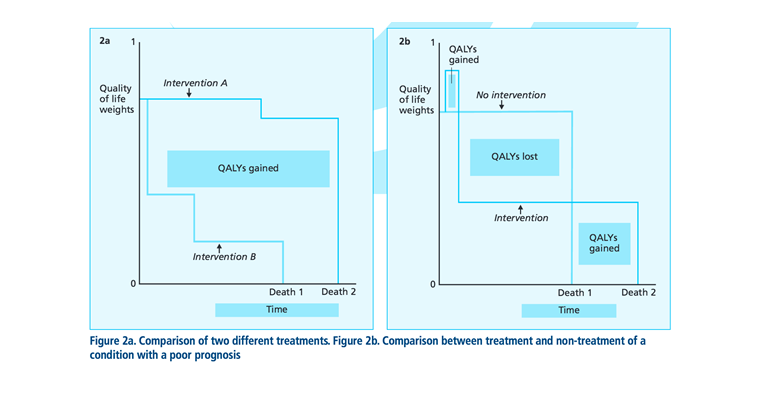 What is a QALY? “What is…? series.” Philip, C., Thompson, G. Hayward Medical Communications. http://www.bandolier.org.uk/painres/download/whatis/QALY.pdf Accessed May 15, 2016.

The second way a social welfare approach can be useful to our efforts is that it forces us to contend with the very “outcome” we wish to maximize, the definition of “health,” and how health states “rank” compared to others, forcing us to ask which we may prefer if our goal is health maximization. It is all well and good to see our task as improving the health of populations, but we recognize at core that the very concept of health is broad, and in many ways subjective. In this sense, we share the dilemma of the economist, as she seeks to define “utility” and use her understanding to implement systems that will improve society on a large scale. Grappling with these questions—what is utility? what is health? how do we accurately measure each?—obliges us to view quality of life as a spectrum, rather than a binary question of “sick or not sick” or “poor or not poor.” Income and disease are, of course, key components that contribute to our overall wellbeing, but they are far from the whole story, as we well know. We must also take into account the fact that policies affecting health often have consequences that extend beyond the immediate concern of promoting health-welfare. Quarantine, for example, has implications for individual liberty; cigarette taxes place an economic burden on those who do not quit; raising taxes to fund the Affordable Care Act is not free, etc. We ought to take all of this into consideration, not only as health professionals, but as citizens aspiring to behave responsibly.

In our efforts to improve conditions on the level of populations, we must assess the overall wellbeing of thousands, sometimes millions of people, while remaining mindful of the range of factors that go into shaping health indicators. What are the health indicators that matter? How can we tell when a policy intervention has succeeded? Welfare analysis sheds new light on a particular debate: do we judge progress by the aggregate improvement in health outcomes, or by the degree to which these improvements are equally distributed within and across populations? Whose health do we value? Committed as we are to the narrowing of health gaps, we see in the choice of social welfare function a reflection of our own engagement with the question of how to best measure the wellbeing of populations. As a school of public health, we have an opportunity (obligation?) to engage in this deliberation on our campus, with the populations with which we work, and in society at large.

I have argued before that in public health we ought to be firmly on the side of minimizing disparities, and ensuring that no one gets left behind as we move collectively in the direction of greater health for all. Doing so requires analysis, advocacy, and a willingness to engage with a range of approaches that can advance our ideas. The language of social welfare may have particular utility then for the ends of public health. There has been much discussion, primarily in health economic journals, about the applications and challenges of a social welfare approach through the lenses of mortality risk reduction, individual responsibility, health inequality and smoking cessation. With these issues in play, it is not difficult to see how a social welfare approach might also be applied to policy discussions about other complicated health-related subjects like gun control, air pollution, abortion, or healthy eating. Such an approach calls for clarity of language and thought, as we continue to marshal our data and refine our arguments towards the end of getting to healthier populations.

Acknowledgement: I am grateful to Laura Sampson, Professor Jacob Bor, and to Eric DelGizzo, for their contributions to this Dean’s Note