Public health has long been concerned with issues of inter-group health inequalities. A focus on the health of vulnerable groups within populations is a core remit of public health. This is well articulated in the mission of our School of Public Health: “To improve the health of local, national, and international populations, particularly the disadvantaged, underserved, and vulnerable, through excellence and innovation in education, research, and service.” Similar sentiments are echoed in the missions of other schools of public health worldwide. It is then not surprising to note that there is a substantial body of scholarship and research focused around health differences between populations, often characterized as health inequalities or health disparities research. Indeed, the body of work concerned with health disparities and health inequalities has been growing over the past 15 years, even as a proportion of total number of papers published annually has roughly plateaued over the past 5 years. [See Figures 1 and 2 below.] 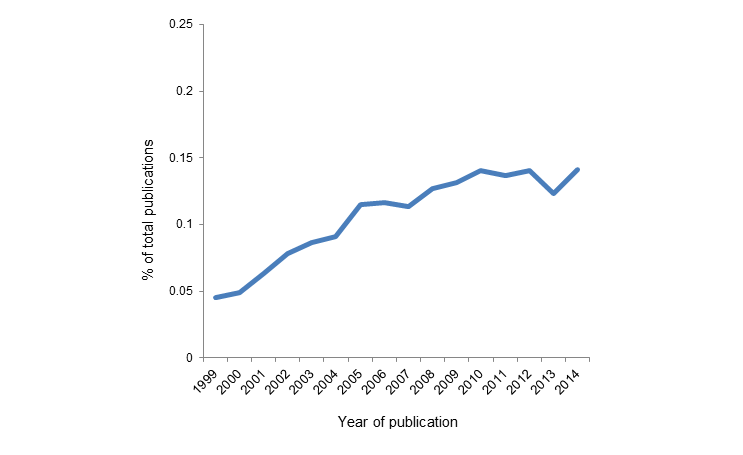 Not insubstantial federal resources have also been committed, and continue to be committed, to research in the area. The National Institutes of Health spent $2.7 billion on “health disparities” research in the 2014 fiscal year, roughly comparable to what it had spent in several preceding years. While this amount is dwarfed by research on, for example genetics ($7.3 billion), it still represents a real investment to try to study health inequalities. On the public health practice side, several efforts nationwide have been explicitly focused on narrowing health disparities, including the HHS Action Plan to Reduce Racial and Ethnic Health Disparities and the National Stakeholder Strategy for Achieving Health Equity, both through the US Department of Health and Human Services. The Minority Health and Health Disparities Research and Education Act was passed in 2000, which established the National Institute on Minority Health and Health Disparities (full disclosure: I have the privilege of serving on the Council for NIMHD). The second goal of Healthy People 2020 is to “achieve health equity and eliminate disparities.” Some statewide efforts have also been quite visible targeting health inequalities, including The California Campaign to Eliminate Racial and Ethnic Disparities in Health, co-chaired by the American Public Health Association and the Prevention Institute. The Health Center program, which was originally funded by the Health Resources and Services Administration and recently received $11 billion from the Affordable Care Act, supports community health centers which try to overcome geographic, language, and cultural barriers to care for low-income individuals and minorities. Even the Affordable Care Act itself is largely aimed at reducing health disparities by expanding insurance coverage.

It is reasonable, therefore, to ask: How are we doing on health inequalities? To what extent are we succeeding in narrowing health disparities between groups within the United States? I restrict my comments here to the US to narrow the scope of the conversation, although much of this could well be extended to other countries.

On some levels, particularly process indicators, we are indeed doing well.

One dimension that seems to be narrowing in disparities, at least among racial groups, is access to preventive care. Figure 3 below shows data from a CDC report that compares the proportion of children vaccinated for measles, mumps, and rubella. We can see a narrowing of the gap between white children and Hispanic and black children over time. 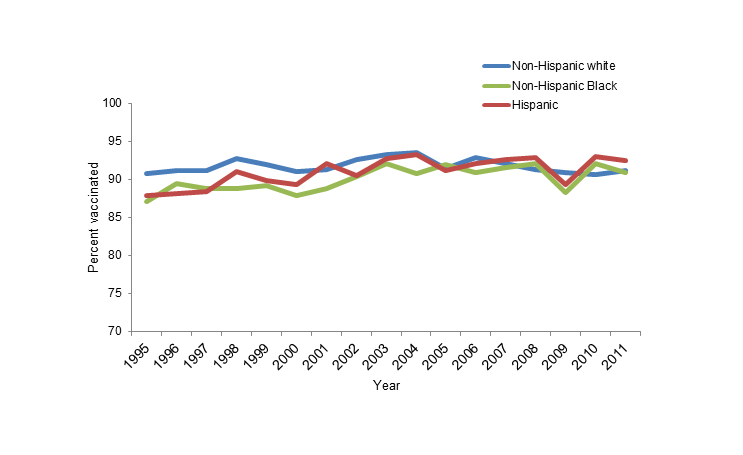 Another way of measuring preventive care is by looking at the proportion of adults who report having no usual source of health care, which has also narrowed over time across racial groups. 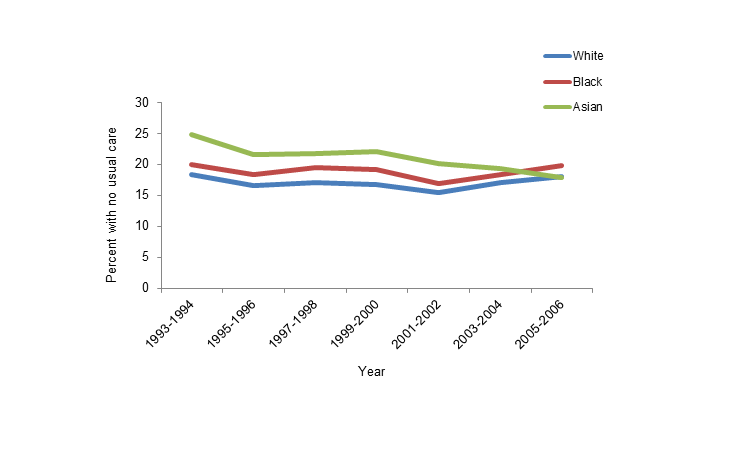 Created from Table 78 of Health, United States, 2007 with Chartbook on Trends in the Health of Americans. US Department of Health and Human Services, Centers for Disease Control and Prevention, National Center for Health Statistics. November 2007. Available at: http://www.cdc.gov/nchs/data/hus/hus07.pdf. Accessed March 19, 2015.
Figure 4. Percent of adults age 18–64 with no usual source of health care, 1993–2006.

Another good piece of news is that general public awareness of health disparities has improved. In a 1999 national survey, 55 percent of American adults said that they knew blacks and Latinos had poorer health outcomes than whites. In 2010, that number has increased to 59 percent. Although only a modest increase, and not as high as one might hope, it is perhaps heartening to know that as more policies and programs launch to try to narrow the gap, our general public is starting to understand, or at least recognize, disparities.

But, how are we doing on health indicators?

The final report for Healthy People 2010 reported on health disparities for 469 population-based health objectives, showing that although there was some improvement, disparities have either increased or stayed the same since baseline measures for the majority of objectives, particularly between racial and ethnic groups [see Figure 5]. 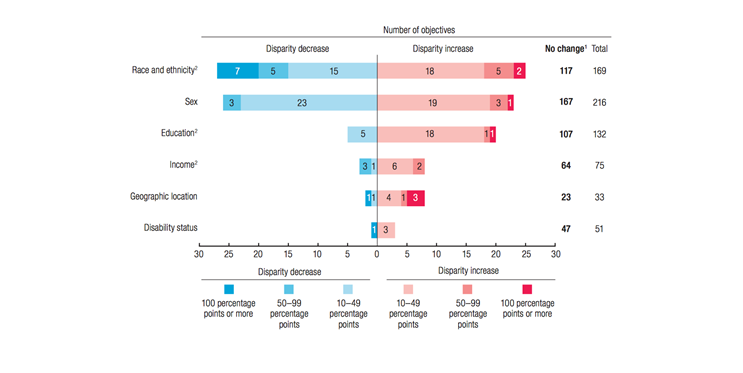 One of the most basic measures of health disparities is life expectancy. From 2003 to 2013, we saw an increase in life expectancy for all race/gender groups [see Figure 6, below], and the gap between the white and black groups decreased slightly across years. However, there is still an astonishing 4.7-year difference among men and a 3.1-year difference among women between non-Hispanic white and black groups. 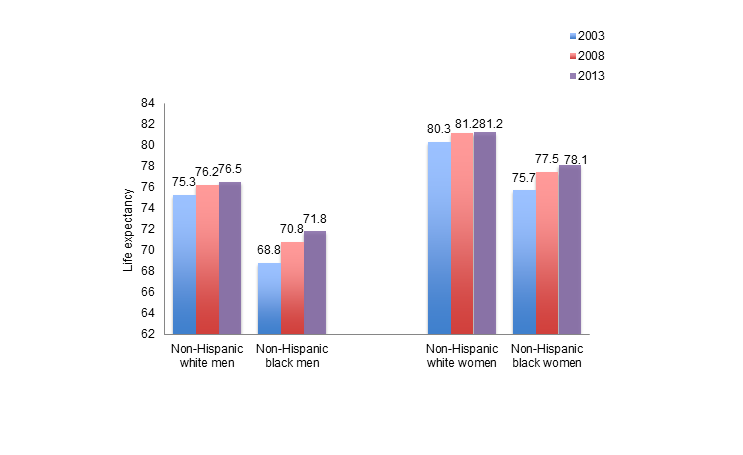 Narrowing in on the top five causes of death in the US in 2010, we see that blacks have an elevated rate of all types of death compared to whites, with the exception of chronic lower respiratory diseases and accidents [see Figure 7].

Disparities persist across a board range of health indicators, visible not just by comparing death rates but also prevalence over time. This is clear with obesity, one of the most common chronic conditions in the US. Figure 8 below shows the prevalence of obesity among black and white women from 1976 to 2004. Black women have a higher level of obesity at every time point, and the gap remains wide throughout time, even increasing for the period of 2001 to 2004. 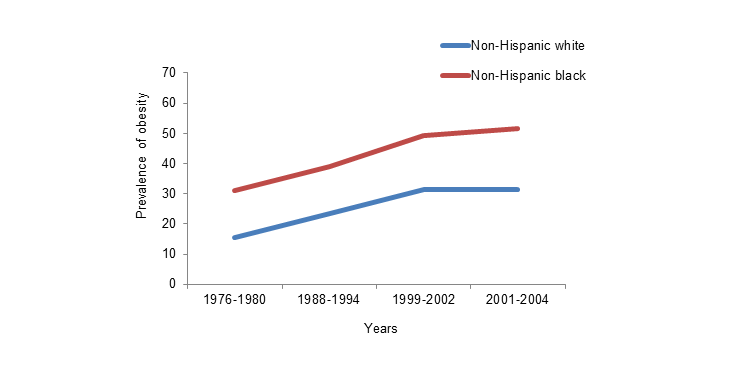 Created from table 74 of Health, United States, 2007 with chartbook on trends in the health of Americans. US Department of Health and Human Services, Centers for Disease Control and Prevention, National Center for Health Statistics. November 2007. Available at: http://www.cdc.gov/nchs/data/hus/hus07.pdf. Accessed March 19, 2015.
Figure 8. Age-adjusted prevalence of obesity among females age 20–74, 1976–2004.

Diabetes, another increasingly prevalent chronic condition in the United States, highlights racial and ethnic disparities as well. As can be seen in Figure 9, Hispanics, non-Hispanic blacks, and American Indians/Alaska Natives saw the highest proportions of adults with diagnosed diabetes from 2010 to 2012, with the prevalence among American Indians/Alaskan Natives at more than double that of non-Hispanic whites. 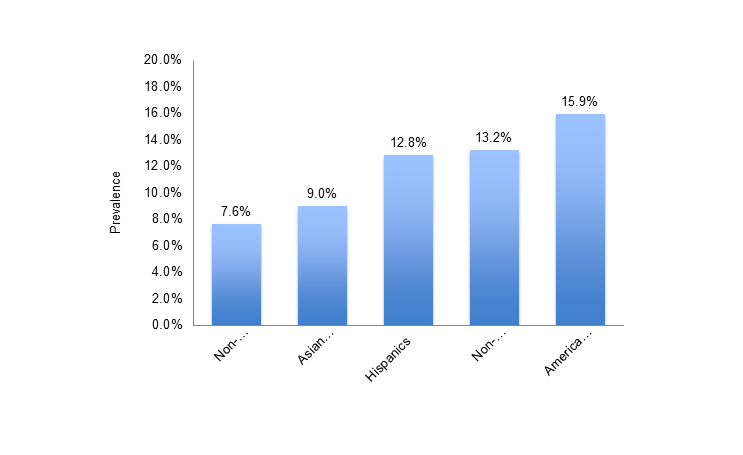 Centers for Disease Control and Prevention. National diabetes statistics report: Estimates of diabetes and its burden in the United States, 2014. Atlanta, GA: US Department of Health and Human Services; 2014. Available at: http://www.cdc.gov/diabetes/data/statistics/2014statisticsreport.html.
Figure 9. Age-adjusted prevalence of diagnosed diabetes among people 20 years old or older by race/ethnicity, 2010–2012.

Another example can be found in HIV and AIDS. The prevalence of HIV is greater among blacks than that among all other racial/ethnic groups, and black men have a higher proportion of HIV infections at all stages of the disease. Figure 10 shows estimated rates of HIV infection using the CDC’s national HIV surveillance system, and one can see that blacks have the highest rate and largest relative difference between groups in both 2005 and 2008. 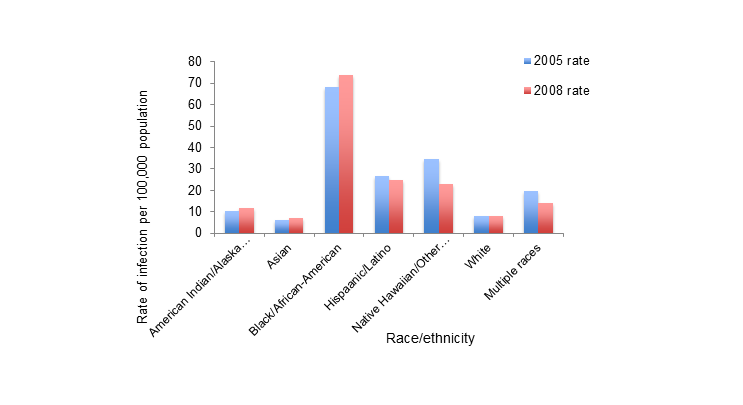 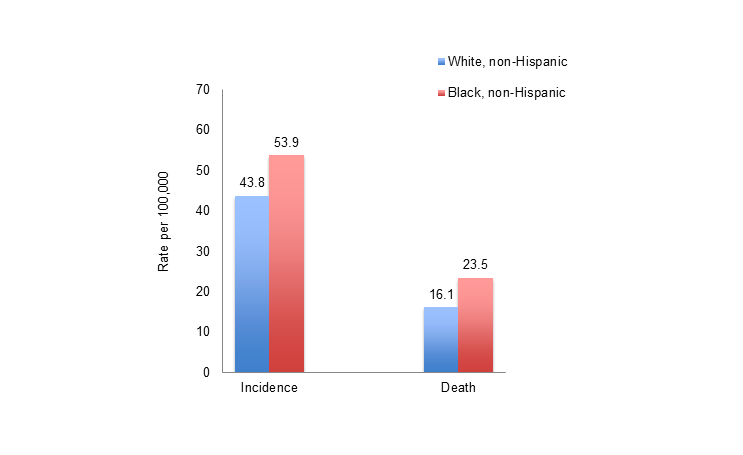 Why do we have these persisting health inequalities despite substantial intellectual engagement with the issue, research spending in the area, and narrowing of access to care gaps?

Much of the literature in this area continues to focus on a few key areas that challenge our efforts at ensuring access to health care. There is ample evidence that there remains inadequate access to care for minority groups and that limited access to care may be associated with poorer health indicators among these groups. Lower health literacy among minority groups has similarly been documented and is associated with more limited, and poorer, access to care. Minority groups are much more distrustful of health systems and, as a result, to have limited access to high-quality care. This has been shown for a broad range of health disorders, including, for example, in antiretroviral therapy adherence among a national sample of HIV infected patients. Conversely, healthcare provider implicit prejudice or bias both reinforces mistrust and further introduces barriers to receipt of care. Barriers to care access extend well beyond racial/ethnic minority status, and may be particularly pronounced when linked to factors such as English proficiency. As shown in Figure 12, a primary language other than English spoken at home has been associated with at least a two-fold increase risk of being uninsured. 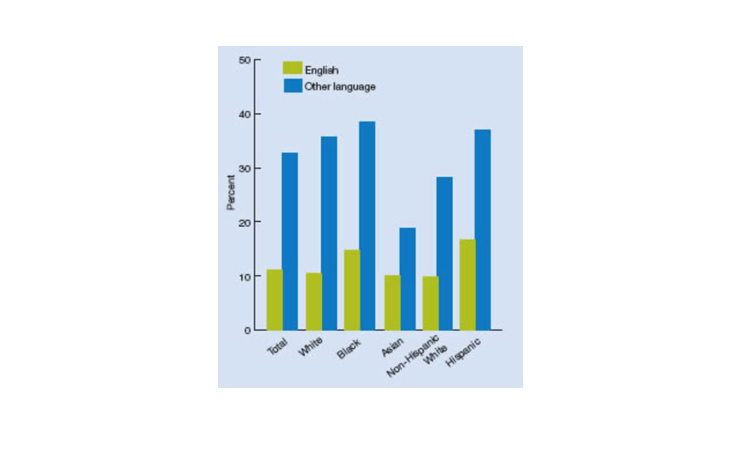 Disparities in Health Care Quality Among Racial and Ethnic Minority Groups: Findings From the National Healthcare Quality and Disparities Reports, 2008. Agency for Healthcare Research and Quality. Available at: http://archive.ahrq.gov/research/findings/nhqrdr/nhqrdr08/minority.html.
Figure 12. Adults under age 65 who were uninsured all year in 2005, by race, ethnicity, and language spoken at home.

At core, however, a more fundamental lens on the persistence of health inequalities is inescapably linked to deep and persistent economic inequalities between groups in the US.

US adults living at or below the federal poverty level are more than five times more likely to say they are in poor or fair health. The impact of economic disparities on health inequalities is pervasive, extending, for example, not only to differences between racial groups, but also to differences within racial groups. For example, black women are much more likely to have a sexually transmitted infection if they also had a lower education status, as shown in Figure 13 below. 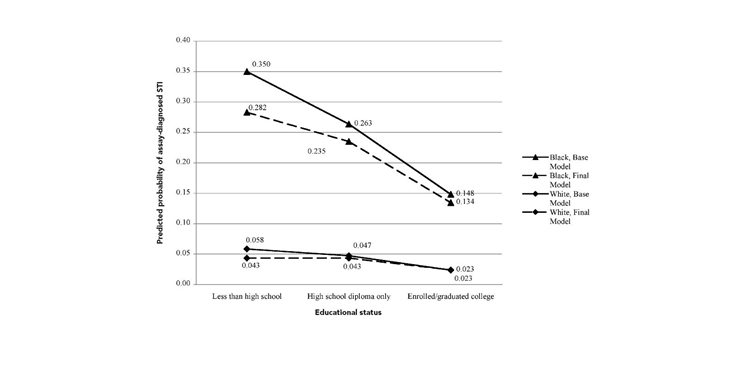 Annang L et al. Does education matter? Examining racial differences in the association between education and STI diagnosis among black and white young adult females in the US. Public Health Rep. 2010. Available at: http://www.ncbi.nlm.nih.gov/pmc/articles/PMC2882981/.
Figure 13. Probability of sexually transmitted infection by education.

Economic and social inequalities extend far beyond the “simple” remit of income as a means to acquire salutary resources and include the manifold, subtle, and pervasive challenges embedded in the wildly divergent geographic circumstances that characterize living conditions for different groups across the country. At the simplest level, low-income neighborhoods have more fast-food outlets, have fewer grocery stores and recreational facilities, and are in closer proximity to sources of industrial pollution compared with white neighborhoods. At an even more complicated level, persistent interpersonal discrimination and structural marginalization of entire racial groups—perhaps brought most cruelly and nakedly to light in recent police shootings of unarmed black men—likely structure our entire range of social, economic, and health interactions. This creates a near-insurmountable barrier to health equality that will require an honest and unstinting focus on the conditions that make us healthy, if we are to appropriately promote the health of all populations, and narrow inequalities in health between groups in the US. Can we achieve inter-group health gap narrowing without tackling foundational drivers of health? There is substantial theoretical and empiric argument to be made that we cannot. If not, what are the implications for our scholarship, and for an academic school of public health that is, as it should be, deeply concerned with working towards improving health for all, and that aims to innovate in scholarship, education, and practice towards that goal?

Acknowledgement. I would like to acknowledge the help of Laura Sampson with this Dean’s Note.