As a school of public health it is our mission to improve the health of populations. We do so through generating new knowledge and through advancing a public health conversation towards creating the conditions that make people healthy. We also do so through teaching—educating a generation of students who will be the actors who aspire to improve population health in the years to come. This, then, gives us a particular responsibility to consider the role of education in everything we do, including in the generation of population health.

How does education relate to health? In almost every way imaginable. Study after study has shown that the higher our education level, the longer we will potentially live and the healthier those years are likely to be. College graduates live at least five years longer than those who do not graduate high school. Those four years of higher education can also lead to a range of health benefits, including a lower risk of diabetes, heart disease, and obesity. The health effects of education are also intergenerational—the infant mortality rate per 1,000 live births for mothers who did not graduate from high school is close to double that of women who earned college degrees. Figure 1 illustrates how years of educational attainment can shape an individual’s vulnerability to a wide variety of health risks. 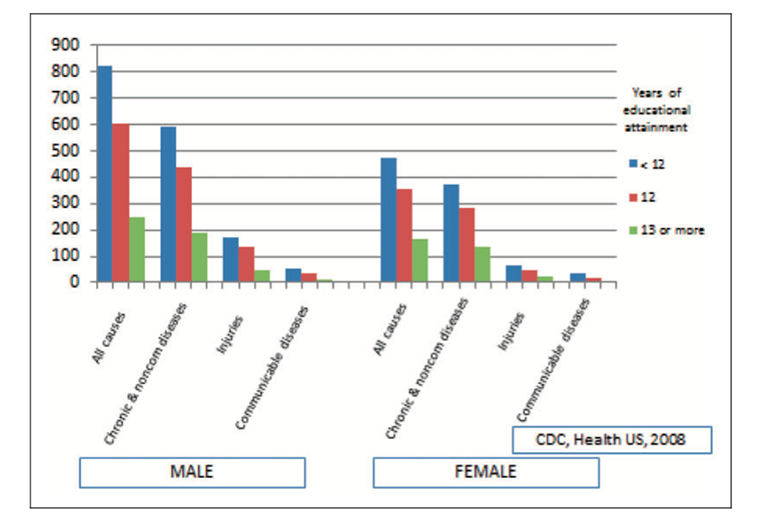 Even if a young person does manage to stay in school, poor academic performance can have health implications regardless of whether that student graduates or not. When high school students have lower grades, they are, for example, less likely to exercise and moderate their television viewing, and more likely to engage in unsafe behaviors like carrying a weapon (Figure 2). 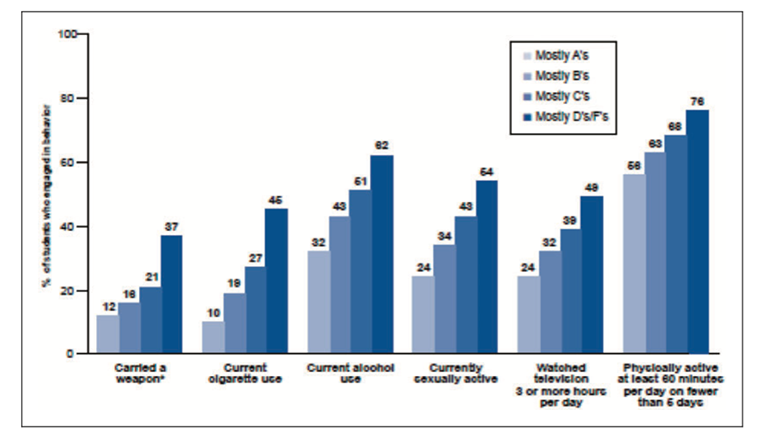 There are several mechanisms that explain why the amount of education a person receives is such an important determinant of well-being. Take, for example, why better grades seem to lead to better life choices. Robert Hahn and Benedict Truman speculate that several influences could be at play, including the possibility that students who avoid risky behavior perform better as a result of their choices, as such hazardous activities could impede academic improvement. Hahn and Truman also suggest the influence of “other factors, such as strong values, [which] promote both academic achievement and self-protective behaviors.”

The health benefits of education are compounded by the health benefits of income, with the two being highly correlated. More education means greater access to economic resources; people with a college degree can expect to earn nearly $1 million more over the course of a lifetime than those without one, and people with graduate degrees can expect to see an even greater increase in earnings. Figure 3 reflects this advantage on the level of weekly income and unemployment rates. The relation between higher income and health is, in turn, probably one of the best established relations in population health. 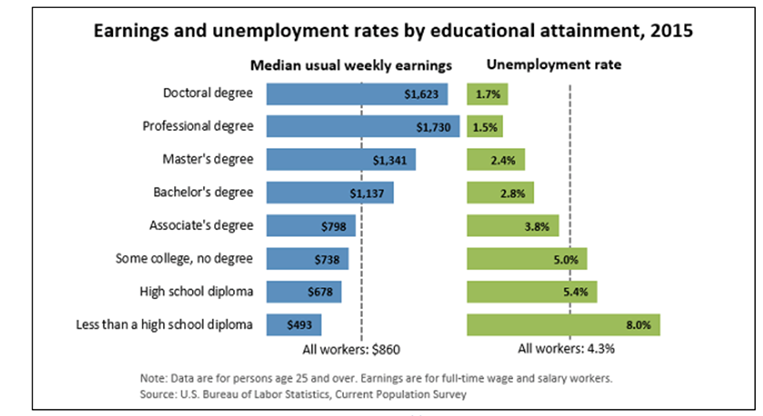 With so much at stake, it is encouraging to be able to report that the state of education in the United States, troubled for so long, is actually improving. Slowly. The US graduation rate recently hit 82 percent, an all-time high, and American students are performing better in math and science, though they remain in the middle of the pack internationally. The problem is that these positive outcomes are not being shared by everyone. The achievement gap between racial groups, particularly between white and black students, remains wide. This is reflected in recent ACT scores, where black students performed at a significantly lower level than many of their peers, often failing to earn minimum, benchmark scores (Figure 4). 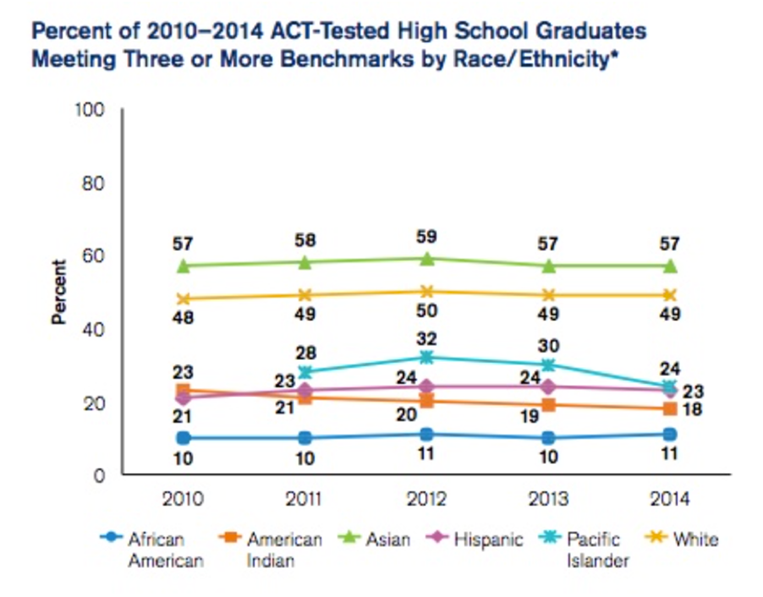 The achievement gap is further illustrated in everything from high school dropout rates—with 16 percent of black students dropping out, compared with 8 percent of white students—to the racial divide in college enrollment. In 2014, 56 percent of black students enrolled, while the number for whites was 66 percent. When black students do enroll in college, they are less likely to graduate than their white peers. There are several ways to account for these troubling disparities. The first is economic. Data have shown a correlation between racial achievement gaps and the racial socioeconomic divide; gaps between white and black students tend to be wider in wealthier communities. A new analysis found that sixth graders in wealthier school districts are four grade levels above children in poorer districts. There are also social reasons for these gaps. Black children are more likely to have difficult childhoods; the attendant challenges are compounded by the fact that the mothers and fathers of these children are less likely than white parents to have degrees themselves (Figure 5). 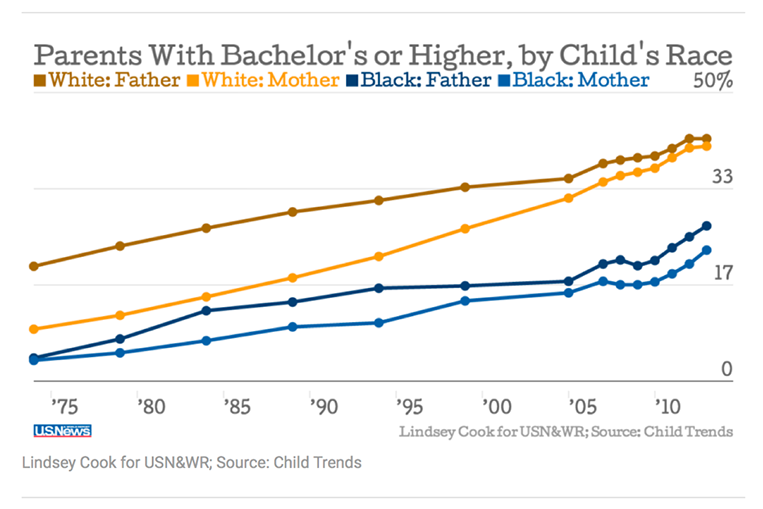 The data are conclusive: A better-educated population is a healthier population. Hahn and Truman argue compellingly that education is not only crucial to promoting health, it is actually an important part of health itself. “Basic educational expertise and skills,” they write, “including fundamental knowledge, reasoning ability, emotional self-regulation, and interactional abilities, are critical components of health.” This is very much in keeping with the World Health Organization’s definition of health as “a state of complete physical, mental and social well-being and not merely the absence of disease or infirmity.” That is then a reminder of the centrality of education to our work—both as a core part of our mission as a School, and as a fundamental goal of the work of population health.

Acknowledgement: I am grateful to Eric DelGizzo and Catherine Ettman for their contributions to this Dean’s Note.