Answer to Opioid Crisis: Treatment Instead of Jail

Last summer, Arlington Chief of Police Frederick Ryan was briefed on a plan to arrest a major heroin supplier. “I asked some very simple questions,” he recalled. “Do we know the identities of those buying their heroin from this dealer? The answer was yes.

“The follow-up question was, what are we doing to get these people services? The answer was nothing.”

Ryan realized his department was about to create a “public health crisis” by leaving a known population of addicted people suddenly without their supply.

This, Ryan explained, was when he knew his police department needed to try a new approach.

Ryan discussed that shift in thinking at “The Opioid Epidemic: Why Cops Are Sending People with Addiction to Treatment Instead of Jail” on March 16, part of the Dean’s Seminar Series on Contemporary Issues in Public Health.

He joined Leonard Campanello, chief of police of Gloucester and a BU alumnus, whose police department launched the Gloucester Angel Initiative on June 1 of last year. That program, which approaches addiction as a disease instead of a crime, inspired the Arlington police department and dozens of others, earned national headlines, and was the subject of a December 2015 segment on CBS’s 60 Minutes.

Soon after, Campanello also founded the Police Assisted Addiction and Recovery Initiative (PAARI) to support the Gloucester program and others like it. 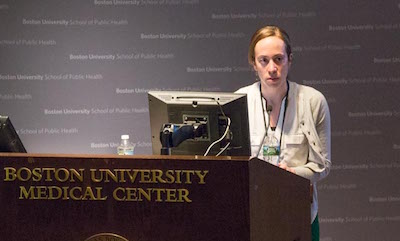 Davida Schiff, an instructor and general pediatrics fellow at the BU School of Medicine, presented data on the Gloucester Angel Initiative.

Rosenbloom, professor and interim chair of health law, policy & management, also spoke about this issue alongside Campanello at the BU Initiative on Cities Urban Seminar on March 1. Since the Angel Initiative began, Rosenbloom, along with Associate Professor of Health Law, Policy & Management Mari-Lynn Drainoni and colleagues at the School of Medicine, have worked with the Gloucester police department, monitoring the program to see if—and how well—it really works.

Rosenbloom began the seminar by handing the microphone off to his colleague Davida Schiff, an instructor and general pediatrics fellow at MED, to present what their research has found: from June 1 to February 15, 352 people have walked into the Gloucester police department asking for treatment. They came from all over the state, and 80 percent had been in treatment before.

Following up with past participants, she added, 35 out of the 47 contacted so far, or 74 percent, are not currently using opioids.

With that in mind, Rosenbloom, Campanello, and Ryan sat down to talk about the central question of this afternoon: Why would, or should, police departments take on this role in the face of the opioid epidemic?

For Campanello, the new approach came from listening to the community he had sworn to serve. “What the community was saying was, ‘We don’t want you arresting people with this disease anymore if you don’t have to.’

“Seeing death in large numbers,” he added, “led to this change.”

And social media proved the way to communicate this new approach. Campanello shared the plan on Facebook, announcing, “Any addict who walks into the police station with the remainder of their drug equipment (needles, etc.) or drugs and asks for help will NOT be charged. Instead we will walk them through the system toward detox and recovery.”

That post soon had 2.5 million hits and was shared 30,000 times in every state and 61 countries. “When you have Uzbekistan reading the Facebook post of a little North Shore city,” Campenello told the audience, “you get a very, very clear picture of how important this issue is to so many people.”

Soon after, the Arlington police department began outreach with people known to be addicted to opioids, with a clinician embedded in the department to help create plans toward treatment for those individuals and their families.

The Gloucester and Arlington models are now being adopted around the country.

What makes these approaches different from earlier efforts within the court system to get people into treatment, Campanello said, has to do with stigma.

“We’re very anti-coercion, anti-incentive, for this disease,” he explained. If even the threat of losing child custody doesn’t work, he said, “how is a charge of possession of an illegal substance going to incentivize someone to give up their disease?”

Stigma, Ryan agreed, is the major challenge here, even when it comes to implementing these kinds of programs in the first place. He described how, for decades, police have offered not to charge a drug user if they identified their dealer. “That’s discretion,” he said.

“We now apply that very same discretion—‘You go into treatment and I won’t charge you with a crime’—and prosecutors are saying, ‘I’m not so sure you have the authority.’”

The other major challenge, they agreed, is a broader system that is full of holes. “What is so cockamamie,” Rosenbloom asked, “so opaque, about getting help for the disease of addiction that people are flocking to police stations, where they could be arrested?”

“We’re now dispatching a clinician to an overdose in the ER,” Ryan answered. He explained his department has seen people brought into the emergency room after overdosing, released, and then fatally overdosing just hours later.

Police, as newcomers to the treatment field, are able to bring a level of optimism and creativity to the problem, Campanello added, along with the clout to help move someone through a complex and confusing system. “We ask very three-year-old-like questions,” he said, “which always begin with, ‘Why?’”

Throughout the discussion, both police chiefs returned to the idea at the heart of their programs: Police should serve their communities.

With public opinion of police far less positive in recent years, “it remains the police department’s responsibility to rebuild that trust,” Campanello said.