Beyond the Headlines: Brexit Implications for the UK and World 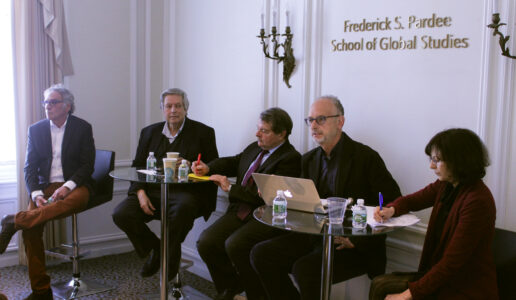 The Beyond the Headlines @BUPardeeSchool, or BtH, series at the Frederick S. Pardee School of Global Studies at Boston University continued on April 2, 2019 with a discussion on the current status of the Brexit referendum and potential implications of the referendum on the United Kingdom, United States and the world moving forward.

Goldstein discussed how over the last several years the Brexit referendum has become a divisive issues between the two major political parties in the United Kingdom, as well as within each of those parties.

“The issue has gone on being very much a party, political issue within the Conservative Party — the dominant ruling party for the last several governments in Britain — but it’s equally divisive inside the Labour Party,” Goldstein said. “The two predominant parties are fairly divided on the relationship from Europe, probably in some ways with the party memberships themselves being more about being out of Europe, but the members of Parliament themselves tilting toward being members of Europe. There’s a disconnect that’s been quite clear between the constituencies and the party loyalists and the members of Parliament who are the ones who deal with day-to-day policy.”

Dellheim said that the referendum has served as a focal point for a variety of long unresolved issues within the United Kingdom including questions about national identity and tensions surrounding the social, economic and technological changes resulting from deindustrialization.

“Perhaps the great tragedy of Brexit is that all of these issues, which I think feed into Brexit, not one of them will be resolved by whatever happens with the referendum or its Parliamentary outcome,” Dellheim said.

Wilson examined the extreme attachment to majoritarianism as a failure of the British political system, and how that larger failure is reflected by the Brexit referendum.

“This majoritarianism is of course reflected in the Brexit crisis in — to me — the bizarre view that a single, narrow vote nearly three years ago is so sacrosanct that it cannot be revisited — even by another popular vote,” Wilson said.

“The UK may or may not be the pillar of democracy, but it still looks at itself as a country that pays complete respect to the rule of law. In all of this, in spite of the political mayhem, at every single step the law has formally been respected,” Caruso said. “Since the beginning, the cage that is made of the rules that the United Kingdom is supposed to comply with has been taken very seriously by the United Kingdom — more so than any other EU member state.”

Beyond the Headlines is a regular series at the Frederick S. Pardee School of Global Studies which seeks to cultivate informed conversations among experts and practitioners on issues that are currently in the news headlines, but to do so with a focus on intellectual analysis and on longer-range trends. Recent Beyond the Headlines discussions have focused on topics including International Women’s Day, the most recent Brazilian elections, and the Rohingya crisis in Myanmar.