Beyond the Headlines: Women in Domestic and Global Governing 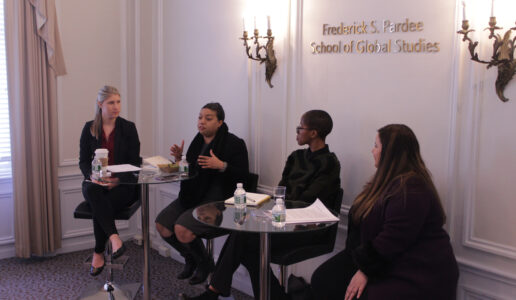 The Beyond the Headlines @BUPardeeSchool, or BtH, series at the Frederick S. Pardee School of Global Studies at Boston University continued on March 6, 2019, with a discussion on women in domestic and global governing.

The discussion, entitled “The Increasingly Visible Role of Women in Domestic and Global Governing,” was co-hosted with the  Pardee Women’s Group (PWG) and featured Rep. Liz Miranda, MA State Representative (D) of the 5th district; Manar Swaby, Director of the Language and Communications Access Program for the City of Boston; and Verginie Touloumian, Executive Director of the Armenian Relief Society. The conversation was moderated by Pardee Women’s Group President and Co-Founder Kristin Bruno (MAIA, Pardee ’19).

Rep. Miranda discussed her background growing up in the Dudley Triangle neighborhood of Boston, her education at Wellesley College, and the loss of her brother to gun violence as motivating factors for her decision to run for state office. She urged the students in attendance to be politically active while they are at school at Boston University.

“You guys are the perfect audience to talk to about not only running for office but supporting people who you believe in,” Miranda said. “It’s important that you are activated both locally and where you go to school. You spend eight months out of the year here or more, and a lot of times students if they don’t go home they won’t vote. This is your city, and so if you know you’re not going to be able to participate at home you need to participate in Boston.”

Swaby outlined how her love of language and writing help her discover her own voice and identity and discussed the work she does as Director of the Language and Communications Access Program for the City of Boston.

“Surround yourself with people in your affinity group — whether that’s women of color or something else,” Swaby said. “Working in government or any sort of institution there is a narrow pathway of how things are supposed to work. Just because something is supposed to work a certain way doesn’t mean it should, and I think surrounding yourself with people who are coming from a similar space as you can help you navigate that.”

Touloumian said that growing up in a family that valued feminism helped her realize the importance of both solidarity movements and lending support to other minority groups fighting for equality.

“I’m a really big believer in solidarity movements. Gender equality is not going to be won by women alone, we need male allies by our side,” Touloumian said. “We also need to fight for other minority group rights — all of these lead to the equality we want our children to inherit.”

Beyond the Headlines is a regular series at the Frederick S. Pardee School of Global Studies which seeks to cultivate informed conversations among experts and practitioners on issues that are currently in the news headlines, but to do so with a focus on intellectual analysis and on longer-range trends. Recent Beyond the Headlines discussions have focused on topics including the most recent Brazilian elections, the Rohingya crisis in Myanmar, politics of development research, and transnationalism and health in Asia.

The Pardee Women’s Group welcomes both undergraduate and graduate Pardee School students, but will focus on topics such as gender-based discrimination in the classroom and workforce, and will serve as a resource for students struggling with work-life balance and deciding what to do after leaving the Pardee School. Additionally, the Pardee Women’s Group promises to be a champion for socioeconomic inclusion and encourages all types of classroom diversity.

For information about upcoming events or for general inquiries visit the Pardee Women’s Group Facebook page or email PardeeWG.BU@gmail.com.