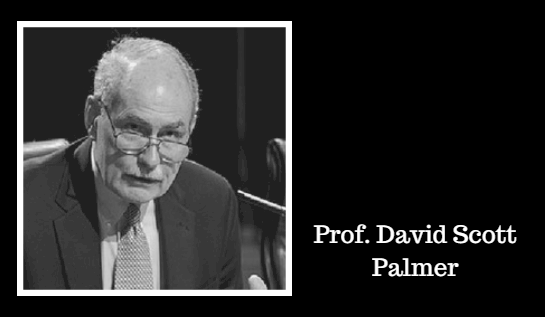 David Scott Palmer, Professor Emeritus of International Relations and Political Science and founder of the Latin American Studies Program at the Frederick S. Pardee School of Global Studies at Boston University, died of complications from cancer on April 28, 2018.

Palmer, a prominent scholar of Latin America and founder of the Latin American Studies Program at what was then the Department of International Relations and is now the Pardee School of Global Studies, was beloved by his students and faculty colleagues.

At Boston University, Palmer served as Director of Latin American Studies, Co-Director of the Peru Summer student exchange program which he helped found, Associate Chairman of the Department of International Relations, and Chairman of the Political Science Department. Palmer remained an active member of the Pardee School and Latin American Studies communities through the spring 2018 semester.

Palmer, a fierce supporter of both student initiatives and mentoring junior faculty, promoted academic exchange among Latin Americanists at Boston University and around the world throughout his career.

Scott touched the lives of many students and colleagues and will be missed greatly.

Associate Professor Taylor Boas (Political Science) describes him as, “The single most welcoming person to me as a new junior faculty member at BU. A great scholar, teacher, adviser, and a true lover of Latin America.”

“Prof. Palmer was one of the founders of what has now become the Pardee School,” said Adil Najam, Dean of the Pardee School. “His imprint is everywhere. Certainly, most profound in our Latin America Studies programs, but well beyond that. He was a gracious colleague, a kind advisor, a fierce advocate for students, a profound scholar and, most of all, a truly dedicated teacher. David Scott Palmer will be dearly missed.”

Palmer was memorialized in a May 6, 2018 obituary published in The Boston Globe:

In 1988, he became a professor at Boston University where he served as Chairman of the Political Science Department, Associate Chairman of the Department of International Relations, Director of Latin American Studies, and Co-Director, with his wife, Diane, of Peru Summer programs. Never really retiring, Scott stayed extremely active, climbing Mt. Moosilauke in New Hampshire on his 80th birthday and teaching his final semester at Boston University last fall. Throughout his life, Scott had a deep love and interest in Peru, his students, and his extended family.

Before joining the Boston University faculty, Palmer spent twelve years with the State Department as Chair of Latin American and Caribbean Studies and Associate Dean for Programs of the School of Area Studies at the Foreign Service Institute. He has also taught at a number of colleges and universities, including Bowdoin, Princeton, Georgetown, George Washington, The School of Advanced International Studies (SAIS) of Johns Hopkins, Salamanca (Spain), Catholic University (Peru), and The University of Chile.

Peru’s La Republica published a May 2, 2018 article on the impact of Palmer’s work on the field of Latin American Studies.

“Scott Palmer was a genuine intellectual, in the best sense of that term. His office was one flight up from mine, and every time he past by he dropped in to discuss some matter of import or interest with his thick New England accent,” said. William Keylor, Professor of International Relations and History at the Pardee School. “He and Diane were very welcoming hosts at the home. He divided his time between what he would call the Pahdee School and the Political Science Department, where he served as chair. He will be greatly missed by those of us who knew him and treasured their friendship with him.”

Palmer held the Federico Gil Chair in Political Science during his 2011 sabbatical at the University of Salamanca, Spain. He served as a Peace Corps Volunteer in Peru and was awarded a Fulbright Senior Lecturer Fellowship to the University of Huamanga (Ayacucho, Peru).

“Scott Palmer’s departure from this world is a profound loss for his family, his colleagues and his friends.  Equally saddened by his passing are the many students who benefitted from his dedicated teaching, his stunning knowledge of Latin American and his wise counsel,” said. Augustus Richard Norton, Professor Emeritus of International Relations and Anthropology at the Pardee School. “Scott was marvelously gregarious, remarkably energetic and he was always happy to share a good story or a laugh.  I frequently benefitted from his wisdom and I always knew that rock solid integrity was a given with Scott. His word was gold. I will miss him immensely.”

He wrote prolifically on the subject he loved,  and is the author of more than 40 articles and book chapters on such topics as the Latin American military, democracy and its challenges, “informal politics” in highland Peru, guerrilla movements in Latin America and Nepal, the Peru-Ecuador border dispute and its resolution, and the consequences of asymmetry in U.S. relations with Peru. He has published several recent articles on Shining Path and the 2011 Peruvian elections in readers and online publications.

“Scott Palmer was an extraordinary man – exceptionally accomplished as a scholar, teacher, and athlete, but unfailingly modest and kind.  His scholarly and policy work speaks for itself, but the greatest hole he leaves for me is personal,” said William Grimes, Associate Dean for Academic Affairs at the Pardee School.  “Over the years, I had countless conversations with Scott about international relations, curricular and administrative issues, students, and family.  I agreed with him much of the time, but enjoyed talking with with him every time.  To me, he was a real role model for how to live – he truly loved what he did as a scholar and teacher, to the extent that he never stopped either even after he “retired” in 2012.  Perhaps most important, he always followed Immanuel Kant’s exhortation to treat people as ends, not means.  His courtly manners reflected a genuine interest for others.  And he showed his affection for his students not just by being the best teacher and advisor he could, but by inviting them to his home, giving them frequent flyer miles to travel for research, and listening with genuine care.  I miss him deeply.”

Palmer published six books, most recently Power, Institutions, and Leadership in War and Peace: Lessons from Peru and Ecuador, 1995-1998. (Co-author, David Mares. Austin: University of Texas Press, 2012.) In 2006, he published U.S. Relations with Latin America During the Clinton Years: Opportunities Lost or Opportunities Squandered? He is co-author, with Thomas Marks, of the annotated bibliography of “Latin American Guerrilla Insurgencies” for Oxford Bibliographies Online (2011).

“I saw him interact many times with students in his kind, patient, persuasive way. He was inspiring to many and was as attentive to their needs in the last two weeks as he had been throughout his career,” said Amb. Paul Webster Hare, Senior Lecturer at the Pardee School. “He was also a congenial colleague who battled for the programs he had fought to create. And his knowledge of Latin America was encyclopedic. It took great courage and commitment to continue his work with students he had mentored in the last year. To be part of two thesis panels alongside him just a few days ago is a BU memory I will treasure.”