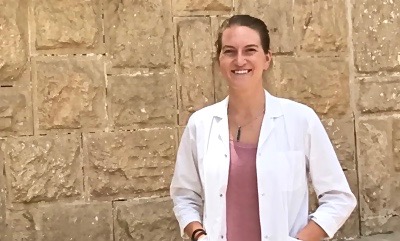 During rotations at Children’s Cancer Hospital Egypt, MPH student Emily Auwarter makes sure to visit the chemo room—because, she says, the kids are especially giggly. “I try to get up there and be with them as much as I can, just to throw myself in there and have a laugh or two,” she says. “Children, no matter what, will share a laugh with you.”

Auwarter is spending the summer in Cairo to conduct a comparative analysis of the hospital—also known as 57357 Hospital, the only pediatric cancer hospital in a country of 90 million people—and Dana Farber Cancer Institute in Boston. “For the past couple of years they’ve been building this teaching relationship where Dana Farber sends providers and resources to Cairo to adapt the protocols they use in Boston, and try to implement them here,” Auwarter says.

Auwarter came to Cairo through a fellowship from the Cancer Epidemiology Education for Special Populations (CEESP) program of the College of Public Health at the University of Nebraska, and funded by the National Cancer Institute and the National Institutes of Health.

To apply for a CEESP fellowship, Auwarter explains, she had to create her own research proposal and design a study on a vulnerable population in the US or abroad.

Auwarter says she first reached out to the director of CEESP well before applying, when she had only been at SPH for three weeks. “I barely knew anything about epidemiology, but he set me up with a mentor in Egypt,” she says. “By October I was Skyping with one of the department heads at the Children’s Cancer Hospital Egypt.” The department head told her about how Dana Farber had begun sending doctors to help implement protocol a couple of years ago, Auwarter says, and mentioned there had not yet been any analysis of how well it was working. Auwarter found a second mentor at Dana Farber and proposed the study.

Her study focuses on survival outcomes and incidence rates at the two hospitals. “Our hypothesis would be that the protocols they’re using in Egypt are the same as at Dana Farber, so they should be similar, but there are higher rates of mortality in Egypt,” Auwarter says. There are many reasons for the difference, she says: The Egyptian hospital is where all of the country’s pediatric cancer patients go, with three times the current cases compared to Dana Farber. About five to seven pediatric cases undergo radiation therapy a day at Dana Farber, she says, compared to up to 70 in Cairo. Funding is also much more limited at the Egyptian hospital, which runs on modest government salaries, donations, and aid—and provides all care for free. “There just aren’t enough resources to reach all of the kids at this hospital,” Auwarter says. “Dana Farber can give more of a per-patient protocol where here it might have to be more standardized, because you have to do whatever you can to give as much treatment as possible.”

Auwarter says friends have asked her how she keeps her spirits up, working with children undergoing treatment for brain cancer. “I don’t see it as a downside,” she says, “I see it as a reminder of why I’m here and that what I’m doing is important.”

Auwarter has an optimistic view of a difficult disease, going back to her own, personal experience. “When I was 5 I lost a sister to pediatric brain cancer,” she says. “I try to take the positive side, and since then I’ve wanted to research cancer and do my duty.” Working with Dana Farber has been a lifelong dream, she says, and getting to help Dana Farber help children in Cairo is an incredible opportunity.

Identifying and quantifying the differences between the two hospitals is the first step toward finding ways to better adapt Dana Farber’s care strategies to Children’s Cancer Hospital Egypt. Such a vast difference is hard to analyze, Auwarter says, but worth a try. “I’m passionate about breaking through those barriers,” she says. “Just because you’re in a lower-income country doesn’t mean you can’t pair up with someone in a higher-income country with resources and materials and work together.”

Following her comparative analysis on pediatric brain cancer, Auwarter says Dana Farber wants to do something similar with breast cancer. “It’s a bridge,” Auwarter says. “You can build a bridge for cancer education between a high-income, thriving hospital that’s willing to make the effort, and a lower-income hospital, and in the long term you hope for better outcomes on both ends.”

That big, global picture can sometimes feel overwhelming, Auwarter says, so she tries to focus on the task at hand, and making sure to share a laugh with the kids at Children’s Cancer Hospital Egypt.

For Cancer Care, Building a Bridge from Boston to Cairo