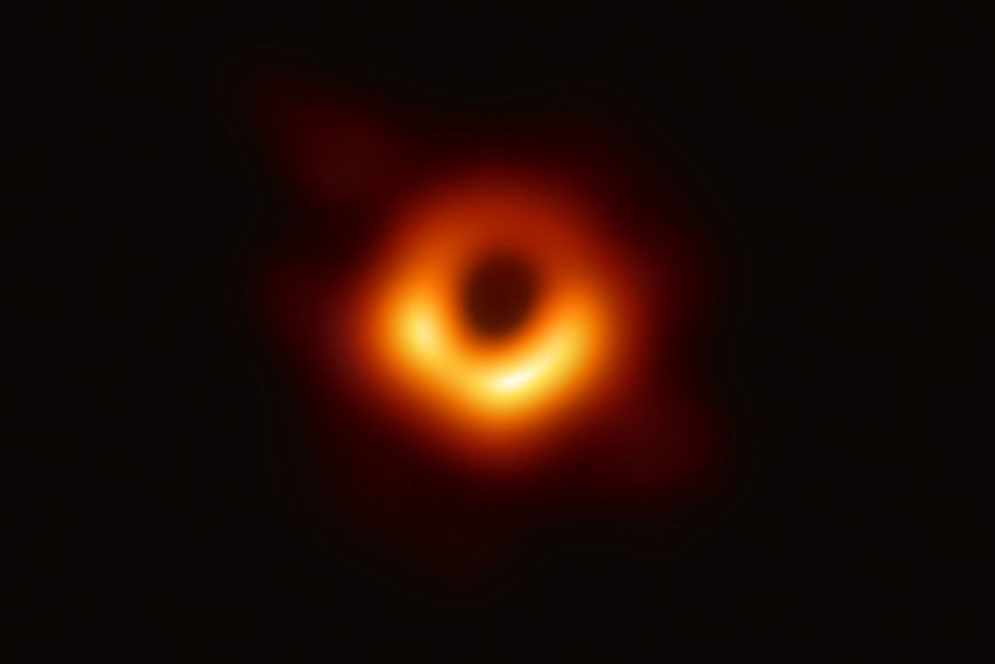 2019 will go down in history as the year that an international team of researchers, including two BU astronomers, captured the first image of a black hole. Photo courtesy of Event Horizon Telescope

From climate science to fake news, these discoveries are sure to keep making waves in the next decade

Still looking for a New Year’s resolution to guide you into 2020? If so, here’s some food for thought: Earlier this year, Boston University clinical researchers found that optimism could boost people’s chances of reaching the age of 85 by over 50 percent. But that’s not the only discovery from 2019 that’s sure to keep making waves in 2020 and beyond. From memory manipulation, to plastic pollution, to a real-life mute button, and a portable device that can instantly diagnose Ebola, here are the top 12 breakthroughs that Boston University researchers made in 2019:

For the first time, BU researchers can quantify just how damaging football play is to the brain. In a study of the brains of 266 deceased former amateur and professional football players, researchers at the BU Chronic Traumatic Encephalopathy (CTE) Center, led by Ann McKee, found that every year of playing American tackle football increases a person’s risk of developing CTE by 30 percent. For every 2.6 years of play, a person’s risk of developing CTE doubles. In a critical distinction between many previous CTE studies, the analysis included dozens of brains of former football players who did not have CTE.

What sounds would you mute if you could? Would it be the sound of traffic whooshing by, the roar of jet engines in the sky, or a nearby construction site? Your wishes could soon be granted—BU engineers, led by Xin Zhang, discovered how to mathematically design an object that can block the sounds of anything. The open, ring-shaped “acoustic metamaterial” cancels 94% of sound but still allows air and light to pass through its middle.

With the climate getting hotter, people will increase their use of air-conditioning to cool off. But all the extra energy required to power air-conditioners could make a bad situation even worse: BU climate scientist Ian Sue Wing projects that the world’s energy needs could be 25 to 58 percent higher by 2050. How we choose to generate the additional electricity for cooling will have big implications—burning more coal and fossil fuels would emit more greenhouse gases and further compound the rate of global warming.

Being unable to quickly distinguish between similar-looking fevers caused by Ebola or malaria was one of the major challenges that contributed to the 2014–2016 West Africa Ebola crisis. This problem inspired virologist John Connor at BU’s National Emerging Infectious Diseases Laboratories (NEIDL) to develop a diagnostic system that can identify Ebola, malaria, and other lookalike fevers in a half hour or less. Best of all? The system is designed to work in remote locations.

Science fiction is becoming science fact. BU neuroscientist Steve Ramirez discovered that a small structure in the brain could hold the keys to future therapies for depression, anxiety, and PTSD. In mice, he showed it’s possible to heighten positive memories and reduce the emotional power behind negative ones. If you could dial down the emotional impact of your worst memory, would you?

When a group of undergraduate researchers in BU marine scientist Randi Rotjan’s lab went to Belize to study parrotfish feeding behaviors, they stumbled upon the discovery of a lifetime. They found microplastics in seagrass samples, uncovering the harsh reality that all seafood chains—many which lead to our own dinner plates—are now contaminated with plastic.

The largest survey to date of mental health in college students revealed that gender minority students—whose gender identity differs from the sex assigned to them at birth—are up to four times more likely to experience mental health problems than the rest of their peers. The findings of this study, led by BU public health researchers Sarah K. Lipson and Julia Raifman, ought to spur higher education leaders into action to raise awareness of and better address the needs of gender minority students.

Did you know that toxins are literally flushed out of our brains while we sleep? BU neuroscientists published the first documented videos and images of cerebrospinal fluid (CSF) wave activity and blood flow during sleep. During non-REM sleep, our brains wash out toxic, memory-impairing proteins through large, slow waves of CSF. The takeaway? Prioritize getting enough Zs. It could help combat neurological and psychological disorders including autism and Alzheimer’s disease.

How familiar are you with native advertising? Could you recognize which online content is news and which is a paid promotion? More than 9 out of 10 Americans can’t tell the difference, found BU advertising researcher Michelle Amazeen in a startling study of how paid messaging is influencing the way people consume information. Most people surveyed in the study thought that the advertisement they were viewing on the New York Times website was, in fact, a news article.

Could universal background checks be the key to reducing gun violence in America? BU public health researcher Michael Siegel mined data from the Federal Bureau of Investigation (FBI) and the Centers for Disease Control & Prevention (CDC) to reveal that state gun laws restricting who has access to guns—not which types of guns are for sale—significantly reduces rates of firearm-related homicides.

Bluetooth devices have become part of modern life, connecting our wearables and home electronics to the power of the internet. But a team of BU computer engineers led by David Starobinski has found a vulnerability in several high-profile Bluetooth-enabled devices—including the popular activity-tracking Fitbit watch and smart pens—that could allow third parties to track a user’s whereabouts and behaviors.

Although black holes have long inspired fear and fascination in scientists and sci-fi storytellers alike, it wasn’t until this year that astrophysicists could confirm without doubt what black holes actually looked like. Because they have so much mass, black holes absorb all light particles, making them undetectable against the vast, dark backdrop of space. At least…until now. BU astronomers Alan Marscher and Svetlana Jorstad and a team of international collaborators finally captured the first image of a black hole, finding that it looked much like we thought it would, based on Albert Einstein’s theory of general relativity.