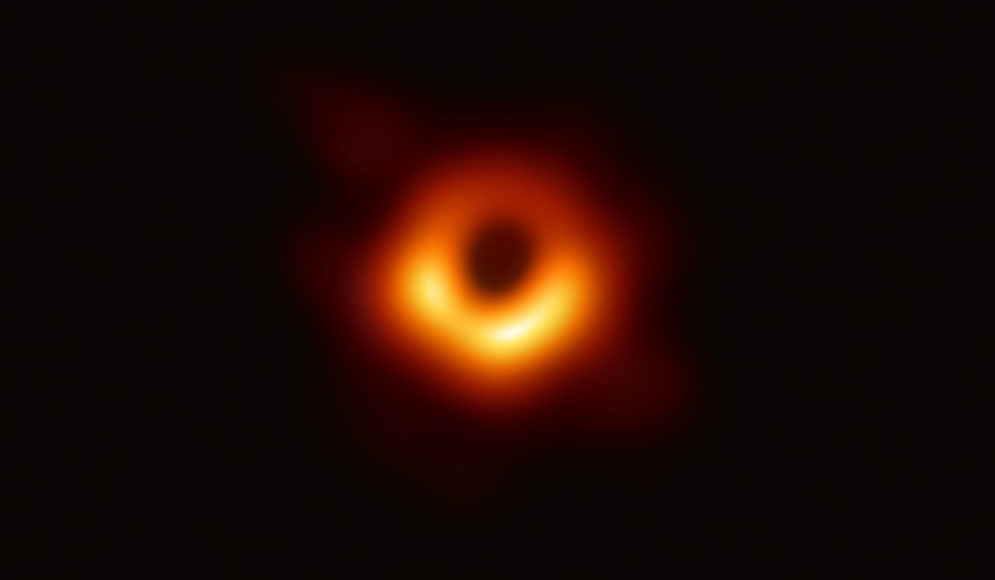 The first direct visual evidence of the supermassive black hole in the center of Messier 87 (M87) and its shadow. The shadow of the black hole seen here is the closest we can come to an image of the black hole itself, a completely dark object from which light cannot escape. Photo courtesy of EHT

For the first time, scientists have captured an image of a black hole. And it looks, perhaps unsurprisingly, exactly as scientists predicted.

“That does not happen very often,” says Alan Marscher, a Boston University professor of astronomy and a scientist on the team that captured the historic image. “Most theories are challenged by observations. There might be some disappointment among some of the astrophysicists when they see the images, saying, ‘Darn, that’s what we predicted.’”

Although black holes have never been seen before, astrophysicists have been mathematically certain, based on Albert Einstein’s theory of general relativity, that the presence of these cosmic magnets—exerting extreme gravitational pull from the center of galaxies—explains the swirl and trajectory of stars, planetary bodies, and space dust.

Because black holes have so much mass that their gravitational forces absorb all light particles, they have, until now, been completely undetectable against the vast, dark backdrop of space. So, how do you see something totally invisible? Marscher, Jorstad, and more than 200 other scientists from all over the world, known as the Event Horizon Telescope (EHT) collaboration, had to analyze literal boatloads of data collected from multiple telescopic locations. Their findings and the first black hole image from EHT were published in a series of six papers in the Astrophysical Journal Letters on April 10, 2019.

Collecting data from eight radio telescopes in different remote locations around the world, the EHT collaborators essentially created a planet-size telescope. This technique allowed them to achieve a telescopic resolution powerful enough to read a newspaper in New York from a sidewalk café in Paris. The telescopic network’s power is capable of cutting through the cosmic haze to magnify the EHT team’s namesake, a boundary known as the event horizon, the final point beyond which no light or anything else can escape from a black hole’s maw.

For the last several years, EHT has been working to image two supermassive black holes: Sagittarius A*, located in the center of the Milky Way, and one in the center of Messier 87 (M87), a galaxy in the constellation Virgo. That faraway region in M87, located 55 million light-years from Earth, is where scientists from EHT succeeded in taking the only direct image of a supermassive black hole and its surroundings ever captured.

“We knew there was something very compact at the center [of M87], but until you make an image of a black hole, you’re not sure,” says Marscher.

The black hole itself is, well, black—but is surrounded by a ring of light many times brighter than the sun. The light, created by high-energy particles swirling and heating up near the black hole, bends around the dark center before traveling as microwave light toward radio dishes here on Earth. In the center of the arcing light, the dark circular region is nicknamed the “black hole shadow.”

Seeing the ring of light and the black hole shadow is only possible with a technique called “very long baseline interferometry,” or VLBI, which combines signals from cosmic objects taken by high-precision radio dishes scattered around the Earth. Marscher and Jorstad’s research group at BU has been using VLBI and other techniques to investigate whether or not blazars, the most luminous objects in the universe, are powered by supermassive black holes. Blazars are found at galaxy centers, when matter being sucked into a black hole creates jets of high-energy particles that radiate intense light.

Marscher and Jorstad were invited to join EHT by its project director Shep Doeleman of the Harvard-Smithsonian Center for Astrophysics. The two worked with about 30 other scientists at Harvard’s Black Hole Initiative Center tasked with deciding which imaging techniques EHT should use to make high-quality pictures of the supermassive black hole.

Both Marscher and Jorstad plan to continue working on EHT data, with hopes of imaging the region farther from the black hole, where the jets of high-energy particles originate. Another goal, Jorstad explains, is to use the existing EHT data to see the structure of the magnetic field near M87’s supermassive black hole.

They, and the rest of the EHT collaboration, also hope to produce the first image of Sagittarius A*, the supermassive black hole swirling at the center of our own Milky Way galaxy, a hidden monster just 26,000 light-years from home.

Key funding for the EHT collaboration was provided by the US National Science Foundation (NSF), the EU’s European Research Council (ERC), and funding agencies in East Asia.

The First Black Hole Image Is Here
8
share this