Home » News & Events » On Urban Health, and the State of the Science

On Urban Health, and the State of the Science

Urbanization is one of the two most important global demographic shifts over the past 200 years, with the other being the aging of populations. The demographic evidence for urbanization is unquestionable, and well described in an accompanying Viewpoint that appears in this SPH This Week. As urbanization accelerated, the field of urban health emerged around the turn of the 21st century, concerned with understanding how, and why, cities influence health. An appreciation of the role that cities can play in shaping the health of populations is an extension of a growing scholarship around the role of context as an inextricable determinant of the health of populations, the subject of one of my previous Dean’s Notes. In many respects, that cities influence health is intuitive. Cities influence the food we eat, the water we drink, and the air we breathe. Urban living can affect everything from available food to walkability to the spread of infectious diseases. Early writing in the field was focused on challenges to the health of populations in cities, including the coining of the term “urban health penalty.” However, as the field has matured, it has become readily apparent that the relationship between urban environments and health is complex, and that a range of determinants of health, both positive and negative, characterizes the urban experience. In the past decades, an equally apparent “urban health advantage” has emerged where, particularly in high-income countries, overall health in urban areas surpasses that of non-urban areas.

In an effort to rationalize the full set of determinants of health within urban environments, we suggested that three particular factors be considered as drivers of health in cities: the physical environment, the social environment, and access to health and social services. Examples of how these factors influence health abound in the literature. But, perhaps the abstraction of “urban health” is brought home more acutely when one considers our home, Boston.

In a series of analyses, we have previously shown the remarkable heterogeneity of health within Boston. Mapping conditions on T-stops, for the sake of illustration, we can see in Figure 1 the heterogeneity in adult non-communicable disease indicators such as diabetes in Boston. 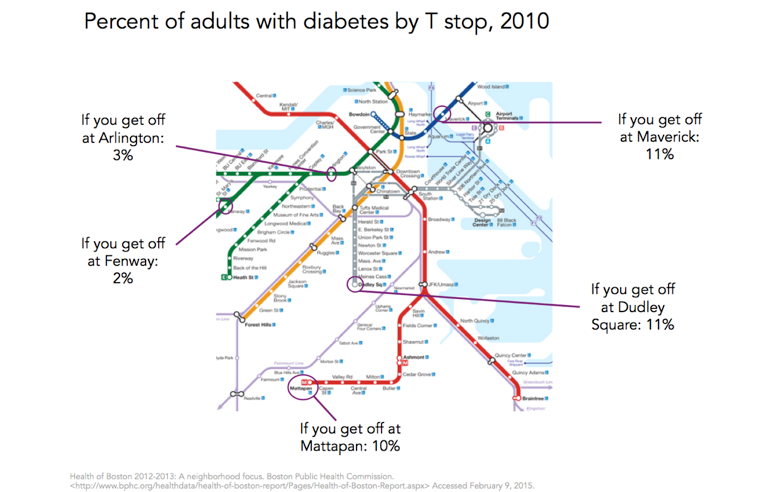 As we well know, these health indicators are closely linked to a broad range of social indicators that are unevenly distributed across the city. Poverty is a frequently used summary indicator of socioeconomic position, well established as a marker of a broad range of other adversities. It is then not surprising, given the map above, that poverty rates in some parts of Boston are four to eight times higher than those surrounding the healthier stops on the T (Figure 2). 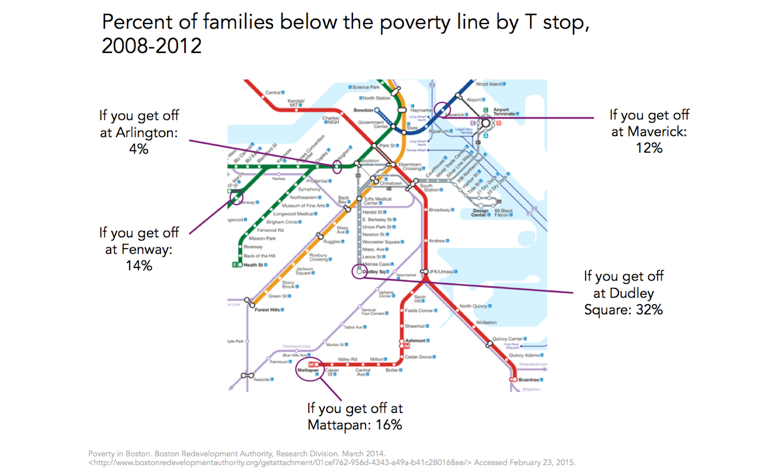 Other measures of socioeconomic position, such as education, track accordingly, with a graduate education being three or more times more common around the Arlington and Fenway stops than around Dudley Square, Mattapan, or Maverick stations (Figure 3). 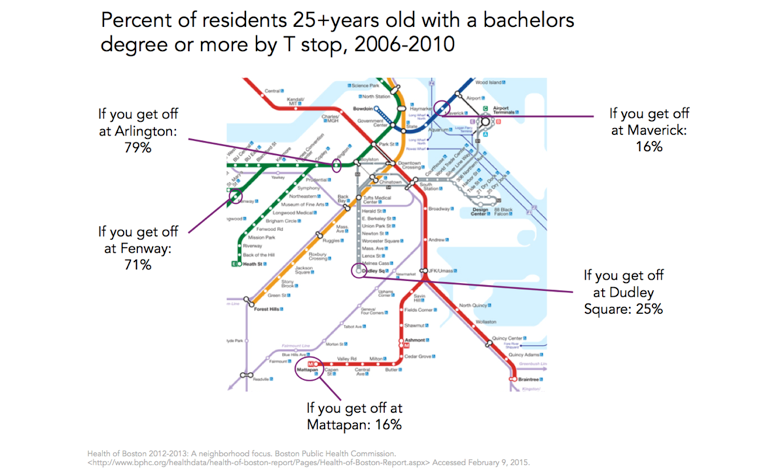 And these differences are associated with commensurately poor health behaviors, such as physical activity, that are substantially lower on the Red Line at Mattapan than on the Green Line at Fenway, for example (Figure 4). 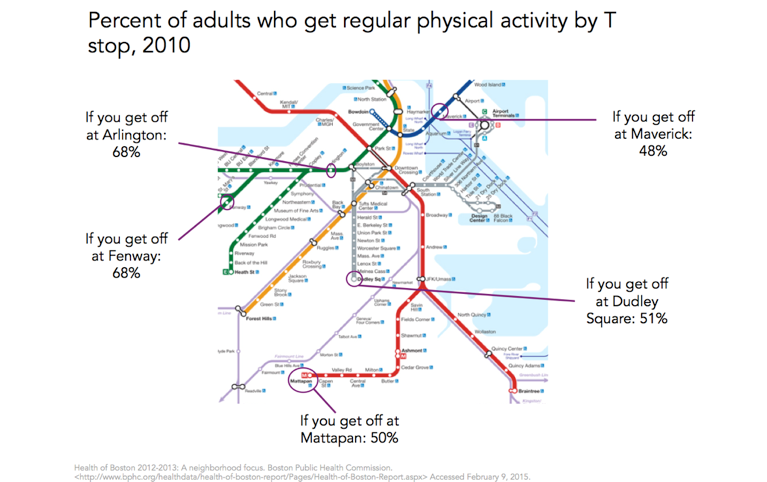 Inured as we are to inequalities in health, we might well shrug off these health differences as ones between far-apart worlds. But are they? In fact, the geographic space we are talking about here is remarkably small (Figure 5). We are dealing with geographic differences of roughly four miles, or about an hour’s walk. In many respects, it is remarkable that areas so close to one another should have such dramatically different health indicators, “health worlds apart” that are simply down the street from one another. 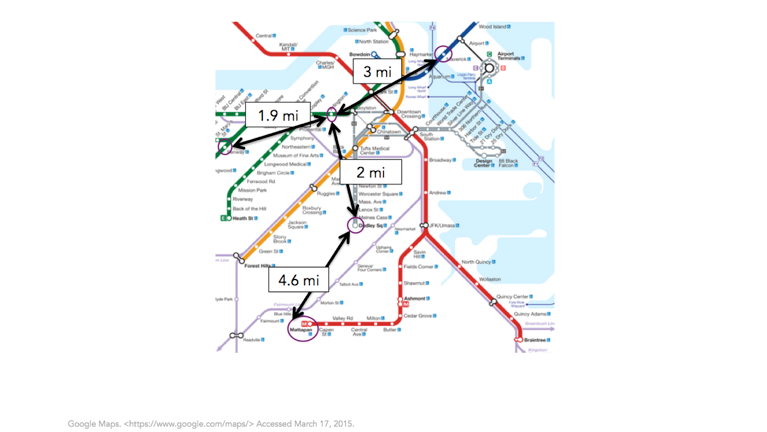 Importantly, as we think about health in cities, we recognize that many of these differences are not driven by differences in health services. Boston is characterized by an incredible density of physicians and hospitals throughout the city (Figure 6). It is therefore not surprising that none of the T stops we are discussing are particularly far from medical facilities. Clearly, medical centers differ in terms of populations served and variations in availability of care, but as the map below shows (and as can be verified through much more thorough analysis), there are negligible differences in the physical distance of these neighborhoods to quality medical care. 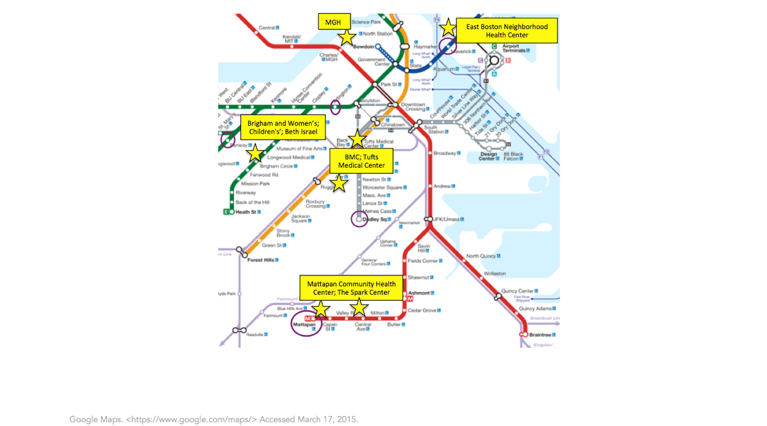 This, then, tells a story of a city with health characterized by heterogeneity across proximal geography, driven undoubtedly by the conditions of health in the city. And, this being Boston, we have a fair bit of literature that has considered the urban characteristics of the city that shape the health of the populations who live here. For example, a spatial study by Dustin Duncan and colleagues compared open recreational space to neighborhood characteristics and found that neighborhoods with a high proportion of non-Hispanic black residents had significantly less open space, increasing obesity risk due to lack of physical activity. Another study focused on physical activity used the 2008 Boston Youth Survey to show a relationship between high social fragmentation in a neighborhood and lower physical activity among adolescents. Consistent with research in other cities, study after study show that many of the indictors that are associated with poor health cluster together. The lowest-income neighborhoods in Boston coincide with those that have less open green space and worse health outcomes. In many studies, area-level poverty serves as a ready marker for the accumulation of factors that adversely affect health in urban areas. In the aforementioned Boston study, Chen and colleagues found that the incidence of premature mortality rates was 1.4 times higher in the most economically deprived census tracts compared to those in the least impoverished tracts. They also found an attributable fraction of 25 percent to 30 percent of excess deaths due to living in high-poverty census tracts. These census tracts with the highest poverty have also consistently been found to have the highest proportion of black residents and the lowest levels of education.

In many respects, the study of health in cities presents a tremendous opportunity, both for a multi-level understanding of population health and for our urban school of public health to find a focus for scholarship and action. Clearly, factors at the political, structural, social, and service delivery level are jointly responsible for the health of urban residents, and an understanding of the dynamics that knit together this causal web presents opportunities for both knowledge and, potentially, intervention. There is growing momentum towards building movements that aspire to healthier cities, with emerging municipal efforts that aim to capitalize on the growing political latitude that cities are enjoying towards the development of innovative approaches to promote urban health. This strikes me as presenting us, in the academy, with an opportunity to marry multiple strands of the core mission of academic public health. Scholarship that aims to understand how cities influence health, and how the urban environment gets under the skin, can be interesting, formative, and productive. Our students overwhelmingly come from, and will overwhelmingly work in, urban areas, presenting an opportunity for grounding our scholarship and educational experience in our students’ salient present. And urban environments present translational opportunities that can, through partnerships with colleagues in practice, contribute to opportunities to improve the health of populations, and allow us to do well by doing good.

To the end of understanding better the study of urban health, and the state of the science in the field, I am much looking forward to the symposium we are hosting this week called Urban Health: State of the Science. I look forward to seeing many members of our community there.

Acknowledgement: I would like to acknowledge the help of Laura Sampson on this Dean’s Note.