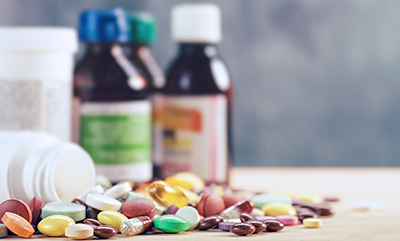 People living with HIV are at increased risk of both polypharmacy—the prescription of multiple medications to treat HIV and other health conditions—and non-fatal overdose, studies have shown.

Now, a team of researchers from the Schools of Medicine and Public Health and Boston Medical Center has found that the elevated risk from polypharmacy is not due to more medications overall, but is largely due to a higher number of sedating medications, including prescribed opioids.

The study, published in the Journal of Substance Abuse Treatment, examined the effect of the number and type of medication on non-fatal overdose risk among individuals with HIV infection and substance dependence. It found that each additional sedating medication was associated with an approximately 25 percent increase in the odds of lifetime non-fatal overdose.

“Although treatment with antiretroviral medications has transformed the lives of people living with HIV, the increasing number of medications needed to treat HIV and concomitant health conditions such as heart disease, trauma-related mental health disorders, and addictions. We wanted to know whether there are risks related to the number of medications,” said lead author Theresa Kim, assistant professor of medicine at MED and a physician/researcher at Boston Medical Center.

The study—part of the Boston ARCH Cohort Study—found that the median number of prescription medications was 10 and that 80 percent of patients were prescribed at least one sedating medication. The researchers said their findings suggested that the lifetime risk of non-fatal overdose from more sedating medications was mostly driven by prescription opioids versus other kinds of medications. Co-prescribed opioid and non-opioid sedating drugs also were associated with a higher risk of non-fatal overdose.

The researchers said there were several possible reasons for the associations between polypharmacy and overdose: More medications contribute to the complexity of treatment regimens, with the potential for a less careful inspection of the medication list by providers; and safer management of opioids and other sedating medications could be competing for providers’ attention to HIV- or addiction-related problems. It is also possible that additive sedating effects will lead to overdose in some people.

The lead authors said examining overdose risk in HIV populations is important because patients with HIV are at greater risk of overdose death than those without. In this study, 37 percent of patients had ever experienced at least one non-fatal overdose.

“Steps to address polypharmacy-related overdose risks could include treatment of addiction, addressing health conditions with non-medication options when relevant, reviewing medications regularly to assure prescription of those with efficacy, and elimination of combinations known to be potentially harmful,” said co-author Richard Saitz, professor and chair of community health sciences and principal investigator of the Boston ARCH cohort study.

The study was funded by the National Institute on Alcohol Abuse and Alcoholism, with support from the National Center for Advancing Translational Science.