Oligodendrocytes are the myelin-forming cells of the central nervous system. They are characterized by having dark round, oval and sometimes irregularly shaped nuclei, in which chromatin is clumped both beneath the nuclear envelope and throughout the nucleoplasm (Fig. 12.1).  The cell bodies have somewhat irregular outlines and the cytoplasm is characteristically dark. The cisternae of the endoplasmic reticulum are rather wide and short and tend to be arranged circumferentially around the nucleus. The cytoplasm is also rich in ribosomes. Processes are frequently seen to arise from the cell bodies. Like the cell body, the processes have a dark cytoplasm and contain an abundance of closely packed microtubules (Fig. 12.2). It is at the ends of the processes that myelin sheaths are generated. Oligodendrocytes are most abundant in white matter (Fig.10.1), but they also occur in gray matter, sometimes as satellites to neurons (Fig. 12.3). When they are adjacent to neurons the plasma membranes of the neuron and the oligodendrocyte come into close proximity, so that dark patches, which appear to be primitive junctional zones are evident at the interface. (Fig. 12.3)

The oligodendrocytes in old monkeys often contain inclusions that resemble lipofuscin, and such inclusions can occur in both the perikaryal cytoplasm and in swellings that occur along the processes of oligodendrocytes (Figs. 12.6, 12.7, 12.7A). The origins of these inclusions are not known, but it is possible that the processes with swellings are connected to myelin sheaths that are undergoing degeneration. Whether this is the case can only be determined by carrying out three-dimensional reconstructions, and this has not been done.

A typical oligodendrocyte in layer 4 of the primary visual cortex of a 32 year old monkey. The cell has a rounded, dark nucleus with clumped chromatin. The cytoplasm is also electron dense and contains short cisternae of rough endoplasmic reticulum with numerous short mitochondria.  It is common for these cells to have some dark inclusions in their cytoplasm. 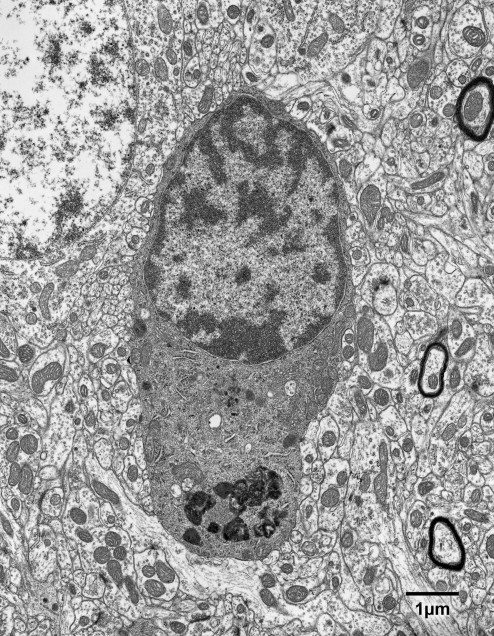 An oligodendrocyte in the anterior commissure of a 12 year old monkey. This cell has a long process emanating from the cell body and although the connection is not apparent it can be assumed that this process is connected to an internodal length of myelin. 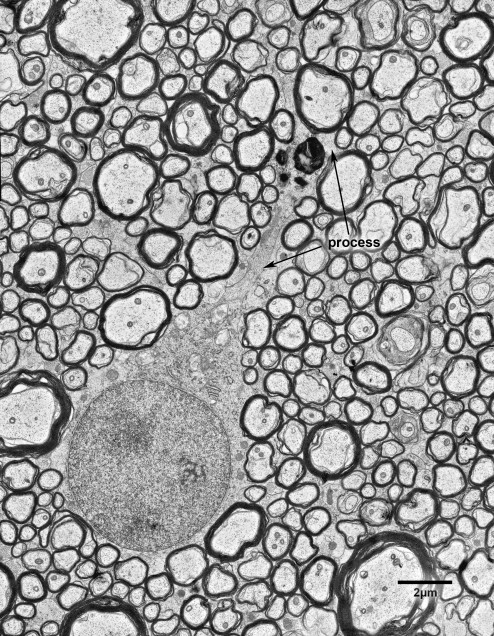 An oligodendrocyte adjacent to a neuron in layer 5 of the visual cortex in a 35 year old monkey. Oligodendrocytes in satellite locations are not infrequent and are sometimes regarded as a subset of the oligodendrocytic population. Small dark patches (arrows) are commonly seen along the interface between the oligodendrocytes and neurons, and these patches appear to be primitive junctional zones. 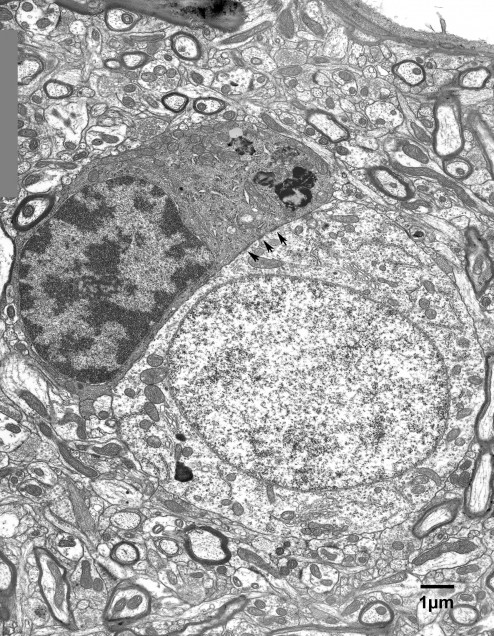 A group of oligodendrocytes in layer 5 of the primary visual cortex of a 25 year old monkey.  Pairs and groups of oligodendrocytes become more common with age and their origins are unknown, since it is generally assumed that mature oligodendrocytes do not undergo division. Note the numerous inclusions in the cytoplasm of one of the cells. Although it is not yet known for certain, it is likely that these inclusions are derived from the breakdown of the myelin sheaths that belong to such cells. 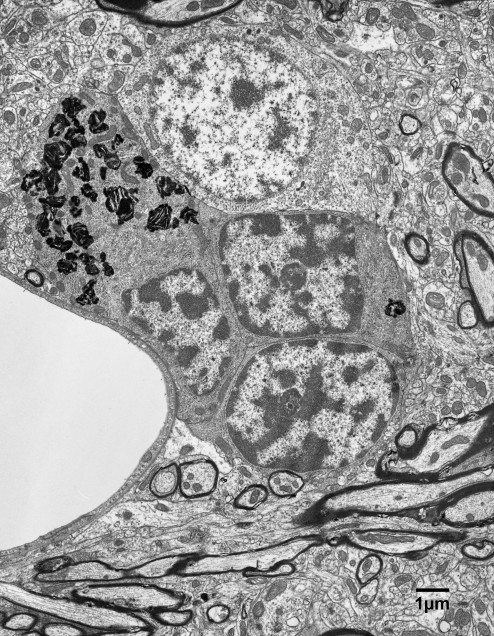 Another nest of oligodendrocytes in layer 4 of the primary visual cortex of a 28 year old monkey shown at higher resolution. Each of the three cells has some inclusions in its cytoplasm. 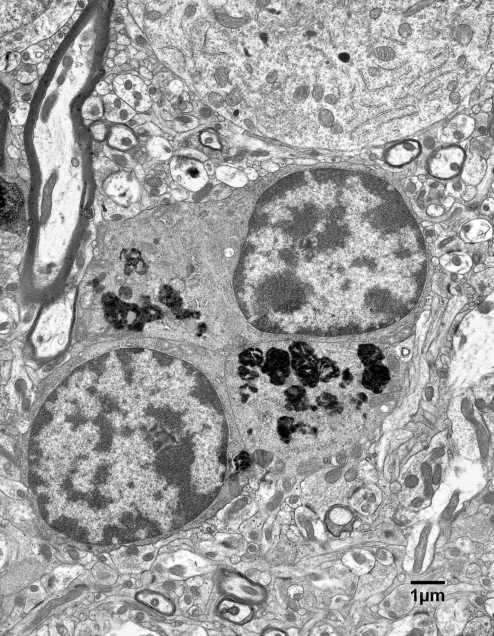 An oligodendrocyte in layer 4 of the primary visual cortex of a 35 year old monkey. Note the long thin process extending from this cell. Such processes connect the oligodendrocytes to their internodal lengths of myelin. The profiles of such processes can be recognized, and distinguished from the profiles of axons, by their electron dense cytoplasm and their closely packed microtubules. 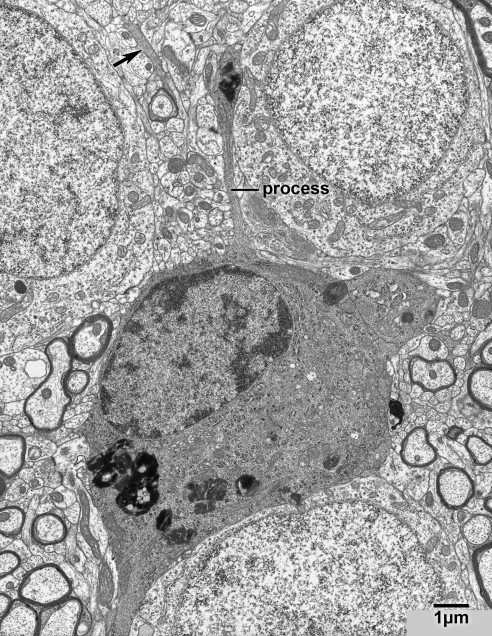 An oligodendrocyte in layer 4 of the visual cortex of a 35 year old monkey. The process extending from the cell body of this oligodendrocyte has a large swelling that is full of dense inclusions. It remains to be proven, but it is likely that the inclusions are derived from a degenerating sheath to which the cell is attached. 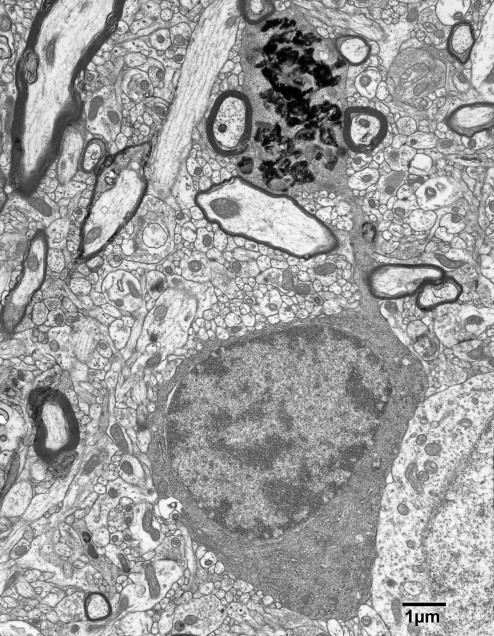 A copy of the electron micrograph is Fig. 12.7, in which some of the cellular components have been colored. Oligodendrocytes- red; neuronal cell bodies and dendrites- blue; dendritic spines- grey; axon terminals- green; astrocytes- yellow. 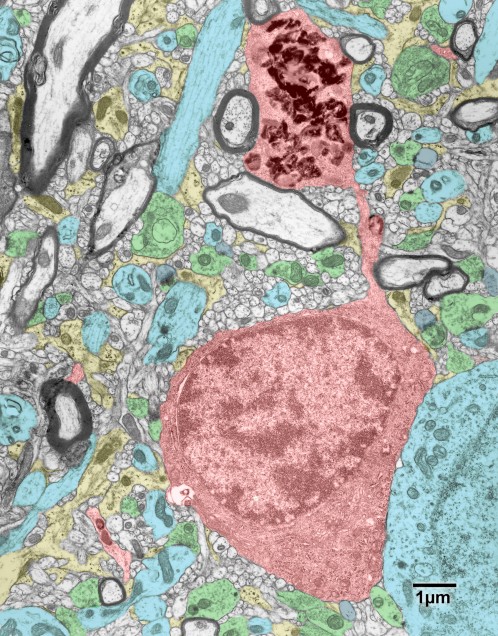