The electron microscope images in this collection were taken by Alan Peters, from material and thin sections prepared by Claire Folger (Sethares). These images have been selected from several hundreds of images taken over the past twenty years. The images were taken on 3 x 4 inch sheet film and have been scanned at high resolution. 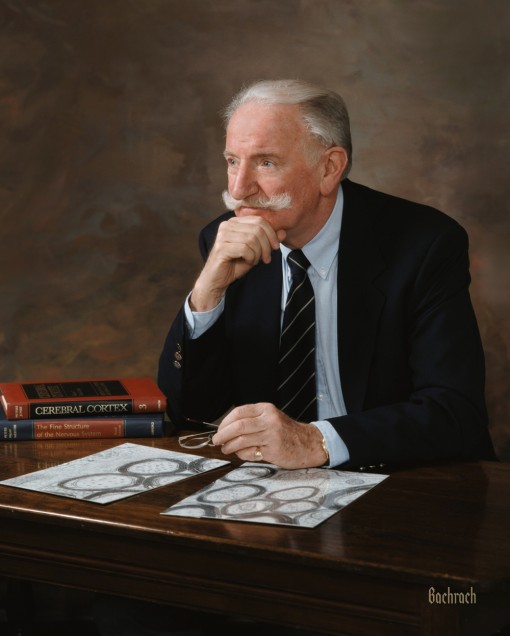 Alan Peters received his Ph.D. in zoology from the University of Bristol and after completing his two years of required Army service, in 1957 he took up a postdoctoral position in the Department of Anatomy at the University of Edinburgh with George Romanes. There he learned electron microscopy from Alan Muir, and in 1960 published images to show, for the first time, the structure of myelin sheaths in the central nervous system. In 1963 he spent a year at Harvard with Dr. Sanford L. Palay, returned to Edinburgh for two years and in 1966 was appointed the Chairman and Waterhouse Professor of Anatomy at Boston University. This allowed him to continue to collaborate with Sandy Palay and in 1970, together with Harry Webster, they published the first edition of their text on “The Fine Structure of the Nervous System. The Cells and Their Processes.” The third edition of this text was published in 1991. Alan Peters resigned from the chairmanship of the Department in 1998, and after working mainly on the structure and connection of cells in the cerebral cortex, he began to spend more time working on the effects of normal aging of the primate brain. Alan Peters’ awards have included the Cortical Discoverer Award from the Cajal Club (1991), the Henry Gray Award form the American Association of Anatomists (1998), the Sanford Palay Award (2004), and an Honorary Doctor of Science degree from the University of Edinburgh (2011). 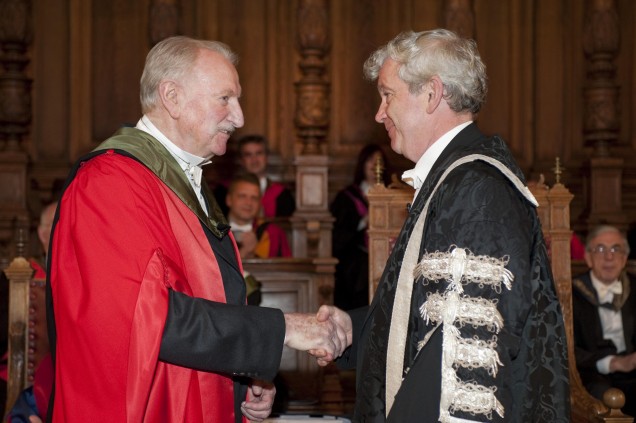 Dr. Alan Peters receiving his Honorary Doctor of Science degree from the Principal of Edinburgh University, Professor Sir Timothy O'Shea at the graduation ceremony in June of 2011.

In 1995, the Journal of Comparative Neurology published a special issue honoring the life and career of Alan Peters. The edition begins with Dr. Sanford L. Palay’s   “A Memoir in Appreciation of Alan Peters on his Sixty-Fifth Birthday”. In 2006, Alan Peters participated in the series: The History of Neuroscience in Autobiography, Volume 5 edited by Larry R. Squire, and an interview with Dr. Alan Peters can be found in the IBRO publication: Distinguished Scientists Interviewed: Alan Peters. 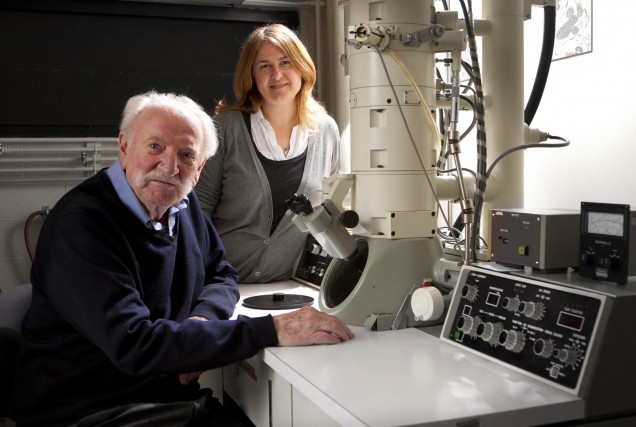 Dr. Alan Peters and Claire Folger (Sethares) with the JOEL100T electron microscope at Boston University Medical School, where all the micrographs on this site were produced.

Claire Folger (publishing under the name Claire Sethares) received her B.S. in Biology at Southeastern Massachusetts University in 1985, and came to work at Boston University Medical School in 1986, beginning as a junior Research Technician, and now the most senior member of the laboratory. Claire has lent her assistance to the preparation of all the material for the aging studies that have been conducted in the lab. She has been co-author on more than 20 papers with Dr. Peters.