Some 20 to 40% of myelinated nerve fibers are lost from fiber tracts with age, so that nerve fibers with altered axons in various stages of degeneration are encountered in electron micrographs, especially those from old monkeys. The beginning of degeneration of some axons is characterized by an accumulation of mitochondria and lysosomes in the axoplasm (Figs. 4.1, 4.2, 4.3, 4.3A and 4.4), and sometimes accumulations of neurofilaments (Fig. 4.5), ultimately leading to darkening to the axoplasm (Fig. 4.6). It is assumed that these alterations eventually lead to the complete degeneration of the axon, resulting in the production of empty myelin sheaths (Figs. 4.7, 4.7A, and 4.8).

Dystrophic axon in layer 4 of area 46 in a 25 year old monkey. The axoplasm contains an accumulation of modified mitochondria as well as a few lysosomes. 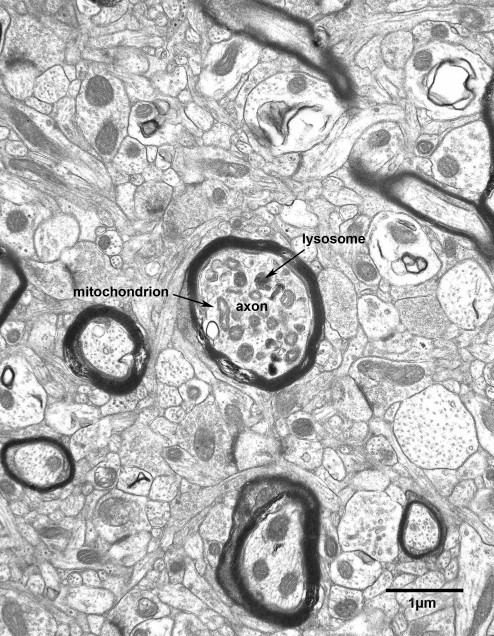 A large swollen myelinated axon, with a diameter of about 6 microns, in the fornix of a 30 year old rhesus monkey. This type of swelling appears to result from a damming up of axoplasmic flow, causing the axon to become very swollen. This probably results in the accumulation of organelles, many of which appear to be modified mitochondria, intermixed with some lysosomes and other structures, the origins of which cannot be identified. 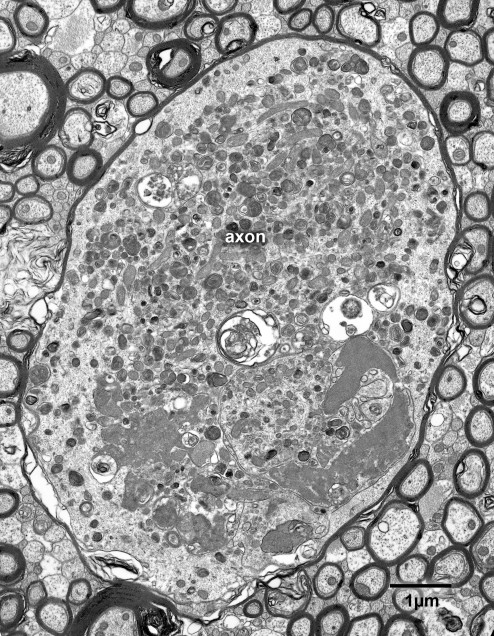 Another example of a swollen myelinated nerve fiber in the primary visual cortex of a 30 year old monkey. The axoplasm contains a central core of neurofilaments surrounded by an accumulation of mitochondria and lysosomes. 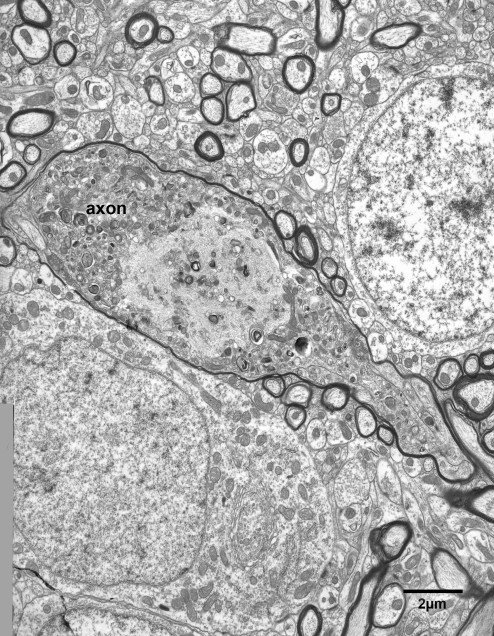 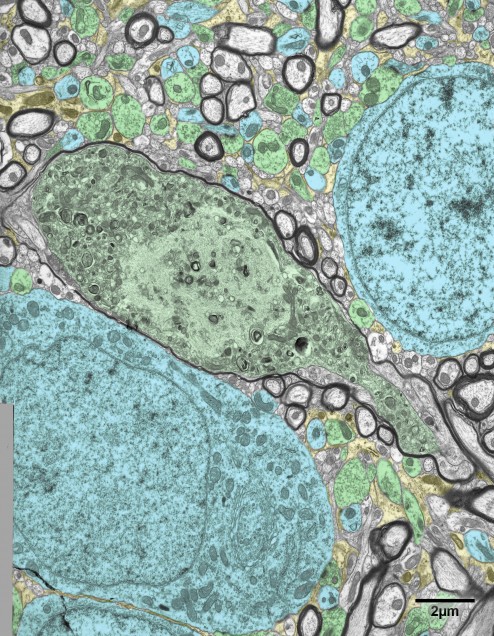 A swollen nerve fiber in the anterior commissure of a 24 year old monkey. The cytoplasmic contents of this axon are different from the previous two examples. There are a few profiles of what appear to be modified mitochondria at the periphery of the axon, but most of the axoplasmic contents appear to be membranous, including some structures that have the appearance of pieces of myelin. This may be an early stage in the degeneration of a swollen nerve fiber. 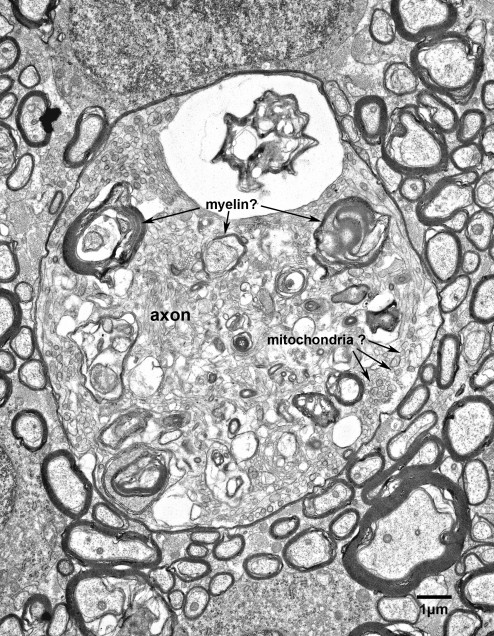 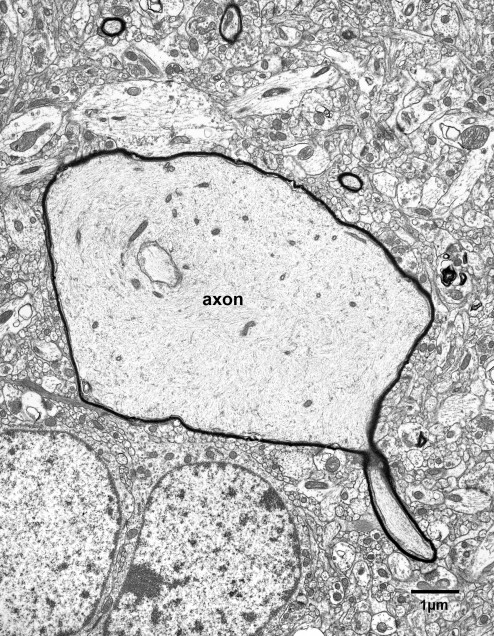 A nerve fiber with dark cytoplasm in the anterior commissure of a 29 year old monkey. It is generally assumed that such dark axons are undergoing degeneration. 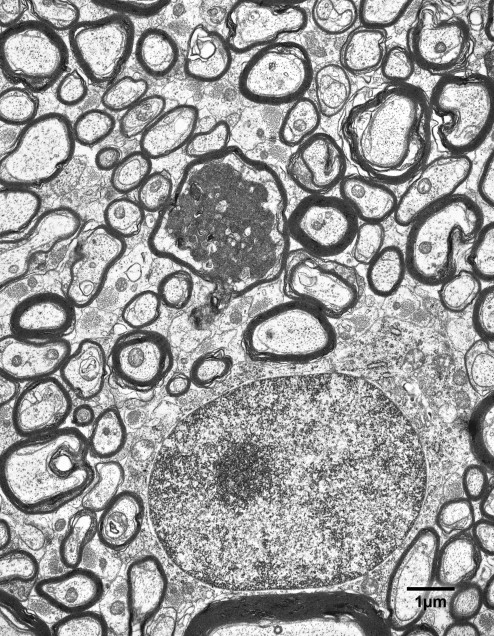 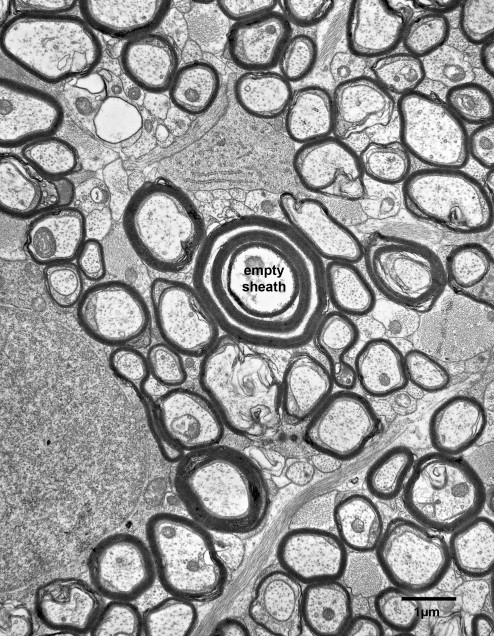 A copy of the electron micrograph shown in Fig.4.7 with some color added. The myelinated axons are colored green. 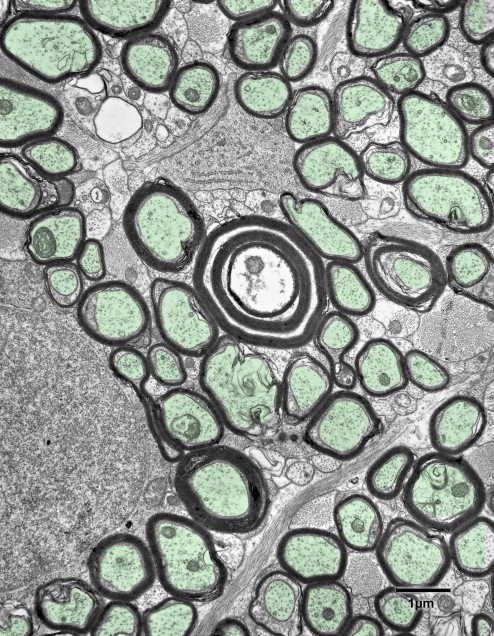 Two empty myelin sheaths in layer 4 of the primary visual cortex of a 12 year old monkey. There are the remains of some axoplasm, including the profile of a mitochondrion, inside the sheath of the larger of the two nerve fibers and as in the previous example the lamellae of this sheath are split. The axon within the smaller myelin sheath has completely degenerated. 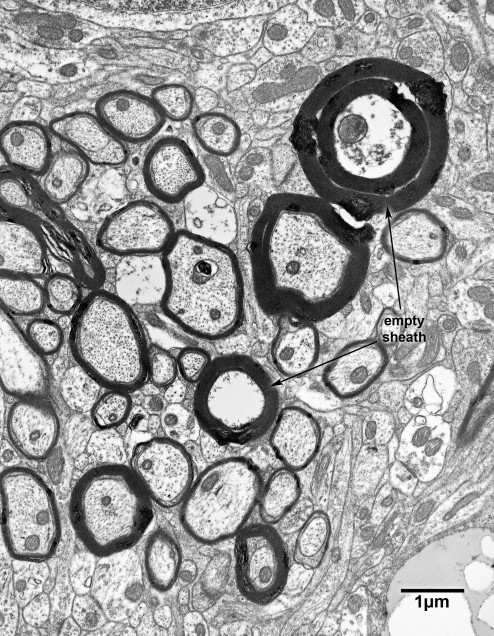