Pyknotic cells that have electron dense cytoplasm can be produced by poor fixation and by treating fixed tissue harshly. Generally, in such cases the pyknotic cells occur throughout the tissue block, and the affected cells display severe shrinkage and pulling away for the surrounding neuropil. Dark cells that are not pyknotic do occasionally occur in the brains of old monkeys and it is assumed that these cells are dying.

Figure 16.1 shows a dark neuron in layer 1 of prefrontal area 46 of a 25 year old monkey. The rod like nuclear inclusion indicates that this is a nonpyramidal cell, as does its location in layer 1. The perikaryal cytoplasm is vacuolated and this appears to be due to swelling of the cisternae of the endoplasmic reticulum and of the Golgi apparatus.

Figure 16.2 shows a dark cell in layer 4 of visual cortex of a 25 year old monkey. In this cell the nucleus appears to be fragmented and in addition to a number of dense inclusions, the cytoplasm contains an accumulation of unusual spherical structures. The identification of the cell is uncertain, but the fact that myelin sheaths directly abut the cell and there are no spaces between the surfaces of the sheaths and the plasma membrane of the cell suggest that it is a dying oligodendrocyte.

A degenerating neuron in layer 1 of area 46 in a 25 year old monkey.  It is not common to encounter degenerating neurons , since there is no significant loss of neurons with age. The cytoplasm and nucleus of this neuron have become electron dense, and the cisternae of rough endoplasmic reticulum and the nuclear envelope are distended. 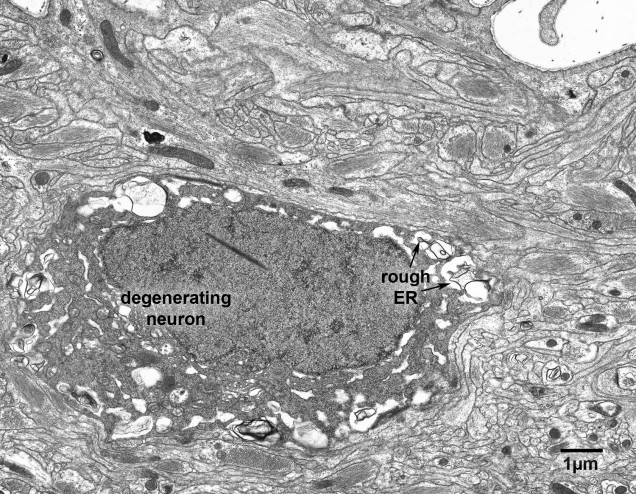 A dark cell in the primary visual cortex of a 23 year old monkey. The cytoplasm contains a group of small spherical bodies as well as what appear to be autophagocytic vacuoles. There are no obvious clues as to what type of cell this was, but the very close proximity of the adjacent myelin sheaths suggests that it might have been an oligodendrocyte. 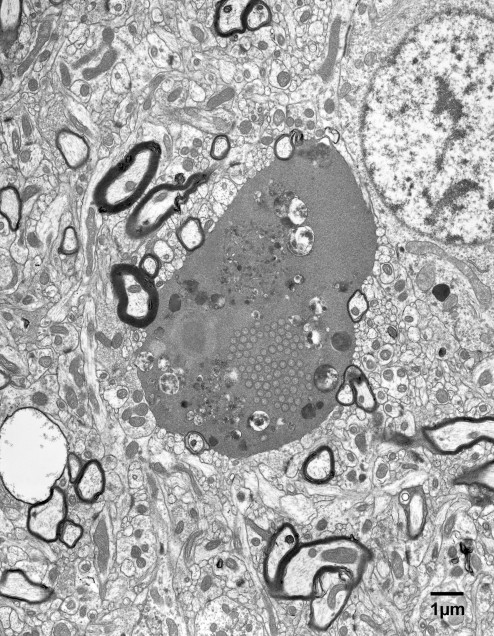