Dendrites are processes that extend from the cell bodies of cortical neurons. They travel singly through the neuropil and have a cytoplasm that contains regularly spaced microtubules, ribosomes and rough endoplasmic reticulum, mitochondria, and long cisternae of smooth endoplasmic reticulum (Figs. 2.1 and 2.1A).

1.     The profiles of some dendrites in the cortices of old monkeys show a cytoplasm devoid of organelles beyond a few microtubules beneath the plasma membrane (Fig. 2.2). Profiles such as these are common in layer 1 of the aging cortex, a layer which becomes thinner with age as the apical tufts of pyramidal neurons retract and degenerate.

3.     Profiles of some dendrites in the aging cerebral cortex have membrane bound vacuoles in their cytoplasm (Figs. 2.4 and 2.5).

Some profiles of dendrites that show dendrites being invaginated by protrusions from myelin sheaths have also been encountered (Fig. 2.7). Such protrusions may also be the source of profiles of dendrites that contain membranous components in their cytoplasm, the assumption being that such profiles arise when the protrusion from the myelin sheath is not in the plane of section. Such protrusions of myelin lamellae into dendrites appear to have been first described by Antal and Szekely (1987) in frog spinal cord. The significance of this phenomenon is not yet evident, but Antal and Szekely (1987) suggested that the dendrites may be phagocytozing the myelin lamellae as part of the process of turnover of myelin sheaths.  Antal, M. and Szekely, G. 1987.  Phagocytosis of myelin fragments by dendrites. Exptl. Brain Res.66: 517 – 521.

A transversely sectioned cluster of apical dendrites in layer 4a of the primary visual cortex of a 27 year old monkey. The cytoplasm of dendrites contains evenly spaced microtubules and a few mitochondria, as well as occasional cisternae of endoplasmic reticulum. 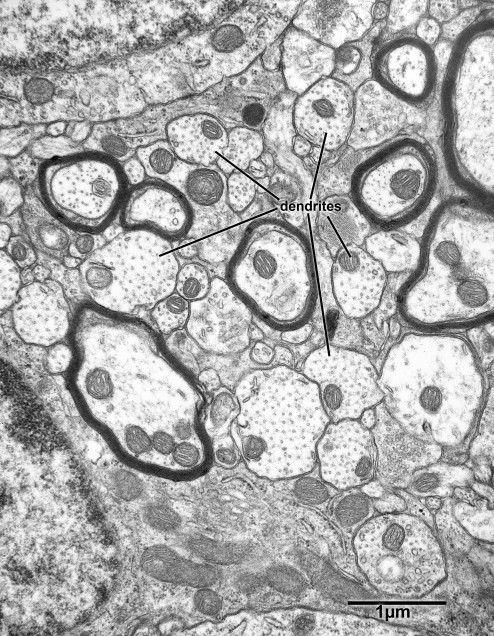 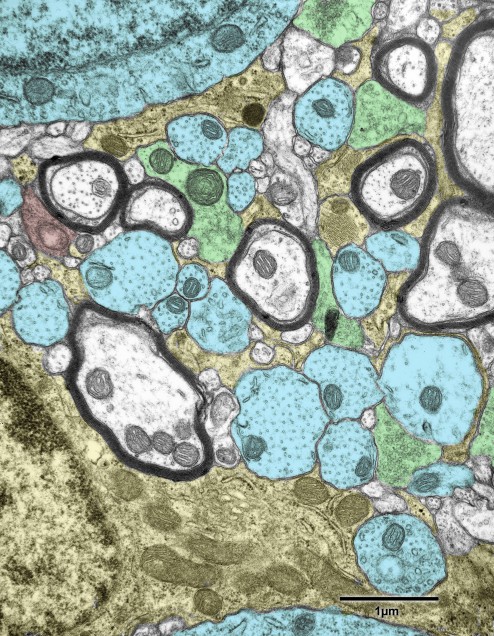 Neuropil in layer 4 of the primary visual cortex in a 35 year old monkey. On the whole dendrites show little change in their morphology with age. But in a few cases, like the one shown here, the cytoplasm appears to have lost its organelles. Note that the dendrite is forming an asymmetric synapse (arrow). 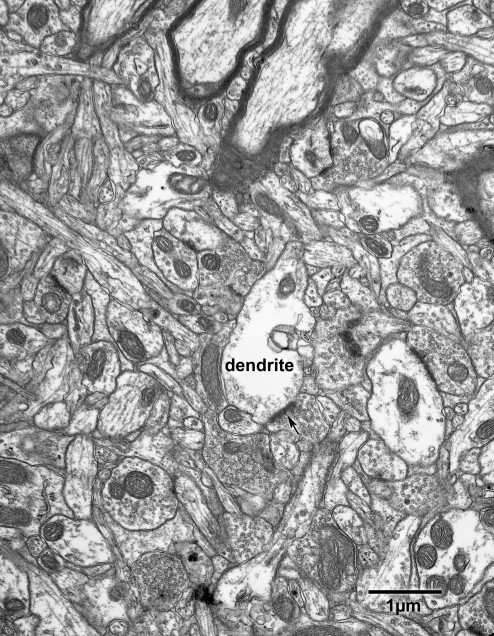 Micrograph from layer 4A of the primary visual cortex of a 35 year old monkey. This is another example of a dendrite that has lost most of its organelles, although an hypertrophied mitochondrion still remains. Note that the dendrite is forming an asymmetric synapse (arrow).  The large dark cell nearby is an oligodendrocyte. 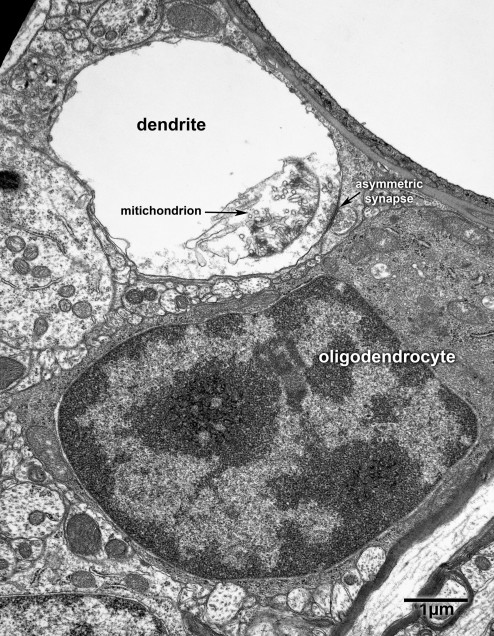 Neuropil in layer 4 of the primary visual cortex of a 35 year old monkey. The neuropil contains a dendrite with a large vacuole in its cytoplasm. At the bottom of the micrograph is the profile of a degenerating myelinated axon. Although the myelin sheath appears to be intact, all that remains of the axon is a large vacuole. 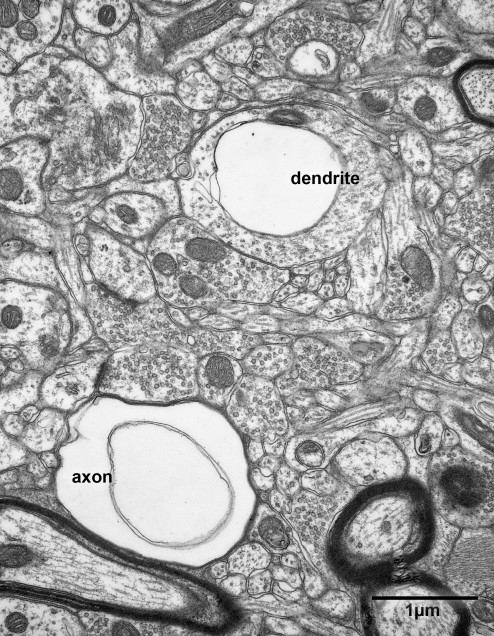 Another micrograph from the neuropil of the visual cortex in layer 4 of a 35 year old monkey. The micrograph shows profiles of three dendrites (dendrite 1 – dendrite 3) which contain a variety of vacuoles in their cytoplasm. Whether this vacuolation is an indication that the dendrites are degenerating is not known. 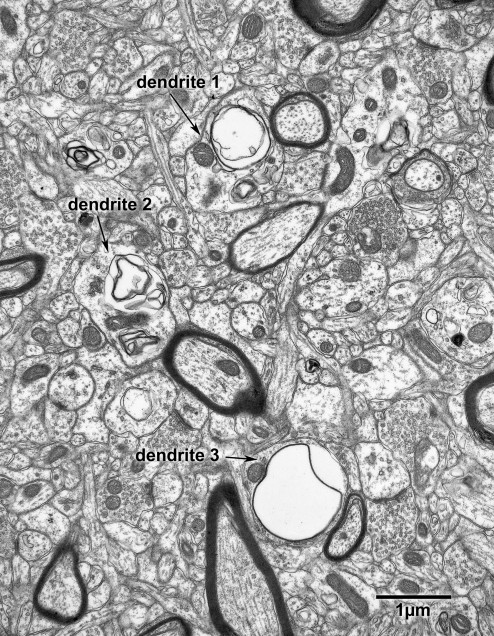 A shrunken and dark dendrite in layer 4 of primary visual cortex in a 25 year old monkey. Even though it is dark and shrunken, the profile can be discerned to be of a dendrite because it is still forming synapses with four axon terminals (arrow). Such dark and shrunken processes are generally considered to arise from neurons that are degenerating, although dark neurons can be produced by poor fixation. In the latter situation there is generally evidence of poor preservation in the surrounding neuropil, which is not the case in this example. 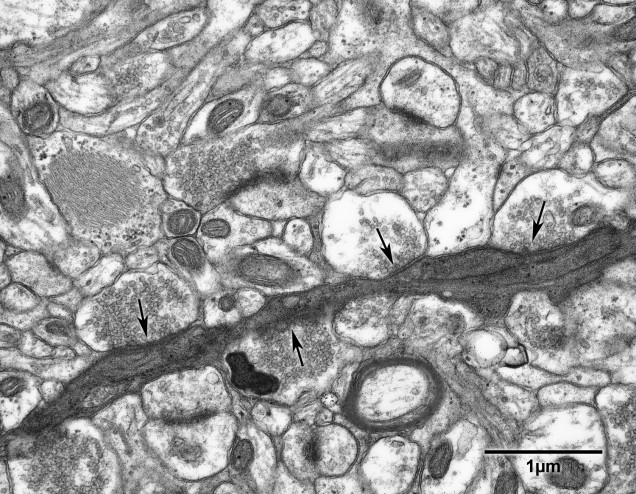 Neuropil in layer 4 of area 46 from a 25 year old monkey. An example of a situation in which the outer laminae of the sheath of a myelinated axon (axon) are bulging into a dendrite.  Other dendrites (dendrites 1-4) also have fragments of myelin sheaths in their cytoplasm, although in these cases the myelinated axons are not apparent. 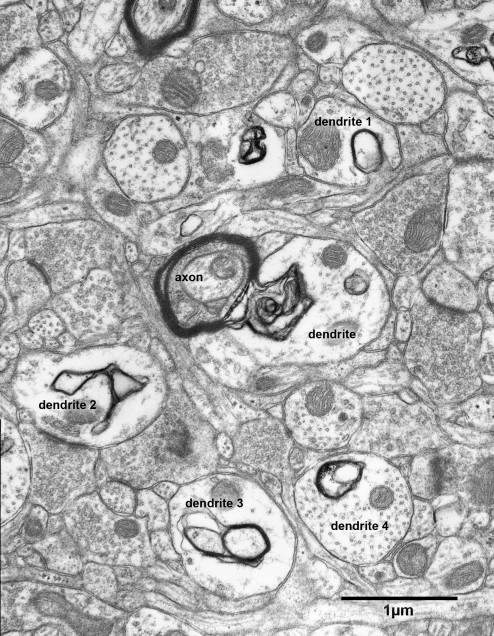