Astrocytes have pale nuclei that are usually regular in shape and their cytoplasm is also pale (Figs. 11.1, 11.1A, 11.2 and 11.2A). The rough ER in these cells consists of isolated and short cisternae and the cytoplasm generally contains some bundles of intermediate filaments, although as in the examples illustrated in Figs. 11.1 and 11.2, the filaments may not always be apparent.  However, in the perikarya of astrocytes in deep cortical layers (Fig. 11.3) and in white matter, bundles of intermediate filaments are very prominent in the cytoplasm. A characteristic of astrocytes is that they have very irregular shapes, with processes that extend into, and mould themselves to, the surrounding neuropil, sometimes partially surrounding synapsing axons, spines and dendrites.

Inclusions are common in the cytoplasm of astrocytes, even in those from the cortices of young monkeys, and most commonly the inclusions have irregular shapes and consist of a mottled dense component,  in which is embedded a paler material (Figs. 11.1, 11.2, 11.4 and 11.5). For the most part, the origins of these inclusions are not known. However, it has been shown that some of these amorphous inclusions label with antibodies to myelin, and some of the dense laminated inclusions obviously resemble broken down myelin sheaths in appearance (Fig. 11.6).

Two astrocytes in the primary visual cortex  of a 5 year old monkey. Astrocytes have pale nuclei, usually with a thin rim of heterochromatin beneath the nuclear envelope. The cytoplasm is also pale and astrocytes have very irregular shapes so that their contours fit the elements in the surrounding neuropil. Even in young monkeys it is common to encounter dark, heterogeneous inclusions in the cytoplasm. 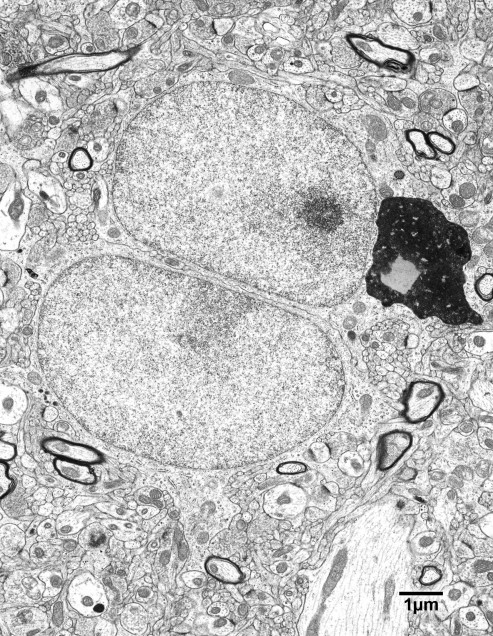 A copy of the electron micrograph shown in Fig. 11.1. In this colored version of the micrograph: astrocytes- yellow; dendrites- blue; axon terminals- green; dendritic spines- grey. 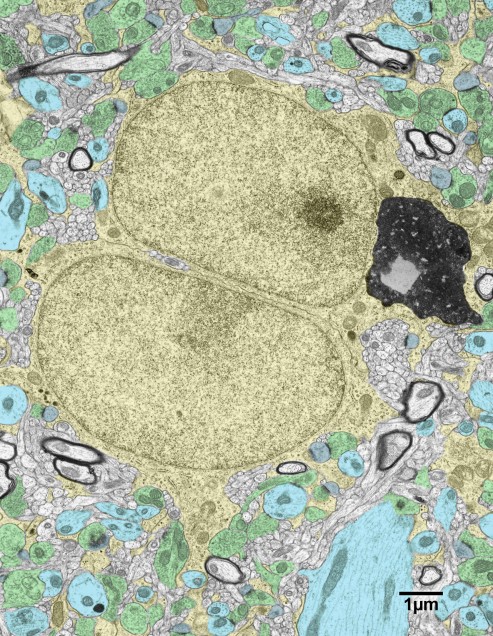 An astrocyte in the upper layers of visual cortex of a 5 year old monkey. There are no filaments obvious in the pale cytoplasm of this cell, which has a large heterogeneous inclusion with dark and pale areas. Note the astrocytic processes in the surrounding neuropil. 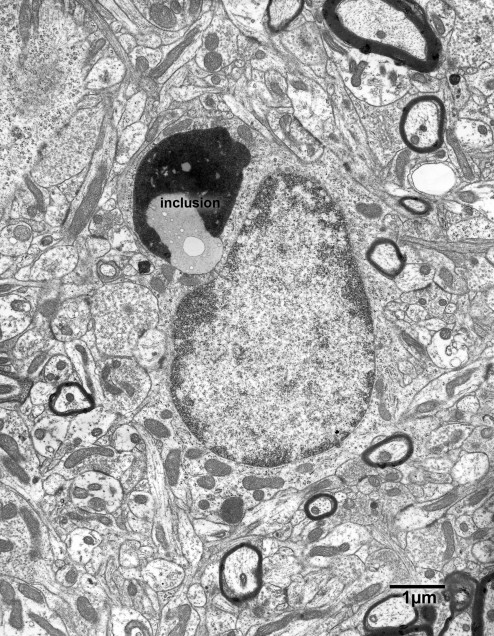 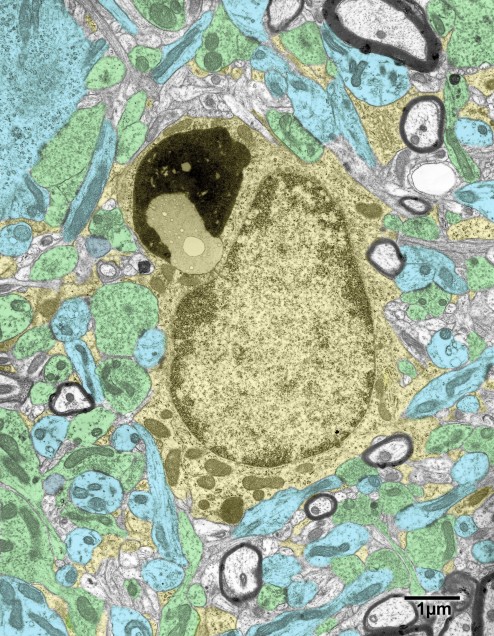 A fibrous astrocyte in layer 6A of the primary visual cortex of a 35 year old monkey. Unlike the astrocytes in the upper layers of the cerebral cortex, ones such as this in the deeper layers of the cortex have numerous bundles of filaments (arrows) in their perikaryal cytoplasm. 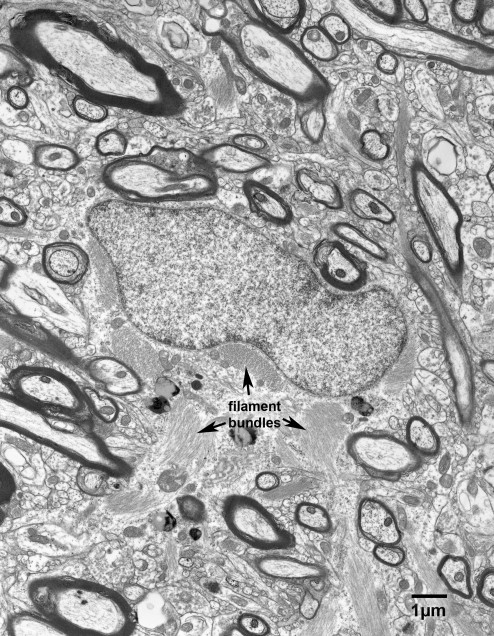 An astrocyte in layer 5 of the visual cortex of a 35 year old monkey. This astrocyte has an irregularly shaped nucleus and has some filaments (arrows) in its cytoplasm, which also contains a large amount of phagocytozed material. The typical amorphous nature of the phagocytozed material gives no clue as to its origin. 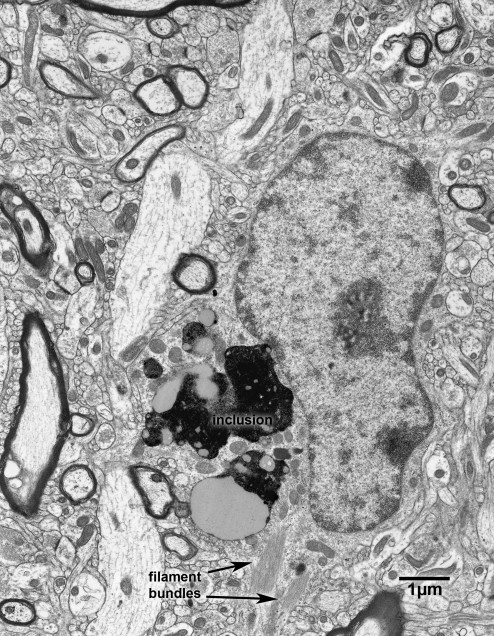 An astrocyte in layer 4 of area 46 in a 29 year old monkey. In addition to the usual amorphous phagocytozed material, this astrocyte has an inclusion which appears to be degenerating myelin. 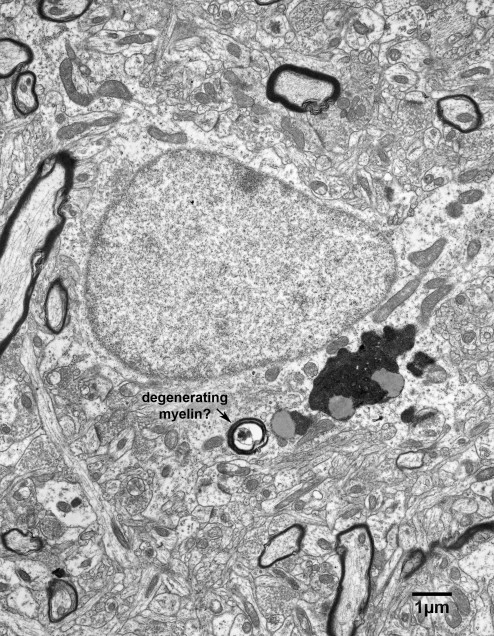 An astrocyte in layer 4 of area 46 of a 25 year old monkey. This astrocyte has several inclusions. One inclusion appears to be a nerve fiber with an axon enclosed by a myelin sheath, and three other inclusions appear to be the remains of degenerating myelin sheaths. 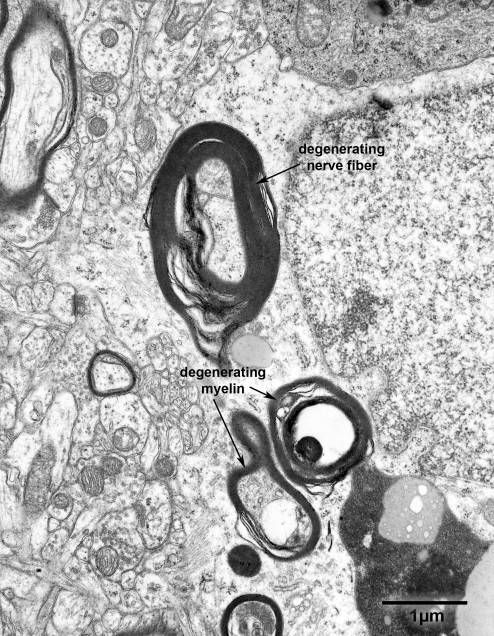