The population of astrocytes is sometimes subdivided into two categories, protoplasmic and fibrous ones, on the basis of the number, or concentration of filaments in their cytoplasm, as well as the location of the cells. Fibrous astrocytes are those present in white matter, while cytoplasmic ones are most common in gray matter.

Satisfactory accounts of the morphology of normal, unreactive microglial cells were not given until the 1970s. One reason for this is that these cells were thought not to exist as a separate entity in the normal brain, but to only appear and to enter the brain under pathological conditions. Another reason is that using the techniques available in early studies these cells were not readily distinguished from oligodendrocytes. In any case it is now agreed that resting microglial cells do exist in the normal brain, making up about 5% of the total population of neuroglia and that with age they become phagocytic.

Myelinating oligodendrocytes in the central nervous system are derived from glial precursors, often referred to as oligodendrocyte precursors, which express two cell surface antigens, proteoglycan NG2 and the platelet-derived growth factor receptor (PDGF aR). In the mature brain, these precursors comprise a fourth type of neuroglial cell population. They make up 4-5% of the neuroglial cell population in the mature brain, and have feature very similar to protoplasmic astrocytes. However, the cytoplasm of these precursors does not contain intermediate astrocytic filaments, and as will be described they have other features that distinguish them from astrocytes.

This low power electron micrograph through the anterior commissure of a 6 year old monkey shows the three classical types of neuroglial cells. Oligodendrocytes, which are the most common neuroglial cell type in white matter, have rounded dark nuclei and dark cytoplasm. Astrocytes have pale, somewhat irregularly shaped nuclei and a pale cytoplasm, while microglial cells have dark nuclei that are often kidney shaped. 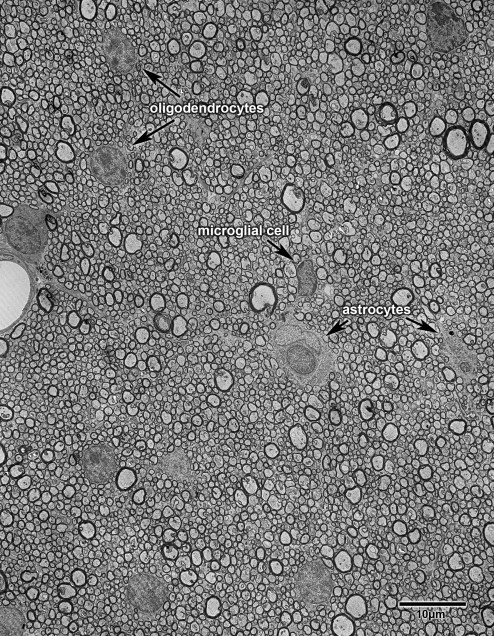