The other type of structural alteration of myelin that is associated with aging is the formation of myelin balloons. Profiles of sheaths with balloons are much less common than those with splits that contain dense cytoplasm. Balloons are bulges that are produced by splitting of the intraperiod line of the sheath, the location where the outer faces of the myelin forming plasma membranes come into apposition.

Balloons come in a range of sizes, from balloons that are about one micron in diameter (Figs. 7.1 and 7.2) to others that can be as can be as large as 10 microns in diameter (Figs. 7.3, 7.4 and 7.4A). The large balloons are visible in the light microscope, and in one micron thick plastic sections stained with toluidine blue they appear as large vacuoles. In the electron microscope balloons generally have round profiles and so it can be assumed that they are spherical. Usually, the contents of the balloons are clear, and so it is assumed that they contain fluid, which is probably under pressure, since in most cases the axon is flattened against one side of the balloon (Figs. 7.1 – 7.5). Like the splits that contain dense cytoplasm, balloons appear to be localized structures (Figs. 7.5 and 7.6). In some profiles of balloons the axon is not evident and it is assumed that in such cases the plane of section passes through one side of the balloon and not through its center.

It needs to be stated that in some examples the alterations displayed by a degenerating sheath are a combination of the above two forms of degeneration, so that some dense cytoplasm is present, generally at the base of a large vacuole or balloon (Fig. 7.6).

A degenerating myelin sheath in layer 4 of area 46 in a 35 year old monkey. The axon of the nerve fiber is intact, but the myelin sheath is bulging out to one side. It is difficult to know if this is a real balloon produced by splitting of the intraperiod line of the sheath or an inclusion of dense cytoplasm that contains a large vacuole. 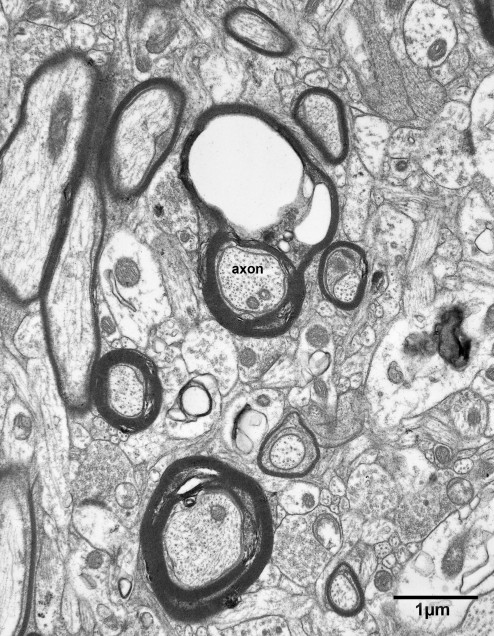 A myelin balloon in the primary visual cortex of a 24 year old monkey. As is typical, the balloon is contained within a split of the myelin sheath. It has a smooth round shape and appears to be fluid filled. The axon is flattened against one side of the sheath. 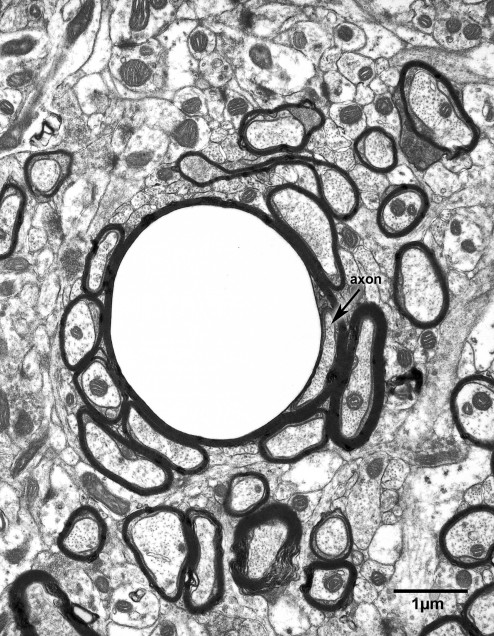 A myelin balloon in the anterior commissure of a 25 year old monkey. The axon is squashed against one side of the sheath. The swelling of the sheath produces some flattening of other nerve fibers that are adjacent to it. 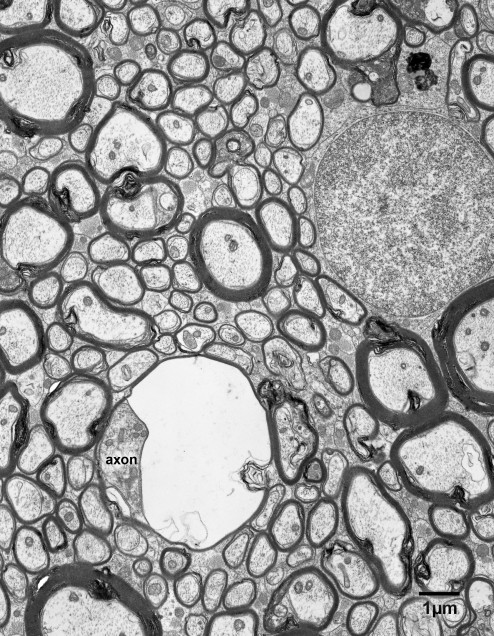 A large myelin balloon in the primary visual cortex of a 24 year old monkey. This balloon has a diameter of 6 microns and is surrounded by a thin myelin sheath. The axon is flattened against one side of the sheath. 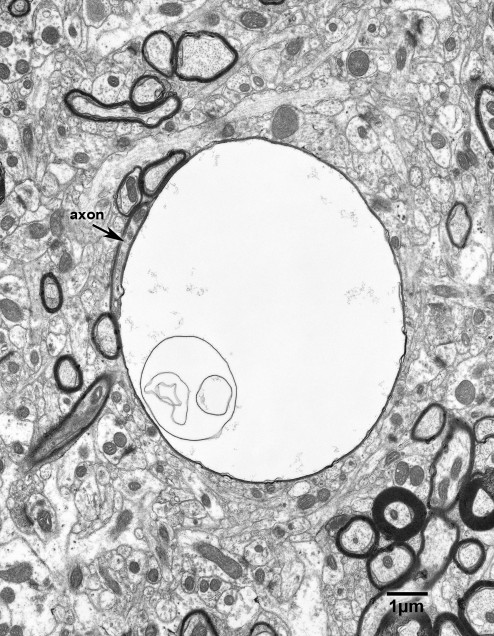 A copy of the above micrograph in which some of the profiles have been colored. Dendrites- blue; axon terminals- green; astrocytes- yellow; dendrites- blue. 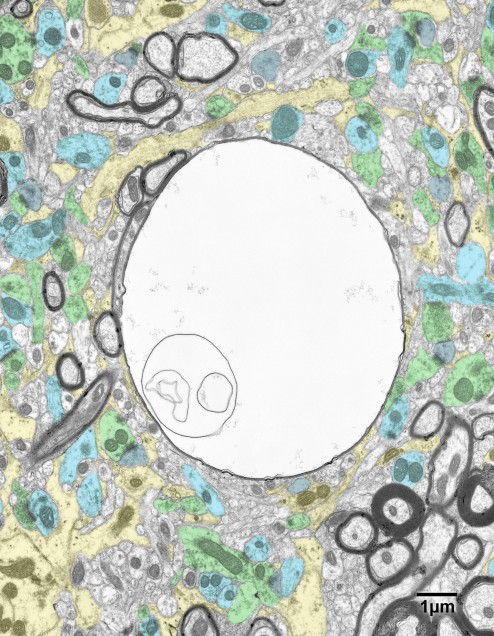 A longitudinally sectioned myelinated axon in layer 4 from area 46 of a 24 year old monkey. The balloon bulges out to one side and it has a round profile, as do balloons extending from transversely sectioned nerve fibers. Thus, it is apparent that the myelin balloons are spherical. 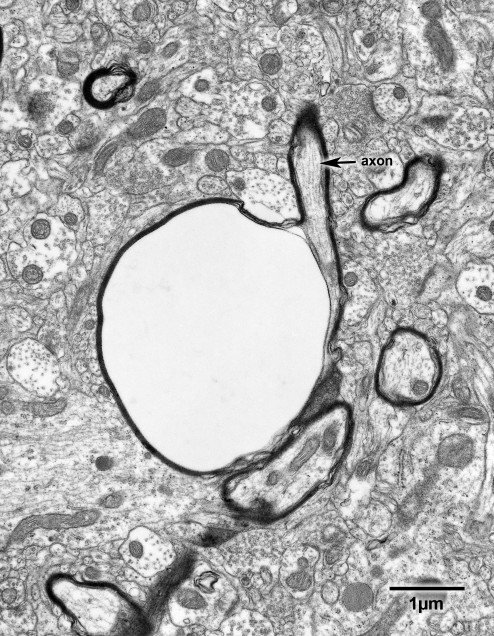 A myelin balloon extending from a longitudinally sectioned axon in layer 6A of the primary visual cortex in a 25 year old monkey. Like the previous examples, the myelin balloon has a smooth round profile, suggesting that its contents are under pressure. This balloon, which is adjacent to a neuron, has a large amount of dense cytoplasm at its base. 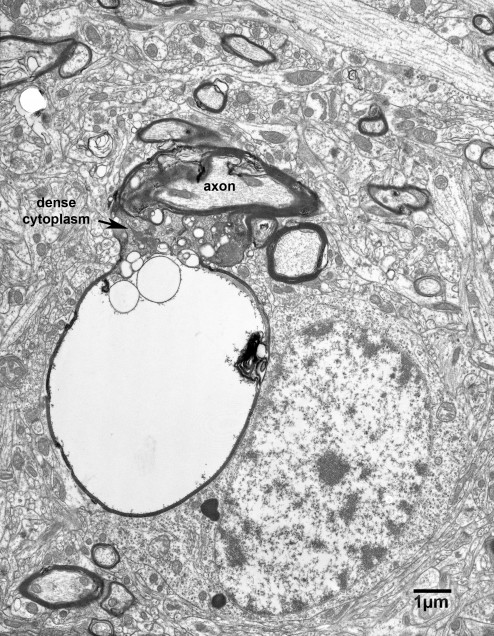