Whether there is a loss of axosomatic synapses with age is not clear since the only study that appears to have been carried out is that of Tigges et al. (1990), who found no loss of axosomatic synapses from the cell bodies of Betz cells in the motor cortex of the rhesus monkey. However, there may be some changes in terminals forming axosomatic synapses, since Soghomonian et al. (2010) found that with age the axon terminals synapsing with the cell bodies of neurons in prefrontal cortex become larger, their mitochondria also enlarge and there is an increase in the number of synaptic vesicles.

Most of the cell bodies of neurons in the cerebral cortex of the monkey show few obvious alterations with age beyond a slight increase in the frequency of lipofuscin granules and this tends to be more apparent in inhibitory neurons (Fig.1.3) than in excitatory ones (Figs. 1.1; Fig. 1.1A; Fig. 1.2). However in large neurons such as the Betz cell of motor cortex and the Meynert cells of visual cortex there is a substantial increase in the frequency of lipofuscin granules (Fig. 1.4). Lipofuscin is known as one of the aging “wear and tear” pigments. It appears to be the product of oxidation of unsaturated fatty acids and may be produced by damage to lysosomes and mitochondria, and in addition to a large lipid content lipofuscin is known to contains sugars and metallic compounds. The accumulation of lipofuscin appears to be the result of an imbalance between formation and disposal mechanisms. Morphologically lipofuscin granules are of various sizes, have irregular shapes and have one or more pale vacuoles that are embedded in darker, granular, heterogeneous matrix (Fig. 1.4). Tigges et al. (1990) found that in the perikarya of Betz cells of monkey, lipofuscin granules first appear at about 5 years of age, and eventually become so numerous that they can displace the nucleus from its usual location in the center of the cell body.

A pyramidal cell in layer 3 of area 46 of prefrontal cortex in a 5 year old monkey. The cell has a pale rounded nucleus surrounded by a cytoplasm in which mitochondria are intermingled with the Nissl bodies. Pyramidal cells are excitatory neurons and have spiny apical and basal dendrites. The apical dendrites extend into layer 1, where the dendrite forms its apical tuft. As is typical of young monkeys, this neuron has few lipofuscin (age pigment) granules in its cytoplasm. Note the astrocyte adjacent to the apical dendrite of the neuron. 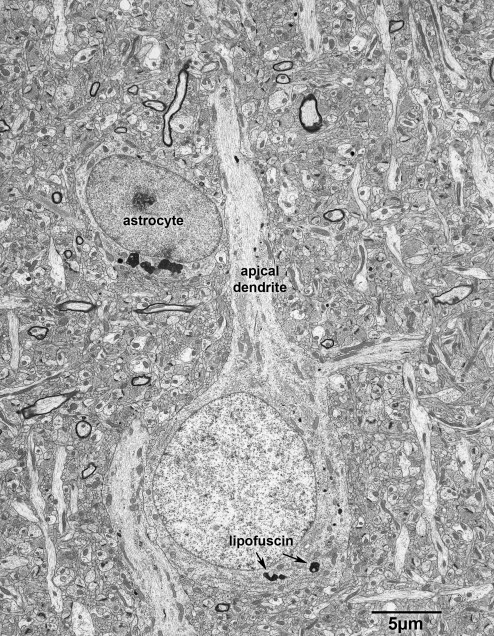 A version of the electron micrograph shown in Fig. 1.1 in which various cellular components have been colored. The colors are as follows: Neuronal body and dendrites- blue; dendritic spines- grey; axon terminals- green; astrocyte cell body and processes- yellow. 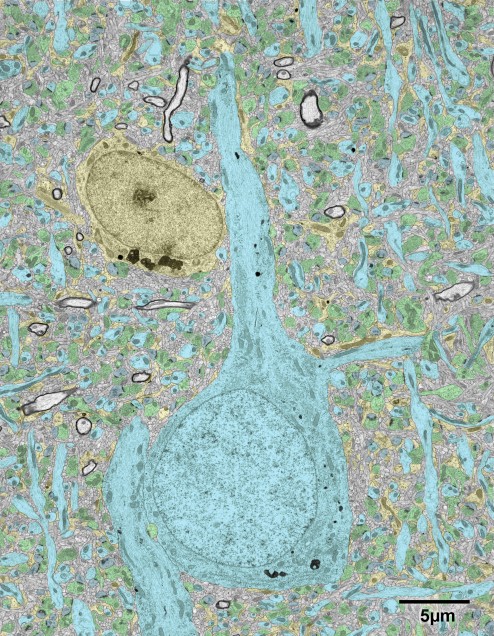 A pyramidal neuron in layer 2/3 of the primary visual cortex of a 35 year old monkey.  Except for the presence of a few lipofuscin granules in its perikaryon, this neuron is similar in appearance to such neurons in younger monkeys. 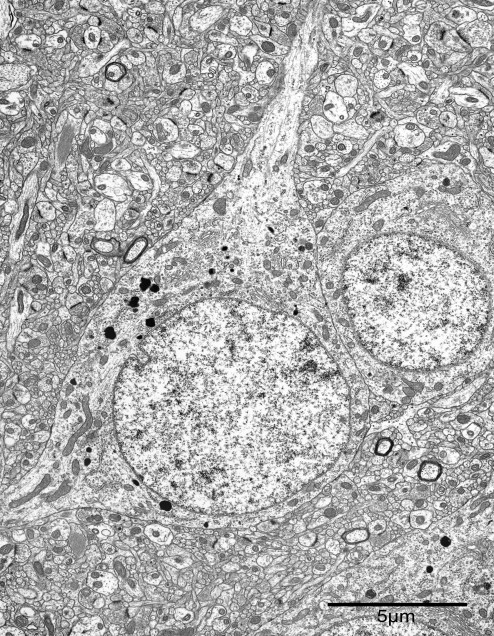 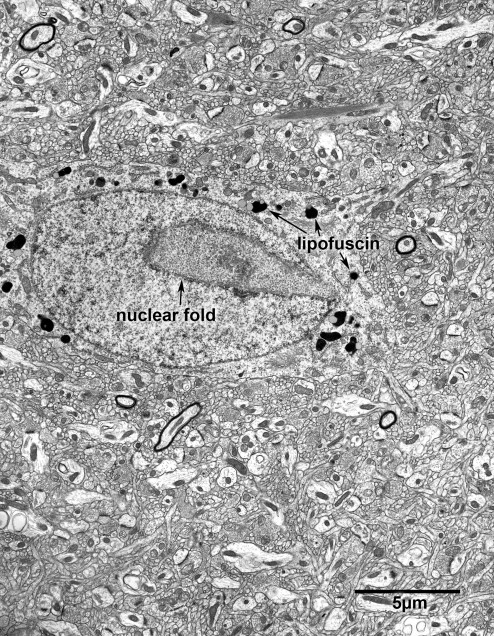 The perikaryon of a Betz cell in motor cortex of a 35 year old monkey. The perikarya of these large neurons come to contain numerous lipofuscin granules as they age. The granules have irregular shapes and have one or more pale vacuoles embedded in a dark matrix that contains even darker granules. 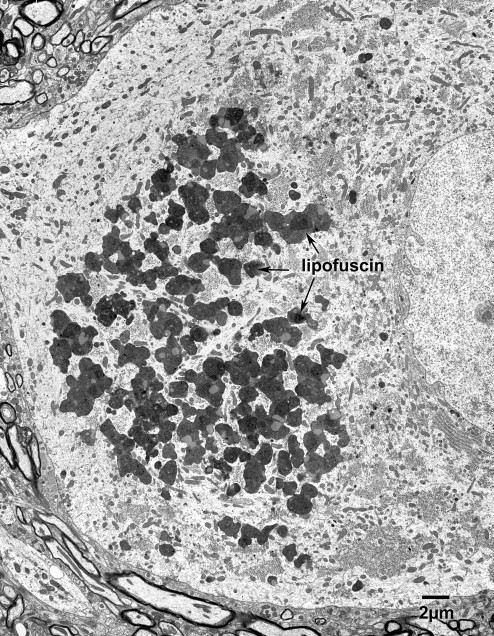