The axons of normal myelinated nerve fibers have a pale axoplasm in which there are both neurofilaments and microtubules, as well as occasional profiles of mitochondria and smooth endoplasm reticulum (Figs. 3.1 , 3.2, 3.3 and Fig. 3.3A). Surrounding the axons are the myelin sheaths, which occur in segmental lengths and are formed by oligodendrocytes.

For descriptive purposes myelin sheaths can be considered to have three zones:
1. Separating adjacent lengths of myelin are the nodes of Ranvier, where the axons are bare. Transverse sections through nodes of Ranvier can be identified by the electron dense undercoating of the axolemma and a cytoplasm that commonly shows an increase in the frequency of profiles of microtubules (Figs. 3.3, Fig. 3.3A, and Fig. 3.4). It is at nodes of Ranvier that myelinated nerve fibers branch (Fig. 3.5).
2. Adjacent to the nodes of Ranvier are the paranodes, where the spiraled lamellae of myelin gradually terminate (Fig. 3.4).
3. Between the paranodes is the extensive intersegmental myelin sheath.

At the ends of the myelin segments are the paranodes, where the myelin sheath gradually becomes thinner as it approaches the node of Ranvier and the spiraled turns of myelin terminate. The inner turns of the spiraled lamellae of myelin terminate first and as they terminate, the major dense line opens up to contain a spiraled tunnel of cytoplasm which interconnects the inner and outer tongues of cytoplasm along the main length of the sheath. In longitudinal sections of the paranode the spiraled tunnel appears as a series of pockets of cytoplasm on each side of the axon (Fig. 3.4, arrows). Here the axolemma and the plasma membrane bounding the inner faces of the pockets of cytoplasm of the sheath come into close apposition so that they are separated by a gap of only 3nm (Figs. 3.6 and 3.7). This junctional complex between the two membranes is very distinctive and makes it very easy to recognize profiles of transverse sections through paranodes.

Transverse section of the anterior commissure of a 16 year old monkey. In younger monkeys the myelin sheaths are compact and do not display significant distortion. Most of the profiles are sections through the internodal lengths of myelin, where there is a gap between the axolemma and the membrane on the inner face of the myelin sheath. At paranodes (paranodes: arrows) these two membranes come close together to form a seven layered complex, and at paranodes the thickness of the myelin sheath depends upon how close to the node of Ranvier the section is taken. 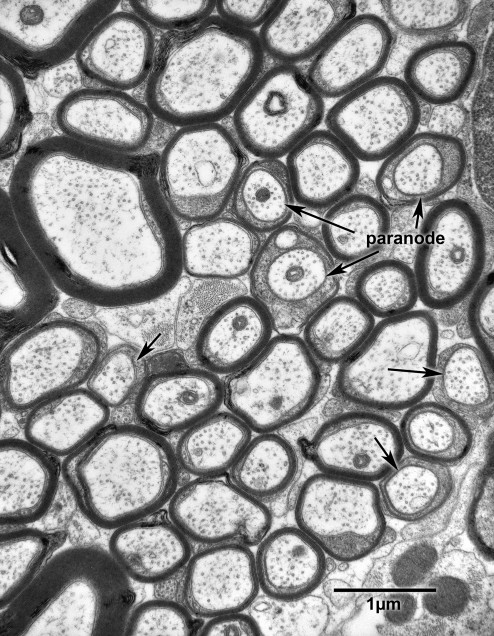 Transverse section through a bundle of myelinated nerve fibers in the deep layers of primary visual cortex in a 25 year old monkey. As in the previous figure, the myelin sheaths are compact and sections through paranodes (paranodes: arrows) can be recognized by the close proximity of the axolemma and the plasma membrane on the inside of the myelin sheath. 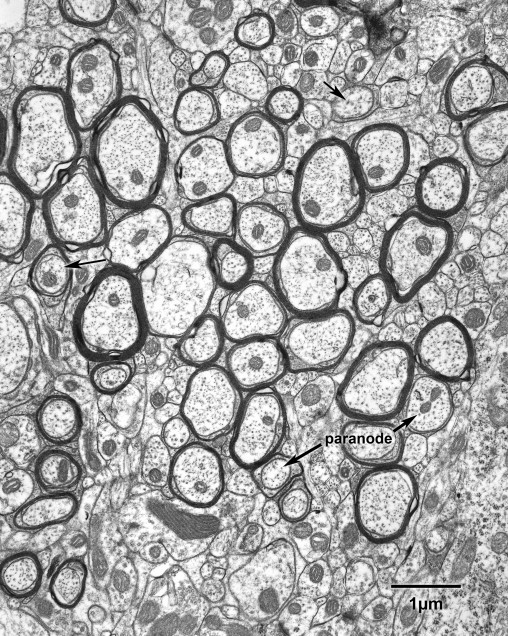 Transverse section through the corpus callosum of a 6 year old monkey. At this higher magnification the lamellae of the myelin sheaths are visible and in some cases the inner and outer tongues of cytoplasm of the sheaths are apparent. When these myelin sheaths are carefully examined and the spiraling of the lamellae followed from where the lamellae begins on the inside of the sheath at the inner cytoplasm tongue process and ends at the outer tongue process, it will be seen that in some cases the spiraling is clockwise and in other cases it is anticlockwise.  Two paranodes are labeled, as well as a profile of a nerve fiber in which the plane of section passes through the junction between the paranode and the node. Myelin sheaths of the central nervous system are difficult to preserve and so splitting is not uncommon, especially in the thicker sheaths. 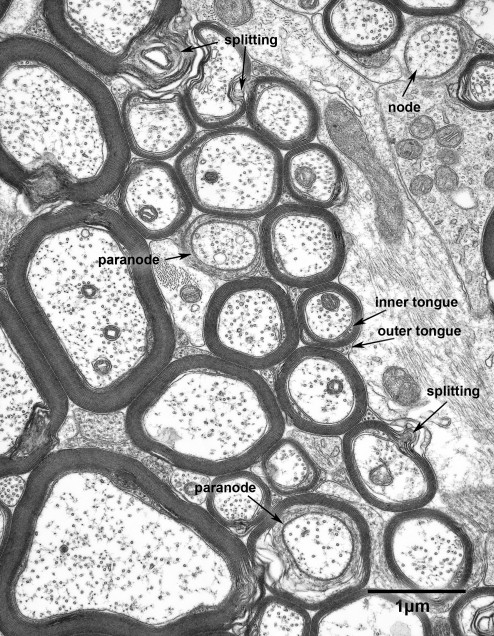 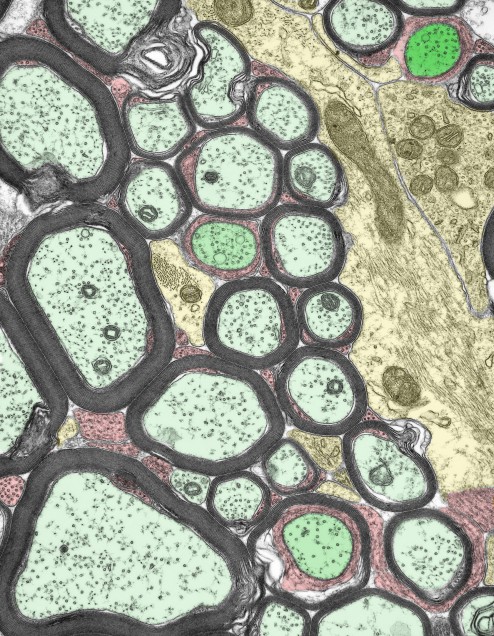 A longitudinal section though a node of Ranvier of the myelinated nerve fiber in layer 4C of the primary visual cortex from a 27 year old monkey. At the node  the axolemma has a dense undercoating. On each side of the node are the paranodes, where the myelin lamellae gradually terminate in a helical fashion, the inner lamellae terminating first. As the lamellae terminate the dense line of the sheath opens up to enclose a helix of cytoplasm, which in longitudinal sections appears as a series of pockets (arrows) on each side of the axon. As already noted, at paranodes the axolemma and the plasma membrane of the sheath come close together to form a junction. 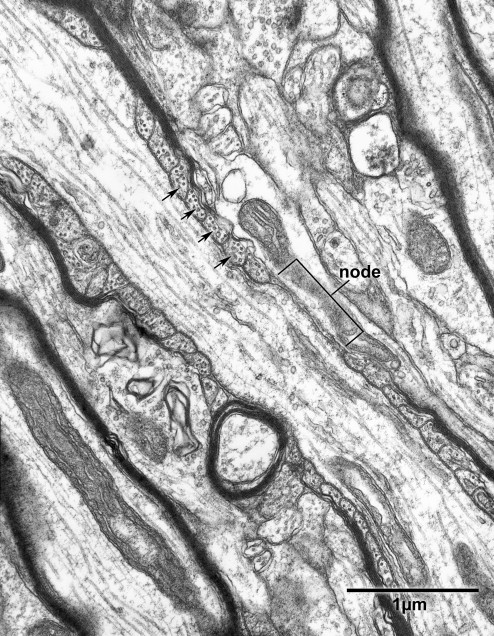 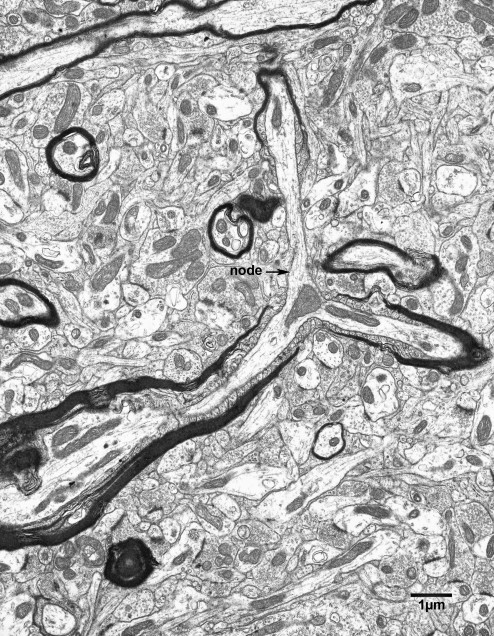 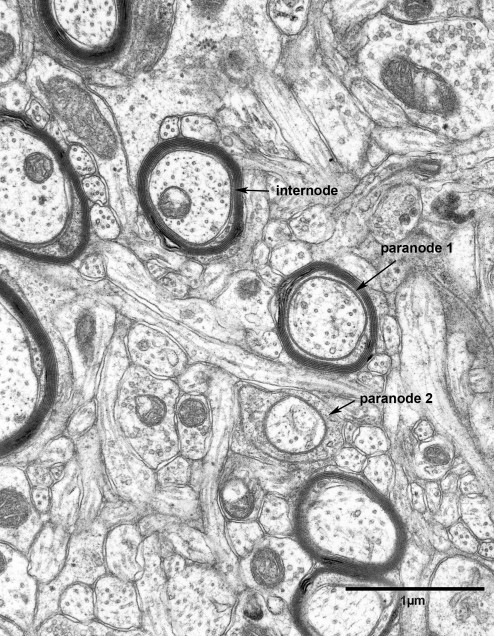 A myelinated nerve fiber in area 46 of a 25 year old monkey. The nerve fiber is sectioned at the level of the paranode as shown by the seven layered junction formed between the axolemma and the plasma membrane on the inside of the sheath (arrows). 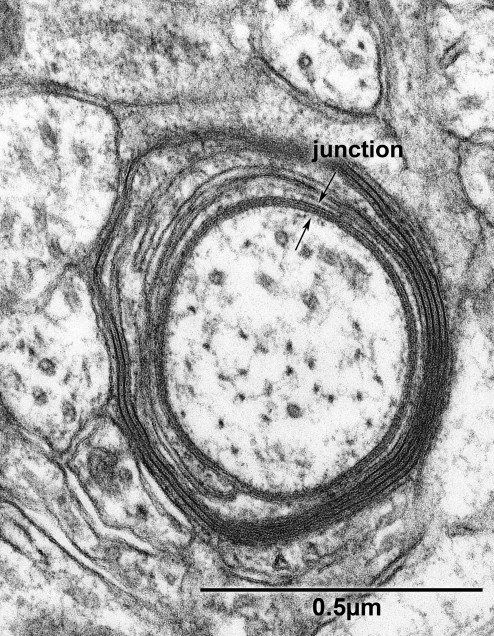