Once again, we are mourning an act of horrific gun violence in the US. Yesterday, a gunman killed 17 people and injured at least a dozen others at a high school in Parkland, Florida. He used an AR-15 semi-automatic rifle, the same weapon used in many other high-profile mass shootings, including Sandy Hook. We featured this gun on the cover of the 2016 edition of SPH This Year; an acknowledgment of its deleterious effect on public health. The weapon has been widely available in the United States ever since Congress allowed the federal assault weapons ban to expire in 2004.

After gun violence tragedies, it is common to ask “why?” When we in public health hear this question, it is our responsibility to be clear about the answer. Gun violence happens because our politics enables it. By not renewing the assault weapons ban, by resisting nearly every gun safety measure that has been put before them, political actors—primarily Republicans—have made it inevitable that troubled people like yesterday’s shooter will have easy access to military-grade weapons.

We today rerun a version of a Dean’s Note summarizing how gun violence shapes health in the US. We hope to never have to run it again; we know, without meaningful change at the federal level, we likely will. Given this reality, the work of studying this problem, of resisting numbness, of always being clear about the true cause of this crisis, remains, I think, more important than ever.

The extraordinary prevalence of firearm-related violence in the US stands in harsh contrast with our peer nations. Between the Columbine High School shooting on April 20, 1999, and December 31, 2012, for example, there were 66 school shootings in the world, of which 50 occurred in the US. In 2003, the US had the highest rate of firearm homicide (6.9 times higher than others) and firearm suicide (5.8 times higher than others) among 23 populous high-income nations.

The US clearly has a long and complicated relationship with firearms, and, constitutional rights aside, there are abundant organizations and large numbers of high-profile arguments on the side of unfettered firearm availability in this country. But it seems, for a moment, worthwhile to set aside the rights argument, and ask a simpler question: what is the role of public health in an issue that has clear public health consequences?

While arguments around the rights to gun ownership often center around self-protection from other firearms, the evidence is overwhelmingly clear that this argument is not supported by the data. Extant studies on the risks of firearm availability on firearm mortality have provided clear evidence of an increased risk of both homicide and suicide. A recent meta-analysis of 16 observational studies, conducted mostly in the US, estimated that firearm accessibility was associated with an odds ratio of 3.24 for suicide and 2.0 for homicide [see figure 1], with women at particularly high risk of homicide victimization (odds ratio 2.84) compared to men (odds ratio 1.32). In the case of firearm suicide, adolescents appear to be at particularly high risk, relative to adults. A 2013 study led by SPH researcher Michael Siegel found that US states with higher estimated rates of gun ownership experienced a higher number of firearms-related homicides. That study, covering 30 years (1981-2010), found a robust correlation between estimated levels of gun ownership and actual gun homicides at the state level, even when controlling for factors typically associated with homicides. 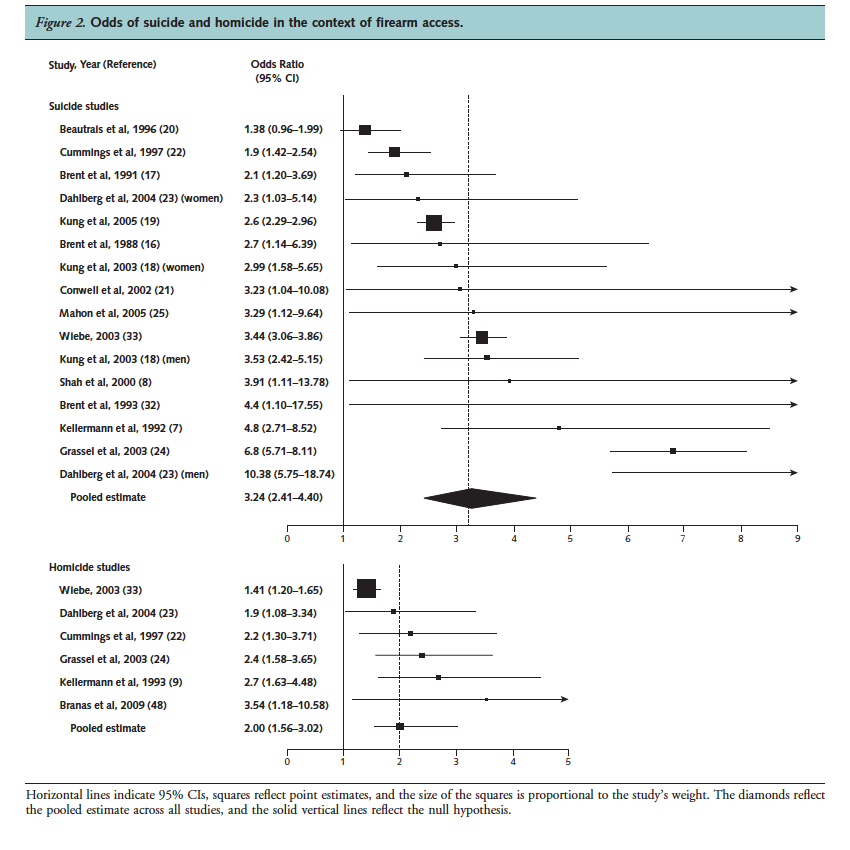 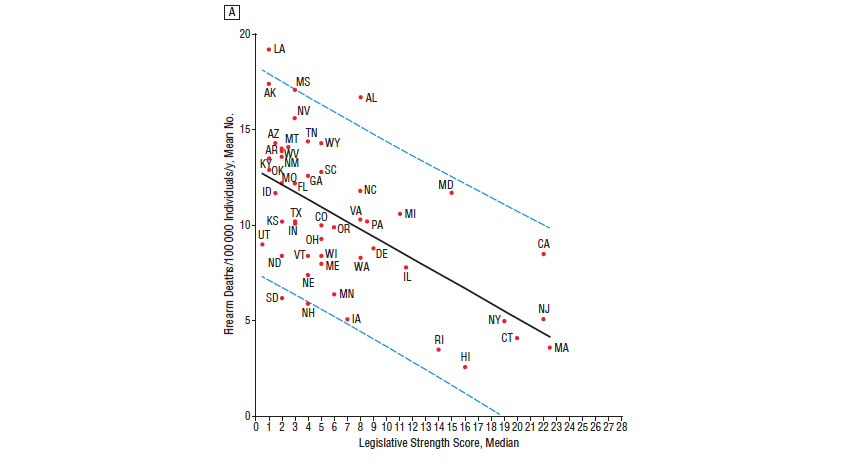 These studies are roundly supportive of causal relationships between firearm availability and firearm mortality, and conversely, of firearm legislation as protective against firearm deaths. Some concern about “reverse-causation” explaining the relationship between firearm availability and firearm homicide has been raised, suggesting that gun availability increases as a reaction to rising homicide rates or personal threat. However, while some studies indicate that higher homicide rates may precede higher gun ownership, this bias is unlikely to explain away a majority of the observed effect. In particular, it would likely not account for women and children—those most frequently affected by firearm homicide. Importantly, by contrast, the literature on firearms and firearm-related suicide is not subject to the same potential of reverse causation, but does suffer from a dearth of longitudinal studies.

Despite the clear evidence that guns pose a threat to health, the public health community has been unable to get traction as an effective voice on this issue. Unfortunately, instead of quality scholarship and policy efforts to map and respond to the risks of guns, we have seen the silencing of gun researchers, health practitioners, and policymakers intent on addressing these problems. Actions by Congress fueled by the National Rifle Association (NRA) in 1996 effectively defunded federal gun research, a still extant legacy, and to date, the CDC website lacks materials on prevention of gun-related injury or violence. While translatable lessons from successful public health campaigns on smoking, unintentional poisonings, and car safety abound, the political will necessary to implement and test them has been absent and under unremitting attack.

In Florida in 2011, physicians and other health practitioners have been subject to legislation that, in effect, restricts discussion with patients on guns or gun safety (HB 155), legislation that has been challenged but recently upheld in court. Similar efforts have been pushed in other states. Finally, while manufacturers of a wide range of products including cars, medications, and medical devices are subject to regulation and legal action that hold them accountable for product safety risks, gun manufacturers appear to be immune to such forces. Indeed, perhaps that lack of accountability stems from the fact that guns like the Bushmaster AR-15 semi-automatic rifle, used in the Sandy Hook massacre, are designed explicitly to “deliver maximum carnage with extreme efficiency” and have no place in civilian settings, as the parents of several victims of Sandy Hook argue in their current lawsuit against Bushmaster Firearms. While the outcome of that case is pending, the broader question of how to break down the social and political blockades that have prevented a public health approach to guns remains pressing and unanswered.

While acknowledging the broader issues around the balance of rights and privileges, and with a nod to the challenges embedded in thinking about paternalism in public health (subject of a future comment), it seems to me that it falls to public health to be a clear voice against the legal widespread availability of a pathogen, firearms, that other peer nations have long conquered.

Would we tolerate such lapses in our legal response to other prevalent health challenges? Imagine for a moment that, because of emphatically articulated rights-based arguments, the US remained alone among peer countries in not having automobile seatbelt laws, and that our automobile death rate was seven-fold greater than that of Canada. Would that be tolerable?

This then comes back to the question posed at the beginning of this commentary. What is the role of public health in this discussion? In many ways, I worry that the voice of academic public health has been far too quiet on this issue, simply because the typical mechanisms that support our scholarship—extramural funding chief among them—have not been conducive and, as noted above, actively discouraging of this work. This suggests, then, that it falls to academic public health to organize itself in a way that will allow us to be a clear and compelling voice on the issue. It argues for an active role in translating scholarship, and a full engagement with the public conversation around this issue.

The ultimate solution to the firearm epidemic does not lie with the doctors who treat firearm victims, nor with the community-based providers who try to keep youths away from guns. It lies rather with policymakers and legislators. An activist academic public health community needs to play a central role in engaging this constituency through clear and compelling data-driven research and scholarship. It is only then that we have any hope of turning the tide on what is truly a preventable epidemic.