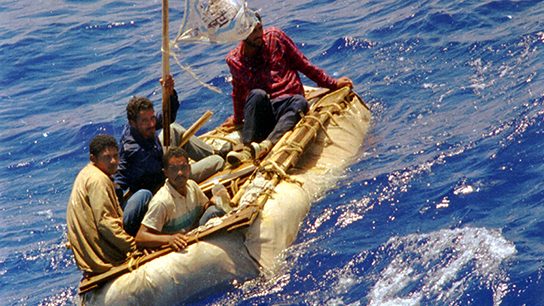 In the article, titled “Muddying the waters: migration management in the global commons,” Lori and Schilde explore the Liberal strategies of exclusion as well as the contradictions between universal liberal values enshrined in democracies and more exclusionary practices towards migrants. The two take a focused look at migrant interdiction in international waters conducted by the United States, Australia, and Europe. In doing so, they argue that maritime migrant interdiction by liberal states such as these in the global commons is the result of domestic tensions between a state’s security institutions trying to fulfill their protection mandates and the liberal domestic institutions upholding rights it grants to individuals.

Advanced liberal democratic states interdict migrants on the High Seas global commons. Why have liberal states engaged in this practice over the past four decades? Deterrence and humanitarian rescue explain part of this puzzle, but they are insufficient for understanding the patterns and justifications for migrant interdiction on the High Seas…We argue that liberal states use the regulatory gray zones of the High Seas to ‘muddy the waters’ in order to advance their security interests. States with the highest domestic refugee protections have incentives to circumvent their own obligations, which vary over time with changes to domestic asylum laws.

The full article can be read on International Relations‘ website.

Kaija E. Schilde is an Associate Professor at the Boston University Pardee School of Global Studies. Her primary research interests involve the political economy of security and transatlantic security. Her book, The Political Economy of European Security (Cambridge University Press, 2017) investigates the state-society relations between the EU and interest groups, with a particular focus on security and defense institutions, industries, and markets. Learn more about Professor Schilde on her faculty profile.