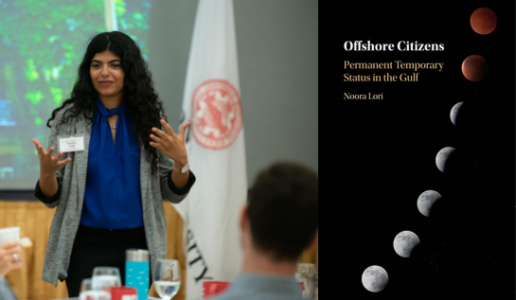 In Offshore Citizens, Lori shows that not all populations are fully included or expelled by a state; they can be suspended in limbo – residing in a territory for protracted periods without accruing citizenship rights.

While the dominant theories of citizenship tend to recognize clear distinctions between citizens and aliens, Lori’s new book explores why ruling elites might say neither ‘yes’ nor ‘no’, but ‘wait’ when it comes to extending citizenship to certain groups,

Lori presents an in-depth case study of the United Arab Emirates using new archival sources and extensive interviews to show how temporary residency can be transformed into a permanent legal status, through visa renewals and the postponement of naturalization cases. In the UAE, temporary residency was also codified into a formal citizenship status through the outsourcing of passports from the Union of Comoros, allowing elites to effectively reclassify minorities into foreign residents.

“I am delighted to see so many years of work come into fruition and grateful to my colleagues and students at the Pardee School for supporting this work,” Lori said.