Longman on Memory and Justice in Post-Genocide Rwanda 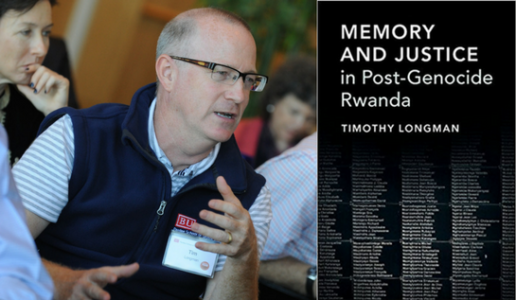 Timothy Longman, Associate Professor of International Relations and Political Science at the Frederick S. Pardee School of Global Studies at Boston University and Director of the Institute on Culture, Religion and World Affairs (CURA), was recently interviewed about his latest book  Memory and Justice in Post-Genocide Rwanda (Cambridge University Press, July 2017).

Longman was interviewed for a January 31, 2018 article in BU Today entitled “Telling the Truth about Rwanda.”

Timothy Longman doesn’t go back to Rwanda anymore. Too much of his work has displeased the regime.

“I don’t feel safe to go,” says Longman, director of BU’s Institute on Culture, Religion, and World Affairs (CURA) and a former director of the Rwanda field office of Human Rights Watch. “It’s far too easy for someone to have a tragic car crash or eat something that was ‘spoiled.’ And I have been singled out by the foreign minister as someone she does not like.”

Longman’s new book, Memory and Justice in Post-Genocide Rwanda (Cambridge University Press, 2017), continues his examination of that country’s long recovery from the genocidal tribal wars that killed more than 500,000 people in 1994. His earlier book Christianity and Genocide in Rwanda (Cambridge University Press, 2010) looks at how the leaders of Christian churches supported the genocide to secure their own power. Rwanda has been rightly praised for its successes, but its recovery has not been without cost, and life there now is extremely hard for most, says the Pardee School of Global Studies and College of Arts & Sciences professor of political science and of international relations.

In the book, Longman argues that despite good intentions and important innovations, Rwanda’s authoritarian political context has hindered the ability of transnational justice to bring the radical social and political transformations that its advocates hoped.