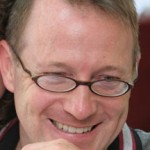 Professor Longman is a professor of political science and international relations and is the Director of the Institute on Culture, Religion, and World Affairs (CURA) and the Director ad interim of the African Studies Center in the Pardee School. His research focuses on state-society relations in Africa, looking in particular at human rights, transitional justice, religion and politics, gender and politics, and the politics of race and ethnicity. He has published two books with Cambridge University Press, Memory and Justice in Post-Genocide Rwanda (2017) and Christianity and Genocide in Rwanda (2010). He is currently working on a book comparing church-state relations throughout Africa. He served for eight years as the director of BU’s African Studies Center.

Professor David Mayers recently published an article in the journal Diplomacy and...