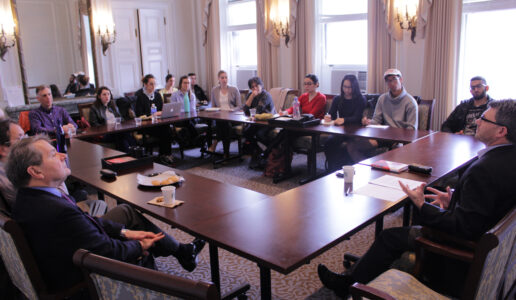 The Latin American Studies Program, an affiliated program of the The Frederick S. Pardee School of Global Studies, hosted a talk by Kevin Gallagher, Professor of Global Development Policy, on his new book, The China Triangle: Latin America’s China Boom and the Fate of the Washington Consensus.

The China Triangle provides one of the first accounts of post-“China boom” Latin America, and focuses on Latin America’s development challenges in a historical context.

Prof. Gallagher discussed how Latin America turned to China as a main source for the region’s economic growth after the financial crisis of 2008 ravaged the economies of the United States and Europe.

“Repivoting their economies to China helped to get a faster growth rate than anything we’ve been able to offer for 30 years,” Gallagher said “But at the end of the day they didn’t invest the proceeds of it into the proper ways to transform their economy into one that isn’t so reliable on boom and bust commodity cycles.”

“The problem is Latin America doesn’t have a plan for China’s plan,” Gallagher said. “Latin America’s China plans are all bilateral, and it’s almost every time a presidential pet project to build a road to a mine in the Amazon–nothing that is going to transform the abilities of the economies to be innovative or to transform into services and manufacturing. There is no regional forum to have a conversation about a regional infrastructure plan.”