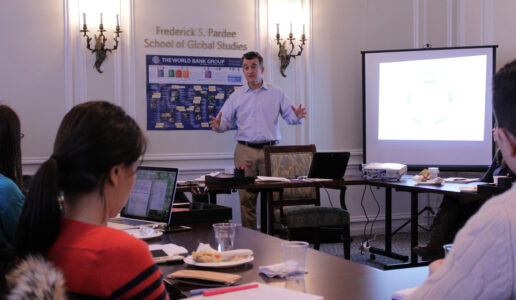 The Global Economic Governance Initiative (GEGI) hosted a discussion on Bretton Woods and the early stages of the new international financial architecture on February 19, 2016 at the  Frederick S. Pardee School of Global Studies.

Rogerio Studart, Senior Visiting Fellow at the Pardee School, lead the discussion entitled “Reconstruction and Realpolitik,” examining the operation and the role of the World Bank since the organization’s creation.

Studart began by examining the circumstances surrounding the creation of the World Bank at the 1944 Bretton Woods Conference, where the focus was helping to fund reconstruction at the close of World War II.

Studart pointed out that the mandates of the World Bank have shifted since the creation of the organization along with changing geopolitics .

“I think that if you look at any of the institutions that are creating the multilateral world and international governance that we have, it has to do with larger geopolitics,” Studart said. “Those institutions are really evolving beings. They evolve according to the geopolitics that put pressure on them. It goes far beyond how it operates and how it is structured. It goes into the creation of mandates.”

Studart said the appointment of the current President of the World Bank, Jim Kim, proved to be a groundbreaking moment for the organization, as Kim is the first President whose background deals more with health issues in developing countries than with finance or politics.

“Jim Kim is exceptional because of the situation that was created through the selection of the President that basically pushed the United States to present a candidate that would break with this tradition,” Studart said. “Most likely the person succeeding Jim Kim if the World Bank continues like this, if it is an American citizen, it will go back into the old tradition.”