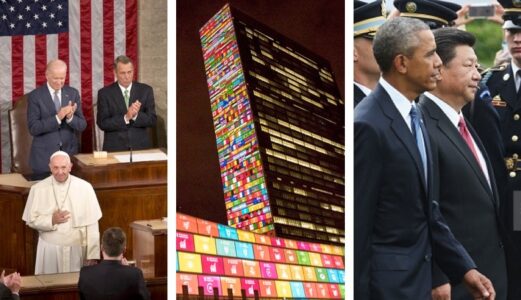 It seemed like the whole world was in the U.S. this week. World leaders from just about everywhere were visiting. And as always, the faculty of the Frederick S. Pardee School of Global Studies at Boston University are here to help decode the impact.

Pope Francis has been electrifying the U.S. on his first American tour, including the first-ever speech by a Pontiff to the U.S. Congress, and then to world leaders gathered in the United Nations. In both Washington and New York, his path crossed that of Chinese President Xi Jinping, who has been in the U.S. for a state visit and for a United Nations Summit that brings more than one hundred heads of state and government to New York. The UN Summit marks the 70th anniversary of the United Nations and adopts the far-reaching Sustainable Development Goals (SDG) as a new framework for global development.

We asked a few professors affiliated with the Pardee School for their take on these visits and the news around them. Here are some of their views.

Pope Francis’ visit to the US will have resonance in current debates about immigration. His affirmation of being “the son of an immigrant family” recalls the shared experiences and common struggles of immigrants in the US and Argentina throughout the centuries.  The immigrant is a powerful image in the national imaginaries of both countries, and it is now politically reactivated with the encounter between President Obama and the Pope. The Pope’s statement  on immigration counteracts those political views  endorsing  mass deportation and building walls. On the other hand, the Pope’s intention to canonize Franciscan friar Junipero Serra, has raised concern among Native Americans and Indigenous movements across the American continent, since Serra’s canonization is also a reminder of  Native Americans’  tragic history of  conquest and forced conversion.

I expect to see a limited agreement on cyber attacks, but no movement at all on cyberhacking.  Xi’s blanket denial that China engages in cybertheft of intellectual property makes progress on that important economic issue impossible.

I also expect to see some substantive progress on the US-China Bilateral Investment Treaty (BIT).  It will not be feasible to reach agreement on the final form of the BIT at this visit, or probably even by the end of 2016, but there seems to be a concerted effort on both sides to narrow the differences.  Two issues in particular will need to be addressed over time:  reduction of China’s negative list of industries that will be exempted from opening to US investors, and some sort of assurance to Chinese investors that the US government will not use national security legislation to block their acquisition of tech companies and other potentially controversial assets.

Professor Joseph Fewsmith
(From his radio interview with NPR)

This is going to be an extremely interesting summit. There are a number of issues on the agenda, including human rights – 200 human rights lawyers have been interrogated in China. Currently the U. S. – China relationship is full of tension – there are issues in the South China Sea, and the issue of cyber security is a prominent one. It’s going to be an extremely tough meeting.

On the UN Summit and SDGs:

Setting global goals can be crucial to galvanizing action. But an agenda centered on 17 SDGs runs the danger of being too general. A more targeted approach would provide clearer guidance and make it easier to oversee implementation of the goals and adjust efforts as needs change in the future.

Also, settings high-level goals is only a first step – the hard work around governance starts now as countries move forward with implementing the SDGs. Making progress on these broad goals will require a level of focus and coordination between governments and other actors in society that we have yet to see.

The Millennium Development Goal (MDG) agenda has played an important role in structuring Africa’s developmental successes over the last 15 years. The one weakness of the MDG framework, particularly in an African context, was its inattention to human rights, rule of law, and accountable government– that is, to politics. The Sustainable Development Goals (SDGs) appear to take these issues more seriously, which bodes well for how African governments will organize developmental processes over the next two decades.

Dean Adil Najam
(Based on comments during a Live Q&A with The Guardian).

OK, we want poverty reduced. Good. But what is our strategy?

We set a goal for the poor to stop being poor! Then we hold the poor accountable for it. Its now the poor country’s responsibility to meet the goal to stop being poor! Really, you think if the poor could meet that goal they would not have met it already? Where is the goal for the rich? The absurdity of making the poor responsible to reduce poverty and the sick responsible for reducing disease is not just a cruel joke, it is really an abdication of responsibility by the rest of us.