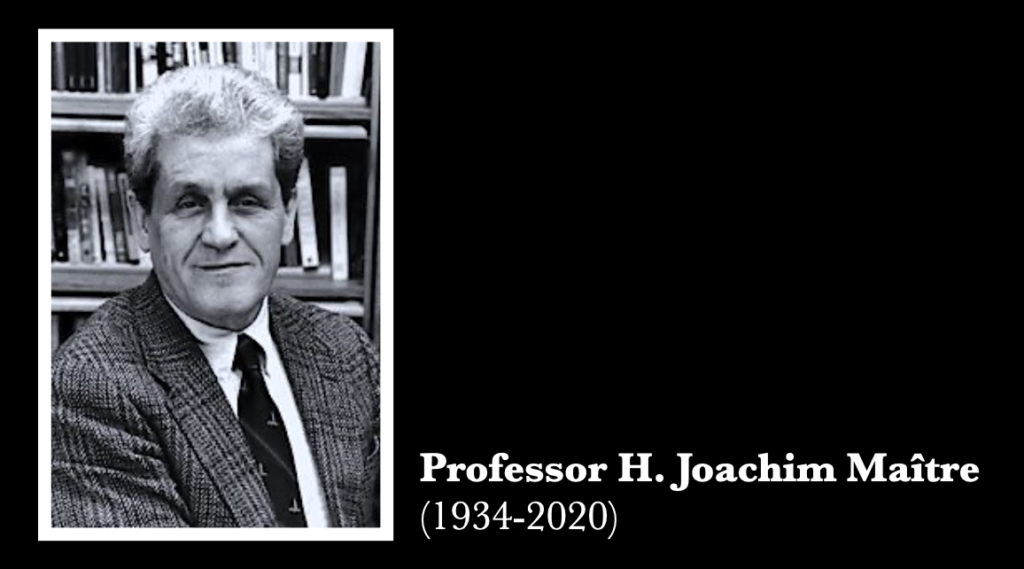 Maître taught at Boston University from 1983 until his retirement in 2013, teaching in both the Department of International Relations – now the Pardee School – and the Department of Journalism in the College of Communication. He served as director of Boston University’s Division of Military Education and founded the Center for Defense Journalism. He was a member of the Mont Pelerin Society, the Philadelphia Society, the PEN American Center, and a lifetime member of the Professional Ski Instructors of America.

An obituary published in the Boston Globe notes:

Born on November 22, 1934, in Brieg, Germany, Maître lived through the war and turbulent post-war period in eastern Europe before he defected from East Germany to the West in the 1950s. He immigrated to the United States in 1983, settling with his family in Brookline, Massachusetts. An avid intellectual, Maître strongly believed in the freedoms he found in America. Disciplined, opinionated, and on occasion stubborn to a fault, he was ever eager to dialogue with and know the people around him. He was an accomplished skier and waterskier, with a lifelong passion for soccer.

“Professor Maître, ‘Yo’ to his friends, was an imposing figure who served as interim chair of the then Department of International Relations on more than one occasion and left a significant impact on the early years of the department and on generations of students” said Pardee School Dean Adil Najam. “I remember him as a ‘news hound’ in the truest sense – always informed and always eager to learn about what was happening in global politics in far off corners of the world. He would passionately devour international newspapers from all across the world in a pre-internet age when doing so required both time and effort.”

Prior to his tenure at Boston University, Maître served in a variety of academic and journalism positions in North America, Europe, and Africa. He was lecturer for the University of Nigeria, a foreign correspondent and editor for Die Welt, Chairman and Associate Professor of German at McGill University, the editor of Die Welt des Buches, a Press and Olympic Attaché for the Olympic Games of 1976, and editor-in-chief of Die Welt am Sonntag, the Axel Springer Verlag, and the Ullstein Buchverlag.

“Yo Maître brought a lifetime of experiences to Boston University. He experienced war as a child and Communist repression as a teenager and young man,” said William Grimes, Professor of International Relations and Political Science and Associate Dean for Academic Affairs at the Pardee School. “Having escaped across the border from East Germany to West Germany as a young man, he knew that the freedoms he enjoyed in Western Europe and North America were precious. He enjoyed that freedom, working as a journalist and professor across five continents. His own experiences as a journalist and political analyst inspired the graduate degree that is now the MAIA’s specialization in International Communication. He was a man of strong opinions, extraordinary linguistic gifts, and an often subversive sense of humor.”

“Yo was very interested in intelligence, especially how intelligence is used or abused for political purposes,” said Joseph Wippl, Professor of the Practice of International Relations at the Pardee School. “As a conversationalist, he was informed, interesting and had definitely a wicked sense of humor. He was proud of his family, BU, and the IR department.

Maître is survived by his wife Hella, his three children, Yoanna, Benjamin, and Alexander, and three grandchildren, Samuel, Maximilian, and Brandon. He will be dearly missed by his family, students, colleagues, and friends around the world.