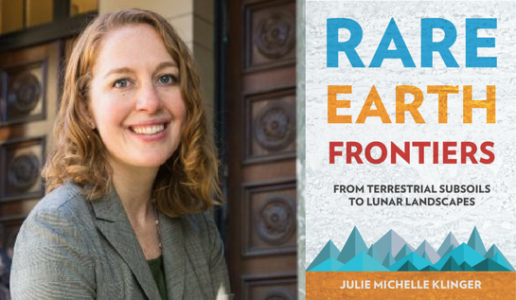 Julie Klinger, Assistant Professor of International Relations at the Frederick S. Pardee School of Global Studies at Boston University, recently published Rare Earth Frontiers: From Terrestrial Subsoils to Lunar Landscapes (Cornell University Press, 2018). In the book, Klinger writes about the devastating damage to lives and the environment caused by the exploitation of rare earths.

Rare Earth Frontiers is a work of human geography that serves to demystify the powerful elements that make possible the miniaturization of electronics, green energy and medical technologies, and essential telecommunications and defense systems. According to Klinger, the rare earths we rely on most are as common as copper or lead, and this means the implications of their extraction are global.

“I’m delighted that the book is finally out. It is the product of six years of research in China, Brazil, Germany, Australia, and the United States. I’ve dedicated this book to the people of Baotou and Bayan Obo, whose landscapes and lives have borne the burden of pollution few outside of the rare earth capital of the world can understand,” Klinger said. “I offer my book as a modest contribution to the efforts of people working for a more just and less violent future in rare earth mining sites around the world.  I hope this book will inspire us all to take a second look at our laptops, smart phones, and other technologies on which we rely. I want us not only to recognize the human and environmental costs of these technologies that most of us take for granted, but I especially want readers to dare to imagine how we might transform our political and economic systems so that we build these things without irreparably destroying people’s health or the environment.”

In the book, Klinger excavates the rich historical origins and ongoing ramifications of the quest to mine rare earths in ever more impossible places.

Klinger demonstrates in human terms how scarcity myths have been conscripted into diverse geopolitical campaigns that use rare earth mining as a pretext to capture spaces that have historically fallen beyond the grasp of centralized power including legally and logistically forbidding locations in the Amazon, Greenland, and Afghanistan, and on the Moon.

“I hope this book will enable readers to appreciate that the high technologies that most of us take for granted have their origins in the earth somewhere. To get these elements out of the Earth and into our technologies has relied on production practices that wreak environmental havoc and shorten people’s lives.  The history of the industry is inseparable from the history of global politics that has empowered some to impose this sort of sacrifice on others,” Klinger said. “The bad news is that we are all beneficiaries of this violence. An industry that is vital to life as we know it has an ugly history.  The good news is that we can write our own future to be more just and sustainable, and many researchers around the country and the world are working on precisely that.”

Drawing on ethnographic, archival, and interview data gathered in local languages and offering possible solutions to the problems it documents, Klinger examines the production of the rare earth frontier as a place, a concept, and a zone of contestation, sacrifice, and transformation.

Julie Klinger specializes in development, environment, and security politics in Latin America and China in comparative and global perspective. She is currently completing a book project on the global geography of rare earth prospecting and mining, with a special emphasis on the development and geopolitics of resource frontiers in Brazil, China, and Outer Space.